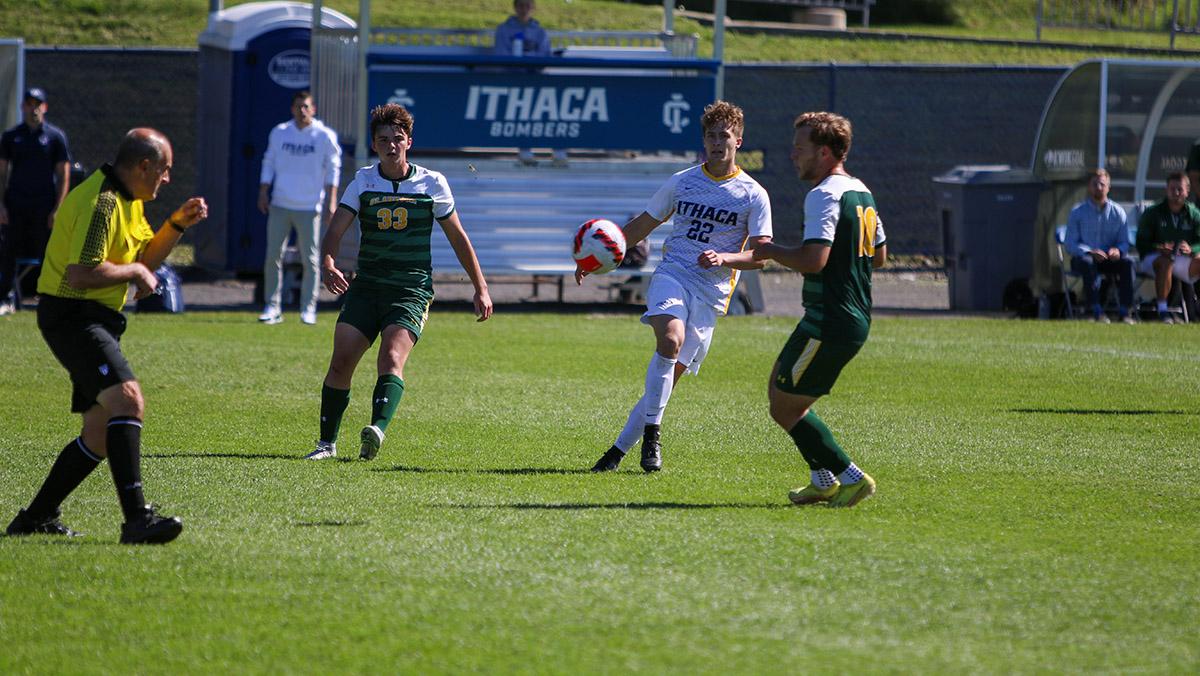 The Ithaca College men’s soccer team might not have won but saw a positive outcome nonetheless with a scoreless tie Sept. 24 against the No. 24 Clarkson University Golden Knights.

The Golden Knights, who were 6–0–0 coming into the game and are the only team in Division III yet to concede a goal, were a scary competitor for a Bombers team that has only managed to find the net three times on the season, leading to its 1–4–2 record going into the matchup.

The game was physical right from the start, with a foul being called on Clarkson mere seconds into the game, awarding the Bombers with a free kick from midfield. While it did not lead to anything, it set the tone early as the first of 19 combined fouls.

In the fifth minute, junior defender Conor Baird started to drive the ball down the near side toward Clarkson’s half but slipped on a cut and lost the ball on what would have been the first real chance for either side. Although the Golden Knights took possession, the Bombers would take it back and press for a few minutes before senior defender Alex Cabeca kicked one off a Clarkson defender, leading to a corner kick in the sixth minute.

The first official shots came at the end of the eighth minute, when the Golden Knights had a shot blocked by a Bomber defender before sending another shot over the crossbar 11 seconds later. Baird would get another chance with the ball in the 11th but lost possession in the box before sophomore midfielder Connor Tierney sent it out of bounds.

A moment of controversy came in the 22nd minute when the Bombers earned a throw-in and got some space, but the lead referee blew the play dead. After some shouting between the home sideline and the referee, it seemed that the lead referee thought it was Clarkson’s ball, but the side judge said it was the Bombers’. Although the Bombers kept possession, the moment was lost, and a shot was wrapped up safely by the Golden Knights goalkeeper.

The Golden Knights had a golden opportunity in the 34th when a shot got tipped up and around near the net, but the shot attempt went wide left of the net, keeping the game scoreless. First-year student forward Andrew Kusek would send a cross into the box, but no one was able to grab it.

The best chance for either team in the entire game followed, as Tierney stole the ball near midfield and maneuvered his way to a one-on-one with the goalkeeper. The sophomore made a great move to get past the last defender and had a perfect shot but sent it straight into the arms of the Clarkson goalkeeper. Neither team would come as close for the rest of the game.

The Bombers did earn an indirect free kick just outside of the box in the 42nd and a corner in the 45th, but nothing came of either chance. The teams broke at the half, still tied at 0.

Although the Bombers did not look as good or energetic in the second half as they did in the first, Clarkson could not get anything going for most of the half. Despite several chances and pressuring the Bombers for minutes at a time, the Golden Knights only managed one shot in the half, which came in the 51st minute.

The Bombers earned a corner kick in the 66th minute, and it looked like a good opportunity when senior defender Brendan Lebitsch headed it into the box and got it past the goalkeeper, but he recovered in time to save the shot from first-year student forward Nathan Waychoff. The Bombers earned another corner immediately after, but Clarkson cleared it away quickly.

Neither team was able to get a clear chance for the rest of the game, despite their best efforts, and the final whistle came in the 90th minute with both teams knotted at 0.

Senior forward Aidan Keenan said after the game that although they did not win, it was a good outcome for a team that has struggled so far this season.

“As long as we didn’t lose, it’s a good time,” Keenan said. “They’re a ranked team, they’re undefeated so far and haven’t let in a goal, so it’s a good result for us.”

Keenan said the team knew it would be hard to score against the Golden Knights, but he was proud of the way his team stuck to the game plan and kept the ball on the ground.

“We’ve been trying to play a little bit more of a passing style instead of just kicking it long,” Keenan said. “We’re just going to play the way we know how to play, and it almost came off. We just didn’t get one, but I think we had a lot of good chances.”

The team only gets a few days of rest before traveling to Hobart College to take on the Statesmen at 4 p.m. Sept. 28.