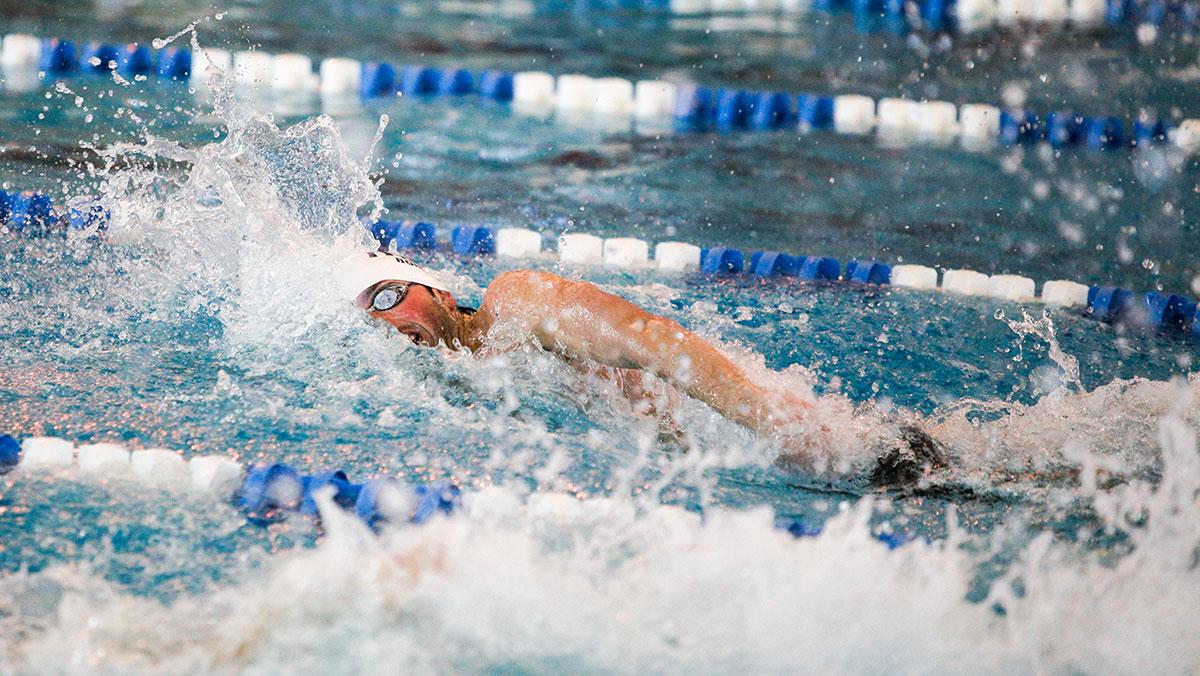 Tucker Mitchell/The Ithacan
Junior swimmer Adam Zelehowsky swims in the 200-yard freestyle during the Bomber Invitational on Dec. 7, 2014 at the Athletics and Events Center. Zelehowsky finished the race in a time of 1:42.46.
By Karly Redpath — Senior Writer
Published: February 24, 2015

With a team of only 23, one of the program’s smallest to date, the men’s swimming and diving team managed to go undefeated for the first time in over a decade.

After five-straight one-loss seasons, finishing with a 15–0 record this season for the first time since 2003 was a huge accomplishment for the Bombers. Despite this achievement, it was kept relatively on the quiet side by head coach Kevin Markwardt.

“We know that Kevin is proud of everything that we accomplished, but he doesn’t often show it,” Marks said. “At the end of the season, he was like, ‘I haven’t said much to you guys, but you went undefeated and that’s huge. That’s something that we didn’t think that we were going to accomplish, but you guys really put in the work.’”

Senior freestyler Logan Metzger said the undefeated finish for the Blue and Gold during his last year on the team was the adornment of his Bomber career.

“I guess for us during our freshman, sophomore and junior year, really, we were all one meet away from being undefeated,” Metzger said. “We still did really well, and we obviously had really great seasons, but it’s cool that we brought this team together and even though we have a much smaller team than in years past we pulled through.”

Metzger said the annual quad meet Nov. 22, 2014, in which Hamilton College hosts the Bombers, SUNY Geneseo and Hartwick College is one they always look forward to because it is usually the most challenging and most exciting for the team. The Bombers earned a victory last year in the meet by only one point over Geneseo. Although they beat the Knights by 32 points this year, Metzger said the team was no less enthusiastic on the pool deck.

“We’re always the loudest team out there, we’re cheering for each other and you can feel the energy,” he said. “You get up there and you know that you have the entire team behind you, supporting you and wanting you to do your absolute best. And I think that really translates to better swims in the pool.”

After losing six talented seniors last year and many others to injury or study-abroad programs, senior freestyler Clement Towner said much of the team’s success is attributed to its smaller size.

“Having fewer numbers this year meant that every single one of us knew we had a job to do,” Towner said. “We knew every time we got up on the block, we had to give it everything we had. There was no, ‘Oh, I can sit back and let somebody else take this.’ Every race was crucial.”

The coaching staff also made the decision to incorporate other forms of training into the program during the season. They hired a lifting coach, who helped the swimmers learn proper techniques throughout the season and also integrated dry-land training on top of the training in the pool. This, the swimmers said, helped them get stronger and be more confident on race day.

Marks said perhaps most importantly this year was the team’s choice to live in the moment and not dwell on victories.

“We would win a meet and we would come in on the following Monday and there’s little, if anything, said about what we did,” he said. “We’d win the meet, everyone knew we swam well, we’d have a good bus ride home, everyone’s psyched and then Monday it’s back [in the pool] to get to work.”

Towner said a first-place finish in the Upper New York State Collegiate Swimming Association Championship/Empire 8 Championships, which took place from Feb. 18–21, would have allowed his collegiate swimming career to come full circle. The team, however, finished second out of 15 teams for the third year in a row to Stevens Institute of Technology.

It was the eighth-straight time they have placed within the top-three teams at the championships.

Senior diver Matthew Morrison said his last showing at the Empire 8 Championships exceeded his expectations, and at the event this year he faced a challenging set of competitors.

“I was really stressed leading up to it because a lot of my competition had returned after taking last year off,” he said. “It wasn’t until each competition day started that I could get in the zone and [feel] confident. We’re all close friends in our conference and wanted each other to do our best. I would have been happy no matter where I finished.”

Morrison, the lone diver for the men’s team, has placed first in all of the Empire 8’s 1-meter and 3-meter competitions since his sophomore year, something that no other diver in Ithaca College history has achieved.

Now the Bombers will look ahead to the NCAA Championships, which take place March 18–21 in Shenandoah, Texas. Morrison said he hopes he and his teammates can finish out the season on a high note.

“I can only hope that as many of us make it as possible. I’m hoping to go back and simply do better than I have than the past two trips,” Morrison said. “I’ve learned a lot from going to Indiana last year and Texas the year before and can only hope things fall into place this last time around. Ithaca has always had a great presence on the national stage and this year should be no different.”