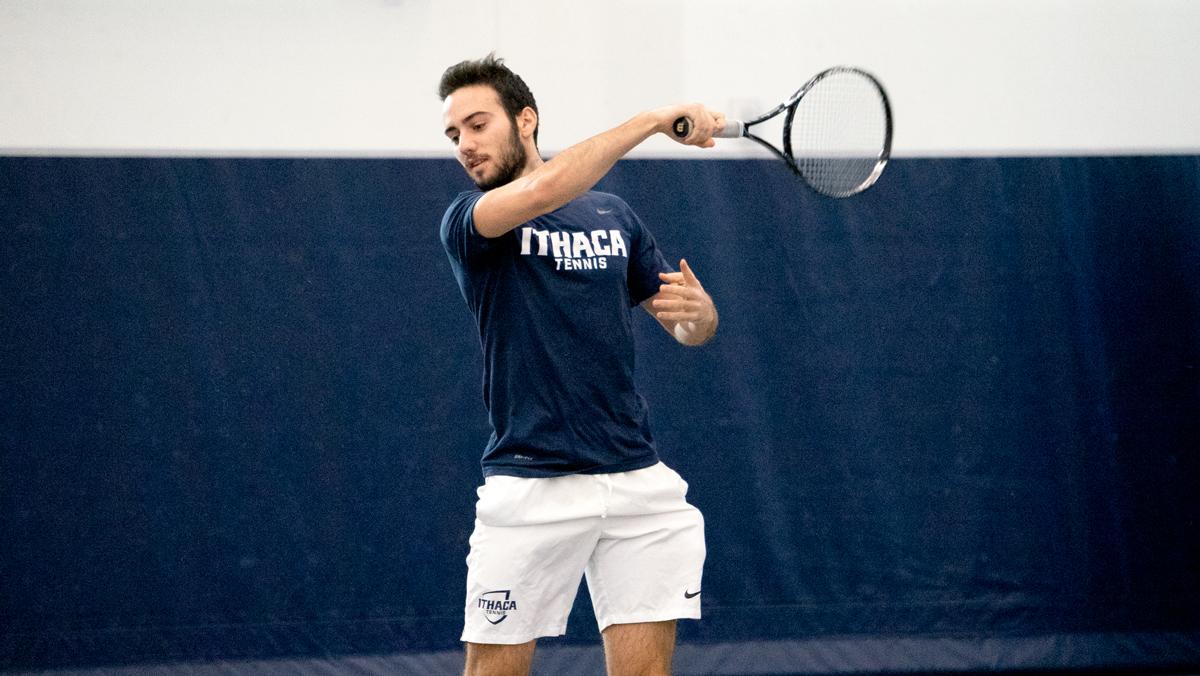 When the Ithaca College men’s tennis team finished its fall portion of the season in September, its main focus was on improving its doubles play.

The Bombers went 6–10 during their first season in the Liberty League. This was the team’s first losing campaign since the 2012–13 season. One of the areas where the Blue and Gold struggled was with their doubles portions of the match. This is important because the doubles games are the first three games of the match, so going into a 3–0 hole puts the team in a tough situation heading into singles play.

Senior captain Sam McGrath said if the team can improve its doubles play, he anticipates that the team will be able to be much more successful in the spring season.

The fall portion of the season consisted of five tournaments of individual play. The matches did not impact the team’s record, instead serving as an opportunity for the players to develop chemistry with each other and show how much they had improved since the last season. Head coach Bill Austin said the fall portion of the season is crucial because it helps him figure out what the lineup should be when the league season starts in the spring.

Junior Minos Stavrakas, who is the Bombers’ top singles player and went 7–1 within the Liberty League during his sophomore season, said he noticed an increased desire from his teammates to work out off the court.

“The whole team seemed more engaged during the offseason,” Stavrakas said. “People were hitting the gym a lot more and we had the courts available to us more than in other years. Many people came and practiced more. I think we will be better than last year because of that.”

Austin said the offseason commitment he saw from the team allowed for quicker advancement during the offseason training, as less time was needed to get the players in shape before the season.

“They did a lot of offseason work,” Austin said. “The captains did a great job of continuing what we did in the fall, so as we got into February, it wasn’t like we were starting from scratch. They kept everyone engaged and everybody hitting.”

The team will be heading to Orlando, Florida, for its spring break trip and will be taking on several high–quality opponents. It will face teams like Bentley University and Bloomsburg University, which are both Division II teams, as well as Wesleyan University, which is currently ranked No. 12 in Division III. Stavrakas said that playing these matches shows how strong of a program the college has.

“The fact that good teams want to play us shows that they value us in some way,” Stavrakas said. “They saw something good enough, and they want to play with us.”

After the trip, the team will head into a stretch where it faces Hobart College, Vassar College and the Rochester Institute of Technology over a span of six days. From there, the Bombers will continue their Liberty League slate and cap it when they face the Rensselaer Polytechnic Institute, the defending league champion. Stavrakas said the Hobart and RPI matches will be notable.

“My only loss in the Liberty League last year was to RPI’s top player, so my goal this year is to beat him,” Stavrakas said. “We also want to beat Hobart. That would be one of the games to circle the date.”

Austin said the team will have to continue to improve and focus on doing things fundamentally if it wants to succeed and make a deep league tournament run.

“We want to continue to get better,” Austin said. “Obviously, the goal for any program is to try to win the league, but there are a lot of steps that have to go each time out, and we have to take care of the steps between now and then and continue to work hard and enjoy each other and the game.”

McGrath said that while his competitive tennis career is nearing its end, he is excited to see how far this team can go, and what kind of hardware it could potentially bring back to South Hill.

“I want to win playoffs,” McGrath said. “As a senior, going out like that would be huge. I am aware of how tough it will be, and while it may be a ‘rebuilding’ year for us, I don’t see it that way. We have the leaders on the team who really think we can win the league tournament. I also want to be nationally ranked.”