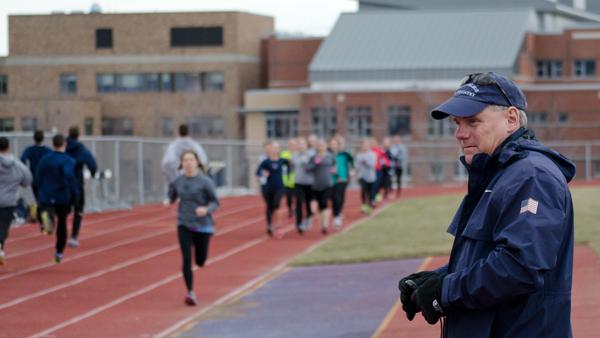 With 26 seasons in the Ithaca College program, men’s track and field Head Coach Jim Nichols has been awarded his seventh honor and sixth consecutive Empire 8 Coach of the Year Award. This accolade was awarded to Nichols after a successful indoor season, where the Bombers won their first New York State Collegiate Track Conference Championship since the 2001 season.

With the beginning of the 2013 outdoor season just around the corner, Nichols said he is interested to see what “mark” the Blue and Gold can leave on the outdoor track.

Staff Writer Haley Costello spoke with Nichols about winning the award and looking ahead to the outdoor season.

Haley Costello: What was it like coaching the indoor season?

Jim Nichols: Every year is different, because every year a team has a different personality. That’s the beauty of watching [classes like] the seniors and seeing how they respond compared to when they were freshmen to now being leaders. That’s why I coach. This season, the men won the second indoor championship ever in school history, and it’s the first state indoor championship won by the men ever in [the Athletics and Events Center]. We may win 20 more, but this group can say they were the first to do it, and that’s exciting and special for this group and this season.

HC: What was it like to receive your seventh Coach of the Year Award for this season?

JN: In some ways it’s not relevant to me, because I don’t need those. I really appreciate that I received it, and it’s a great distinction for our staff, but my job is to educate the students and the coaches in our program. The great benefit of athletics comes from being involved in an educational institution. As long as the kids are truly committed to the program and getting a learning experience, that’s what I’m looking for. I don’t need the award to tell me we are doing a good job.

HC: Did you do anything differently this year through training or team bonding to help you achieve this success?

JN: Not really. This group had a unique personality, a lot of leadership and a great team dynamic coming in. The seniors will be hard to replace. They set a high water mark for our underclassmen, but they have also set a standard that these guys can follow and try to emulate and improve upon. We are excited to look to the outdoor season to see what kind of growth they can make and see the mark they will leave [in outdoor] for the underclassmen.

HC: What was the highest point of the indoor season, and could this have an effect on the outdoor season?

JN: I think the highest point was when we won the indoor championship, because it was really exciting for the group. Our success will be hard to duplicate, especially where [the meet] won’t be at home. During indoor, we hosted the Empire 8 Championships, and for outdoors we are going to be at Nazareth College, so those are big differences. The challenge is can they duplicate what they did indoors at home while on the road and travelling.

HC: Is there anything that you wish you can change about last season that would have benefitted the team during indoors and been helpful with outdoors?

JN: Well, I had some personal issues at the end of the indoor season, which hurt at the ECAC Championships because I wasn’t there for the first day. So I had to handle that stuff because that’s life, but I think the athletes handled it really well. The emotion they put into the state championship, which was very emotional for them, probably took a little bit out of them going into ECACs also. That’s experience for them, and I am sure they will learn from it going into the outdoor season.

HC: What type of effect does your award have on the upcoming season?

JN: I think it’s recognition of the hard work everyone has put in and the success they have had. It helps them to know it’s a group effort to work for the success of everyone. It’s not an individual award. A coaching award is an award based on an overall team performance, not my performance as an individual. It sets a standard that challenges our kids to try and do it again this season.