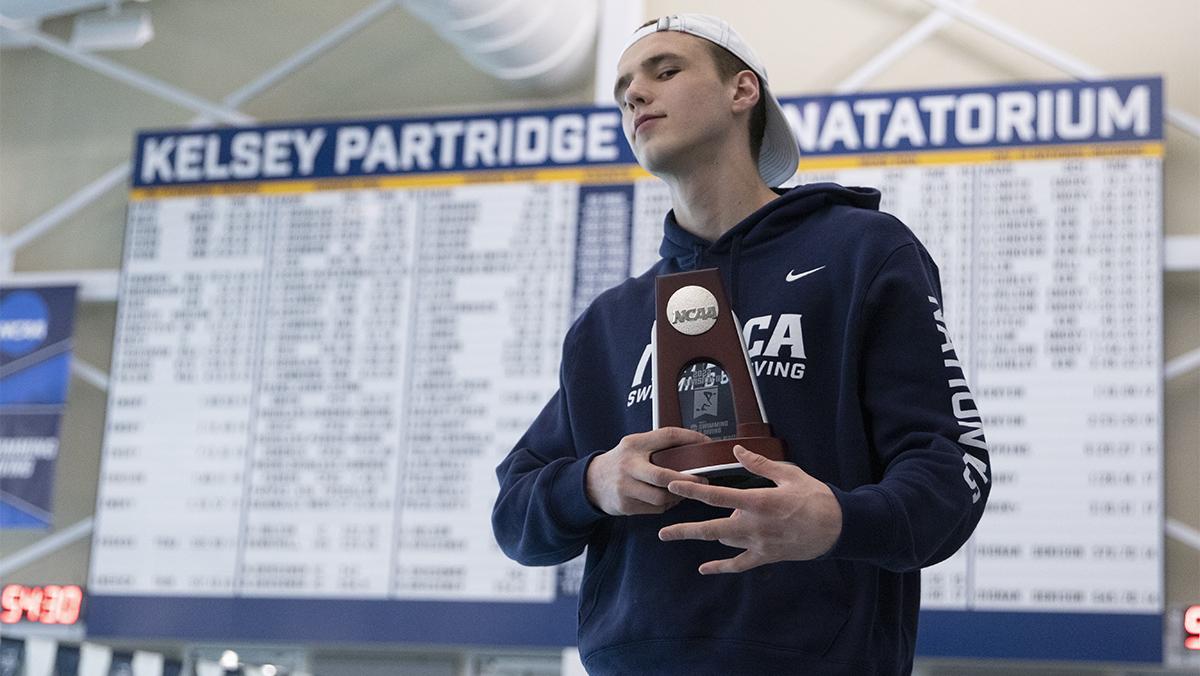 At the NCAA Division III National Championships from March 16 to 19, sophomore swimmer Jack Wadsworth set a Division III record in the 100-meter backstroke with a time of 46.45 seconds. But just a few weeks later, he announced via Instagram that he would be transferring from the Ithaca College swimming and diving team to Division I Arizona State University (ASU).

Wadsworth had a strong sophomore campaign as a Bomber, his first season on the team because of the COVID-19 pandemic. During the 2021–22 season, Wadsworth was named an All-American and won the Liberty League Men’s Swimmer of the Year award. At the national championships, Wadsworth also won the program’s first national title since Colin Herlihy ’96 in 1996 with his record-setting time in the backstroke.

Mike Blakely-Armitage, assistant coach on the men’s swimming and diving team, said he talked to Wadsworth during the transfer process and told his swimmer that the coaching staff at the college would help him as much as they could. Blakely-Armitage said Wadsworth felt confident that his performances at the college indicated that he was ready to take a step up in competition.

“He had indicated to us that, because of some of his results, he thought he could swim at the next level,” Blakely-Armitage said. “We said that if you’re interested in doing that, we’re going to coach you with this particular season in mind and we’re going to keep focused on completing this season. And if you feel like you’re ready to move to that next level, we can have a conversation about it and talk about the pros and cons. And we’ll be supportive of you in whatever avenue you take.”

Mark Brand, senior associate athletics director of Media Relations at Arizona State University, said in an email that the university did not comment on recruiting. Wadsworth said he was excited to get started with the university so he could learn about the process and become the best swimmer he can be.

“I’m transferring to ASU because of the elite coaching staff and I feel like my talents would be better suited at a top Division [I] program,” Wadsworth said in the email. “I’m excited to be teammates with professional athletes and work to become one just like them.”

In an Instagram post, Wadsworth said he had verbally committed to Arizona State University and that he was excited to get started.

“A huge thanks to Coach Bowman, Coach Behm, and the rest of the coaching staff at ASU for giving me this opportunity,” Wadsworth said in the post. “I’m also very grateful for my friends, family and the coaches and team here at Ithaca College for their continued support.”

During the process of transferring, Wadsworth gained attention from a few different programs. But sophomore swimmer James Collishaw said that Wadsworth was excited by the prospect of going to Arizona State University and to swim with the coaching staff at the university because of the recent success of the program.

Once Wadsworth had made the decision to transfer, he had to tell the team about his decision. Blakely-Armitage said the team reacted by congratulating Wadsworth and backed him in his process of transferring.

“I think a lot of [the team’s reaction] was support,” Blakely-Armitage said. “They have a really strong culture. And I think people want everybody to do well. Of course they’re sorry to see him go, but I think they don’t want to hold him back. … I think if he wants to pursue other goals, then they were supportive of that.”

When in the pool, Blakely-Armitage said that Wadsworth helped to push the swimmers to be the best that they could, which made an impact on how the team performed. Collishaw said that he was glad he had the opportunity to compete with and to learn from Wadsworth, even if it was short.

“It was known by the team that Wadsworth is unreal as an athlete,” Collishaw said. “It was just a blast to just train with [Wadsworth]. We both push each other hard in the pool. It was just super special. And the people on this team are just so supportive of him, and I think he can do great things wherever he goes.”

Collishaw said that Wadsworth’s effort and commitment to training hard with many of the swimmers helped to form a strong bond between him and the team.

Junior swimmer Holden Shatouhy said that the bond that Wadsworth formed with the team was strong and that the team is interested in following him while at his new school.

“It definitely is sad that he is transferring, that’s for certain,” Shatouhy said. “But the rest of the team and myself will definitely be keeping track of what he does in the future. We are super excited to see what he will accomplish at ASU.”

Collishaw, who will be stepping up as a captain on next year’s team along with Shatouhy, said that while it will be tough for him to fill that gap, he believes that the team has enough talent to not become too affected by losing Wadsworth.

“We have tough shoes to fill on the swimming team,” Collishaw said. “Jack is a national champion and a national record holder, but I always just try to be a strong voice on the team. I just try to be vocal and supportive of everyone. And I think it’s just similar for the whole team. It’s a very good group we have on this team. Everybody’s behind everyone else. It’s an environment where everybody can succeed because everybody’s just so caring for one another and just very supportive. So they make it pretty easy for us going forward.”