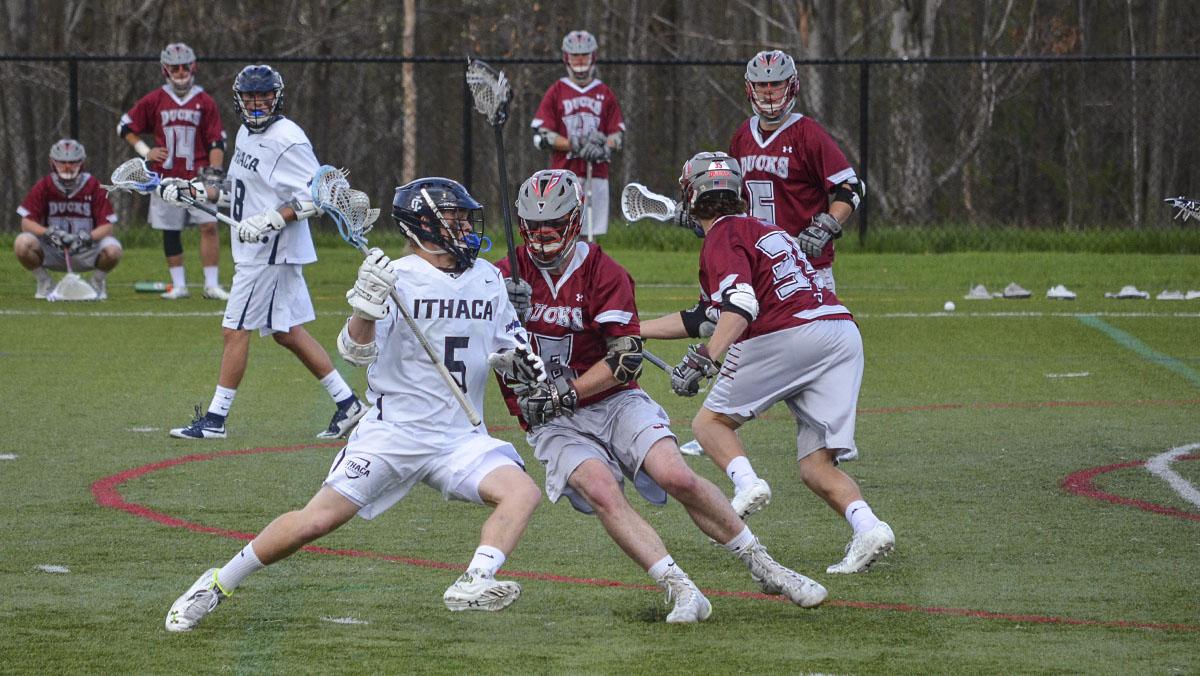 FERNANDO FERRAZ/THE ITHACAN
Freshman Josh Della Puca had one goal and one assist in the Bombers win against Stevens Institute of Technology May 7.
By Matt Hornick — Staff Writer
Published: May 8, 2016

The No. 1 nationally ranked Ithaca College men’s lacrosse team won its second Empire 8 Championship in three years in a 15–11 victory over Stevens Institute of Technology. This is the Bombers’ 16th consecutive win, and they have now clinched an automatic bid to the NCAA tournament.

Junior attackman Jack Shumway, who was set on winning the conference from the beginning of the season, said finally doing so was a rewarding feeling, but now the team has its sights set higher.

“It’s a sense of accomplishment, being able to bring home an E8 championship, but now we’ve secured three more days for our seniors to play lacrosse, and we want to give them as many more days as possible,” Shumway said.

While the team is now in the running for a national championship, head coach Jeff Long said the team is only focused on the next game.

“We’re still trying to take it one game at a time,” Long said. “I don’t think we played all that great today, but we survived, and we’re gonna practice Monday and Tuesday and try to play a good game on Wednesday.”

The South Hill squad went on a five-goal run to start the second quarter to take the lead and ended the first half up 8–6. Shumway netted two goals in the quarter along with one each from Fitzpatrick, sophomore attackman Jake Cotton, sophomore midfielder Stephen Morrell, and freshman midfielder Connor Crosson. The Ducks scored three goals in the quarter from three different players: Boutureira, freshman midfielder Dean Peluso and junior defenseman Chris Contino. Contino found the net from halfway behind the midfield line.

The third quarter featured a comeback for the Ducks. The Ducks allowed alternating goals with the Bombers and topped the quarter off with three consecutive goals. Cotton started the action with an unassisted goal, which was answered one minute later by freshman attackman Max Bailey. Junior attackman John Januszkiewicz scored again for the Bombers, and then Boutureira, Peluso and senior midfielder Colin Sawula scored three goals to end the third quarter with the game tied at 10

The Blue and Gold put the game away in the fourth quarter. After almost five minutes of scoreless play, freshman midfielder Josh Della Puca netted his 25th goal of the season to give the Bombers the lead. Sophomore defenseman Keith Morrissey ran the length of the field to score his first goal of the season and put the Bombers up 12–10. Shumway sealed the deal after that with two straight goals to give the Bombers a four-goal lead with four minutes and nine seconds remaining in the game. Senior midfielder Matt Ferentini tried to start a comeback for the Ducks with a goal of his own, only to have it answered by Fitzpatrick within 30 seconds.

Senior goaltender Scott Sidnam got the win between the pipes, notching 14 saves on the day.

The Bombers’ next matchup will be in the first round of the NCAA tournament May 11, and their opponent will be revealed May 8 during the selection show.