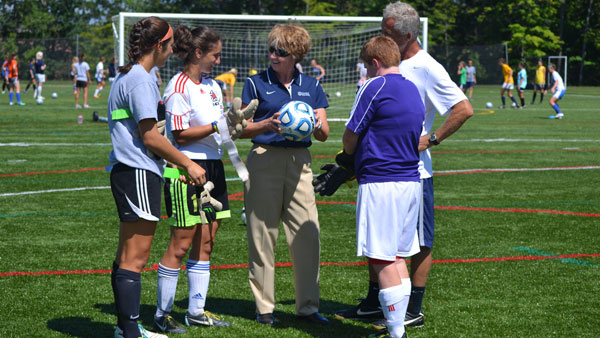 Under the leadership of former athletic director Ken Kutler, Ithaca College’s sports program experienced success from 2002 to 2012. The program took home the Empire 8 Commissioner’s Cup, an award recognizing the most accomplished athletic department in the conference, in each of Kutler’s 10 years. When Kutler retired last spring, the college was faced with a personnel decision that would determine the direction of its athletic programs.

The newly minted athletic director plans to cultivate growth in Bomber sports by utilizing her expertise in athletic programs and leadership with IC 20/20 to enhance the student experience on all levels of athletics. IC 20/20 is the college’s strategic plan to develop the undergraduate learning experience beyond the classroom.

Bassett earned her bachelor’s degree in physical education from the college, where she also played one season of field hockey for the Bombers until injuries cut her athletic career short. She then received a master’s degree for physical education at Indiana University.

After a successful career as the head swimming and diving coach at both William Smith and Union Colleges, William Smith hired her as the athletic director. She served there until she took over as director of athletics, physical education and recreation at Carnegie Mellon University in 2005, the same year that she was inducted into the Ithaca College Hall of Fame for her success as an athletic director, coach and mentor at the Division III level. She held the position at Carnegie Mellon until she took the athletic director position at Ithaca College in May.

Her success led to a number of awards. Most recently, the National Association of Collegiate Women Athletics Administrators named her the 2013 Division III Administrator of the Year. Bassett is a past president for the NACWAA and was given the award based on previous accolades, including a 2010 Under Armor AD of the Year Award.

Josh Centor, interim director of athletics at Carnegie Mellon and former assistant to Bassett, said her passion for the athletes earned her much respect during her time there as athletic director.

“I’ve never come across anybody who is as passionate and supportive of the student experience as Susan,” Centor said. “She was wholly committed and devoted to doing everything she can to create opportunities for students.”

After Kutler announced his plans for retirement, the college assembled an 11-person selection committee that interviewed potential candidates. The committee looked beyond her recognition and saw a well-rounded, experienced leader that could immediately make a positive impact at the college. That committee then recommended Bassett for the position, and Marisa Kelly, provost and vice president of educational affairs, ultimately appointed Bassett.

Chaired by Margaret Arnold, associate dean of health science and human performance, the committee agreed that Bassett’s experience in both intercollegiate athletic departments and recreational sports made her the most qualified candidate for the job because of her vision of integrating IC 20/20 into the athletics program.

With the implementation of IC 20/20, the college is in the midst of an institutional overhaul. A focus on the future and a forward-thinking disposition were important in the committee’s selection process, and these qualities stood out in Bassett.

“Susan Bassett spoke everybody’s language,” Arnold said. “When she met with senior level administrators, she spoke very clearly about IC 20/20 and how athletics and recreational sports can play a role in IC 20/20. You could just sense that all of her experience came through in all facets of the institution.”

Integrating the athletics program with IC 20/20 is an important priority for Bassett, and she plans to use it as a platform to enhance the student-athlete experience in a number of ways, including strengthening student-alumni relations, expanding opportunities for international travel and incorporating more intramural athletics in the First-Year Residential Experience.

“IC 20/20 is here,” she said. “It’s being implemented. It’s a part of the life of the college. What we are going to do in athletics is support that effort and contribute when we can.”

International travel is also a key part of Bassett’s idea of integrating with 20/20’s global learning opportunities initiative. She plans to give teams an opportunity to travel and compete in foreign countries, allowing students to immerse themselves in other cultures and compete on a global platform.

Bassett said by expanding international travel, players gain experiences that they are not afforded in the classroom or on the field.

The increased opportunities do not just span over varsity sports. Bassett plans to incorporate intramural sports into the FYRE. She said promoting activity in the residence halls will not only encourage participation in athletics, but will also create bonds between the first-year students.

One of her ideas for introducing intramural competition into residence halls is creating opportunities where students who do not normally participate in athletics can do so with students who share the same living environment.

She also plans to create a more efficient budget process by moving up deadlines. Earlier deadlines will give coaches and athletic administrators additional time to lay out a more effective budget plan. This will allow coaches to finalize schedules earlier and, in turn, save the college money.

Dan Raymond, women’s basketball head coach, said Bassett’s plans have roused the spirits of the college’s athletic community, creating an expectation of upholding and improving on the high standards set by Kutler.

“She is an optimist, but also a realist,” Raymond said. “Her reputation is outstanding. I … feel very optimistic about the future of our athletic program. She’s going to be a visible leader. That’s the most exciting thing for me, feeling like I’m on her team and she’s on our team.”

With an ambitious vision for improving the athletic department, the outlook for Bomber sports offers no guarantees, but the future of the college’s athletics program is here.