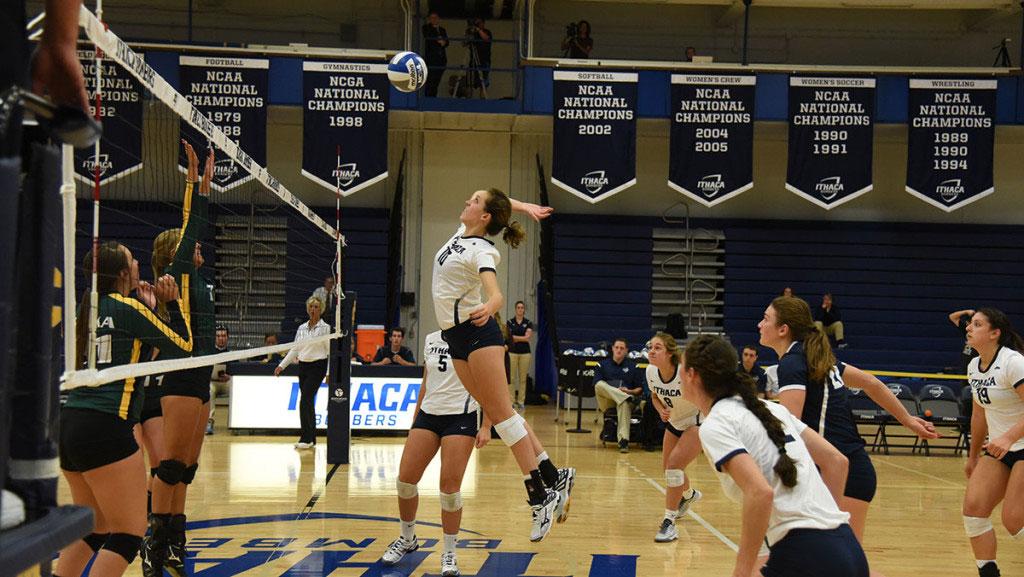 After finishing last season with an Empire 8 Championship title and a second-round loss in the NCAA Division III Championship, the Ithaca College volleyball team plans to advance further into the NCAA tournament this year — under new leadership.

Dulfer replaced Janet Donovan, who announced Jan. 15 that she was resigning from her position. Donovan coached the Bombers for 24 seasons and is the college’s winningest volleyball coach, achieving a 674–295 record.

Junior Izabella Mocarski, defensive specialist and outside hitter, said that with just a glimpse of Dulfer in the spring, she can tell the training will be different from how it had been in the past. Whereas past coaches have focused on strengthening their attack or serve receiving, she said, Dulfer’s drills have focused on consistency in serving and ball control on their side of the court.

“He has already introduced us to a whole new system of play that includes a variety of drills, philosophies and keys to success,” Mocarski said.

This season, the Bombers will face top opponents to prepare for the postseason. They will begin the season at the North Country Season Opener on Sept. 2 in Canton, New York, competing against SUNY Brockport and St. Lawrence University. On Sept. 3, they will compete against Juniata College and Clarkson University in Potsdam, New York. Clarkson was ranked No. 18 by the American Volleyball Coaches Association last season, and the Blue and Gold lost to the Golden Knights  3–1 in the NCAA Division III Championship.


Another big team the Bombers will face is Wellesley College, which defeated them 3–2 last season during the Wellesley Invitational. The South Hill squad will take on Wellesley this season Oct. 14 in Wellesley, Massachusetts.

Dulfer said he believes that, as a program, the team should be taking a national championship. The Bombers have never made it to the final championship game.

“I am excited to see if we can get further than any New York team has ever gotten,” Dulfer said. “We intend to prove them wrong about New York not winning a national championship.”

Dulfer said to beat the top teams, the Bombers need to become more physical. Additionally, Dulfer is currently working on a long-term goal for the team, which he said will not be talked about until he finalizes the roster and gets a better look at the team as a whole.

“We are going to try in preseason to install new wrinkles to our offense and system,” Dulfer said.  “We need a secret weapon and ways to beat the big dogs in the country.”

The Bombers ended their 2015 season with an overall record of 31–5, following their 25–11 record in 2014. The squad won the Empire 8 Championship by beating Nazareth College and Stevens Institute of Technology without giving up a set in six matches.

After winning the Empire 8 Championship, the Bombers moved on to the NCAA Division III Championship, where they defeated Williams College in all three sets. The team then went on to play Clarkson but ended up losing 3–1.

One thing Mocarski said the team can improve on is consistency.

“There would be moments on the court where everything would just ‘click,’ and we would go on huge runs, and others when we would make a few careless mistakes, and the momentum would just disappear,” Mocarski said.

Mocarski said the team is already familiar with how each player plays individually on the court.

“We know how to lift each other up whenever we’re down, and most importantly, trust each other, which normally takes time for teams to build up,” Mocarski said.

Sophomore outside hitter Haley Adler said the team is dynamic and there is a plethora of strong and talented players.

“A lot of players have the ability to play multiple positions, which helps to expand our capability as a team,” Adler said. “We also can work together as a whole instead of as individual players.”