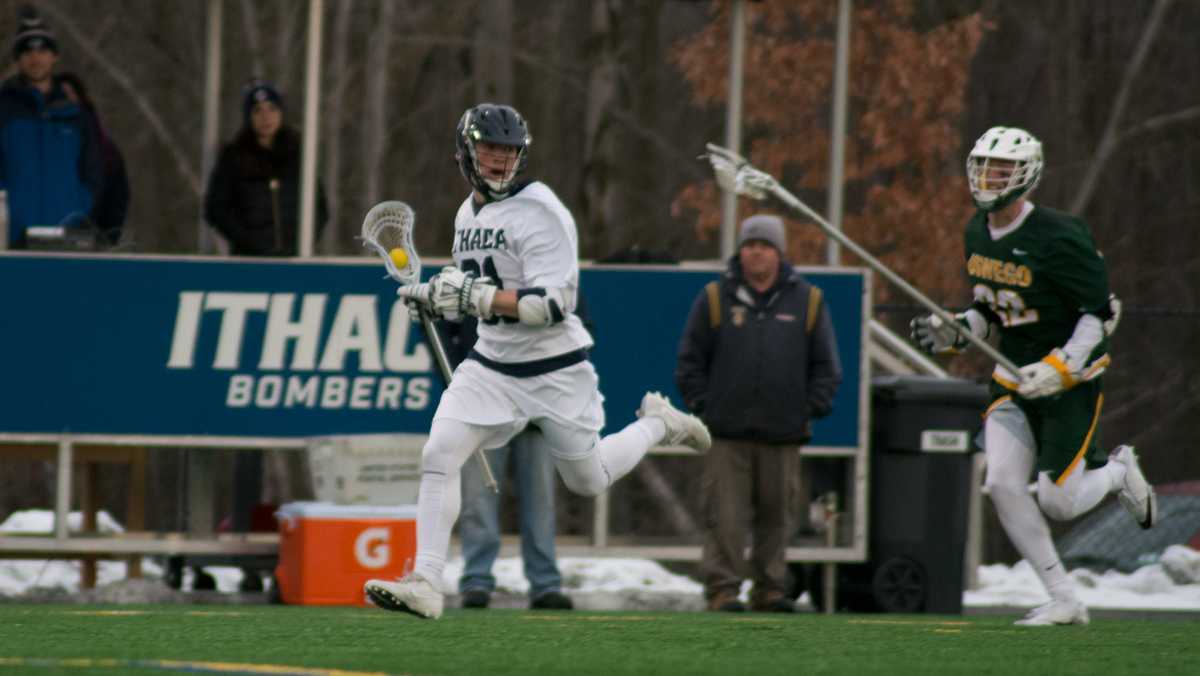 The No.16 Ithaca College men’s lacrosse team defeated Oswego State 14–5 March 7. With the win, the college has now won consecutive games and is 2–0 on the season while Oswego State drops to 1–1.

The  Bombers had a strong control of the game in the first quarter, as the score was 5–0 heading into the second frame. The opening goal of the match was scored by sophomore attack Ryan Ozsvath at the 10:43 mark for his sixth goal of the season. The South Hill squad overpowered the Lakers offensively in the first quarter, as they outshot Oswego 14–4.

Ozsvath was impressed with how the Blue and Gold’s offense played in the game.

“We did a very good job moving the ball on offense this game,” Ozsvath said. “We were always able to find the crucial pass that got us the goals when we needed them, and because of that, we looked very dominant throughout the game.”

The Lakers had 12 turnovers in the second quarter and were only able to put three shots on net. The Bombers continued to pour on shots as the team had a quarter high 15 shots and Ozsath scored two more goals, completing his hat trick.

Going into halftime, the college was up 7–0. Head coach Jeff Long said he was not completely satisfied with how his team was playing.

Oswego State scored the opening goal of the second half, but the Bombers came back firing as they answered back with three goals making the score 10–1. Senior attack Jake Cotton led the way for the South Hill squad in the third quarter with two assists, bringing his total up to three on the game.

The college took little time closing the game out in the fourth quarter, as the team scored four consecutive goals to take a 14–2 lead with 13:34 remaining. Oswego would go on to score three more goals, but the team’s efforts fell futile and they were not able to make a comeback.

The Blue and Gold is back in action at 1 p.m. March 10, as the Bombers travel to face Skidmore College in the teams first ever Liberty League Conference matchup in Saratoga Springs, New York.