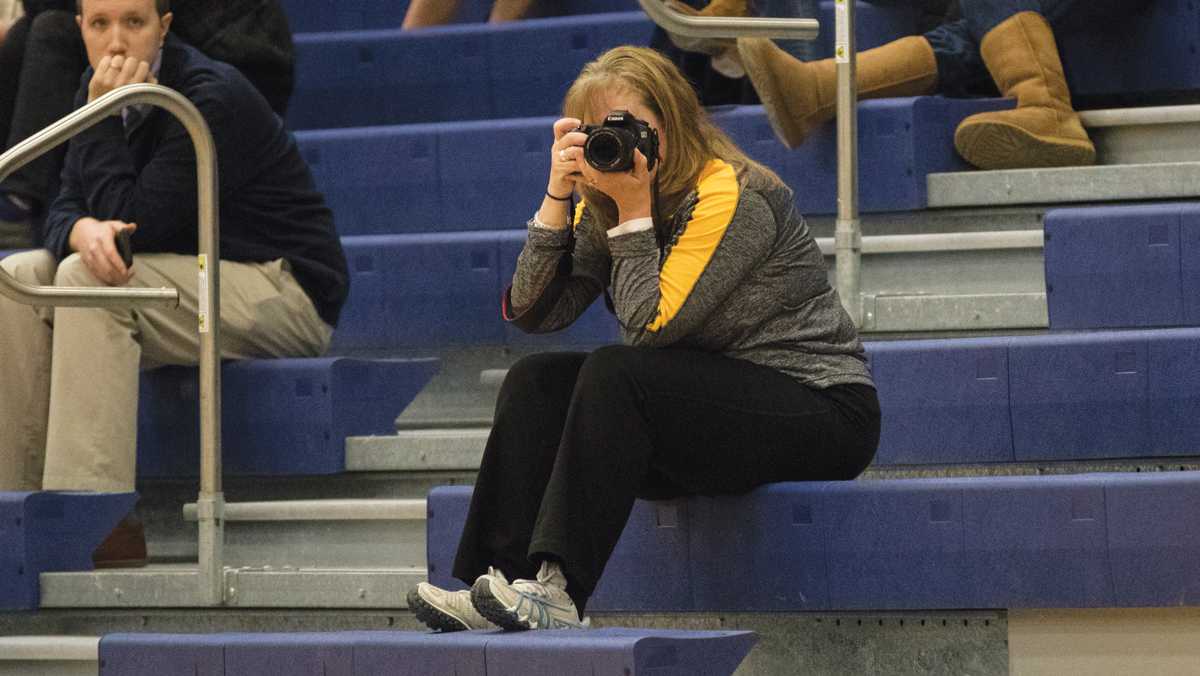 At Ithaca College women’s basketball games, parents fill the bleachers in Ben Light Gymnasium to cheer on their daughters. These parents, over the course of their daughters’ collegiate careers, have grown very close to each other and the players.

The team’s families play a huge role by not only supporting the team, but by helping organize gifts, planning team dinners and organizing meals and hotels for away games.

Sue Jackson, mother of junior guard Sara Jackson, takes pictures of every Bombers’ game. She has been taking pictures of Sara’s basketball and volleyball games since middle school.

“Taking pictures at the women’s basketball games was second nature,” Sue said. “Finding a spot on bleachers, on the floor, or behind the bench, I watch the girls play through the lens of the camera and rarely miss a play.”

Sue said she has received gratitude from players for taking pictures. She said that former player Ali Ricchiuti thanked her for capturing moments from her career.

“Ali Ricchiuti came up to me at the end of the season and said, ‘Thank you for chronicling the last two years of my basketball career, it is really special.’” Sue said.

All the parents have become very close from watching the games together. They all go out to eat together and stay in the same hotels when the team travels.

This is largely due to the “team mom,” Elaine Yacovoni. Elaine, mother of senior forward and guard Julie Yacovoni, said that she is largely in charge of communicating with the rest of the families. Elaine makes sure that everyone is on the same page when staying at hotels and making sure everyone feels close with each other.

“I try to make everyone into one family and I go around and talk to everyone and introduce everyone in the beginning of the season,” Elaine said. “When everyone feels like a family, it makes a huge difference.”

Laura Woop is another mother who contributes to the team. Laura, mother of senior guard Erin Woop, organizes getting the senior gifts at the end of each year. Laura said that it is easy for her to get the gifts because she works at Tiffany & Co. and can get presents at lower prices. Laura said she loves getting the gifts together because it is easier for the underclassman.

“For these girls, they are so focused on playing basketball that it is one less thing for them to worry about when trying to find something special for the seniors,” Laura said. “It is something that will last forever, and it takes some pressure off the girls.”

The way the families bring the program together has not gone unnoticed by head coach Dan Raymond.

“They are all very supportive of each other and support their daughters in a way that is extremely positive,” Raymond said.

Laura said the parents are close because they love the players and the team as a whole.

“I think that we are so close because everyone has such support for the team,” Laura said. “We are here all of the time, and we are spending so much time together that we have become so close-knit, and we know each other so personally and not just the players on the team.”

Freshman guard Grace Cannon said that having the support is not what she anticipated, but that she loves it.

“I was not expecting the parents to be so close because there have been other teams I’ve played for where it wasn’t like that,” Cannon said. “As a freshman, it is great because you don’t know a lot of people coming in, so having a warm smile after the games that isn’t just from your parents but from other parents as well is really helpful and supporting.”