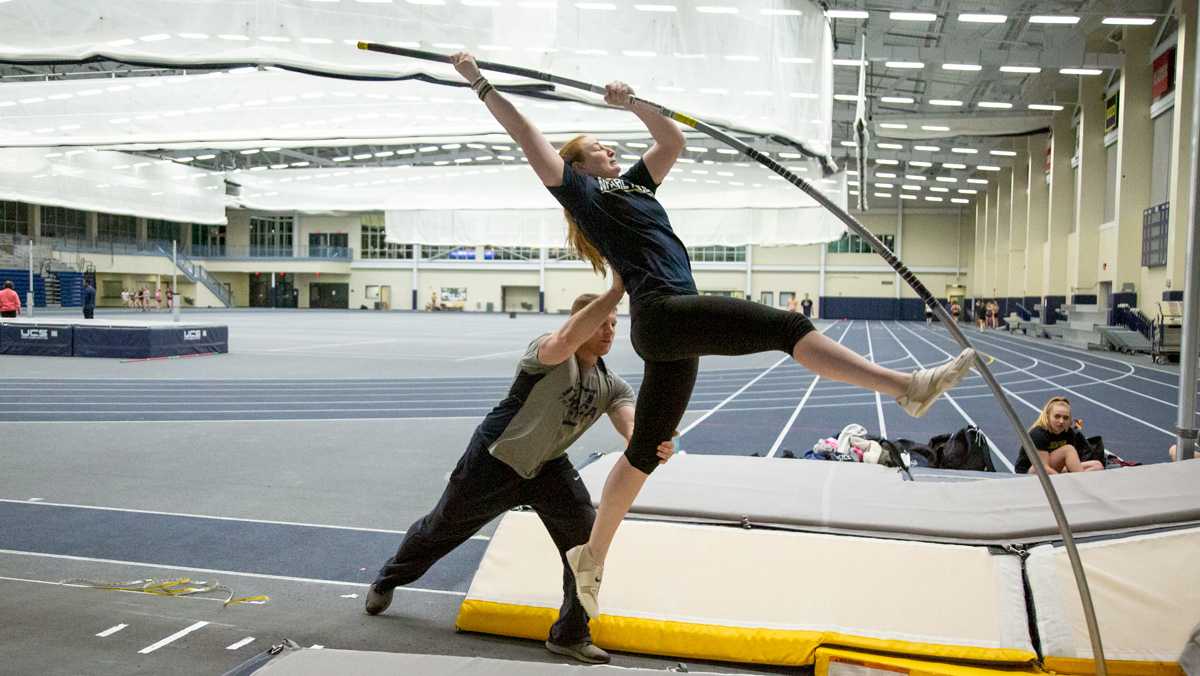 When Ithaca College sophomore Meghan Matheny became the No. 1 pole vaulter in Division III after her performance at the Bomber Invitational on Feb. 1, the first thing she did when she got off the mat was run over and hug her pole vault coach, Matt Scheffler.

Scheffler is currently the pole vault coach for both the men’s and women’s track and field teams at the college. He is also a head track and field coach at Lansing High School, and he runs the Ithaca College Pole Vault Clinic as well as the Tompkins County Pole Vault Club (TCPVC).

TCPVC is an organization that local athletes of any age can join to compete at meets in the offseason and learn more about the sport. Currently, there are three athletes on the college’s roster who attended TCPVC as well as the clinic: sophomores Matheny and Dom Mikula and freshman Kennedey Heichel.

Scheffler said it is an incredible feeling to continue coaching athletes who have previously attended the clinic and TCPVC.

“It’s probably the easiest job because a lot of the athletes when they come here, if they’ve never come to my clinic or been in my club, they have different technical errors that need fixing,” Scheffler said. “With Dom and Meghan, there wasn’t anything I needed to tweak. They came in with the system that I taught, and to have that relationship with them is pretty special.”

TCPVC runs in the summer on Monday and Thursday nights and is attended by 30–40 athletes. Anyone with an interest in pole vaulting can attend club sessions for a baseline fee of $325–350 depending on payment method. The club practices at Lansing High School. During the summer, the club goes to various competitions to practice and compete as well.

The club, which was founded in 2001 when Scheffler was still a college student at The College at Brockport, focuses on not only teaching the sport but making sure the athletes are practicing safely. Scheffler said that during the early 2000s, three athletes died in the United States while pole vaulting, which led people to question the overall safety of the sport. Because of this, Scheffler said he wanted to help the community by sharing his knowledge of the sport and making sure people practice it safely.

Scheffler said that while competing in high school and at The College at Brockport, he did not have a pole vault coach. He said he learned by filming himself with a video recorder his parents bought him, and he would watch his vaults on frame-by-frame playback. He would compare his videos to footage of elite pole vaulters and try to match their techniques. He then began using that to help other athletes at Brockport.

Because of his accomplishments as a young adult with no official coach, Scheffler said he wants to spread as much knowledge about the sport as he can. He said he tries to be flexible when coaching because every athlete is different.

“There’s not one thing that works for everyone,” Scheffler said. “You have a technical model that you teach, but I think you have a different style for each person and you have to tailor to that. If you have someone vaulting that’s 5-foot-3, things don’t work the same way with someone who is 5-foot-9, and I think you have to be adaptable. If you get stuck in one way as a coach, you could be selling your athletes short.”

Scheffler joined the coaching staff at Ithaca College five years after starting TCPVC. He said that as another way to share his knowledge of the sport, he started the pole vault clinic as well. The clinic, which runs on Monday nights from November to March, focuses more on the developmental aspects of pole vaulting for high schoolers.

NCAA colleges competing in Division III sports are not allowed to recruit athletes like Division I colleges can, but Scheffler said the clinic allows interested high schoolers to see the campus while also learning more about pole vaulting.

“It’s a way to continue having high school kids around and jumping and teaching them safety and awareness,” Scheffler said. “There is recruiting potential because kids come here, they see the facility, they work with me and they realize this is a great place to be.”

Heichel, who attended the clinic and TCPVC in high school, said Scheffler was a big factor in her decision to attend the college.

“If he hadn’t been here, I don’t know if I would have leaned as strong towards Ithaca,” Heichel said. “[High school athletes] know that if they train with Scheffler, they’ll be better, and I think that is drawing people here and towards the track team. Now there’s more of us on the pole vaulting squad, which I think attests to him.”

The track and field programs have had immense success with pole vaulters in recent years. Scheffler said two vaulters who were instrumental to the program were Andrew Brown ’10 and Alex Rechen ’16. Rechen was Scheffler’s first All-American as she finished in sixth place at the 2015 NCAA Indoor Track and Field Championships.

In recent years, Kat Pitman ’18 won three national championships and five All-American honors during her career. In 2018, Scheffler was named the National Pole Vault Summit’s Collegiate Coach of the Year. He has also been named the U.S Track & Field and Cross Country Coaches Association Atlantic Region Coach of the Year in both the 2016 and 2017 seasons.

Jennifer Potter, head coach of the women’s track and field team, said Scheffler’s familiarity with the sport helps him to be successful.

“He is very knowledgeable about the event, but it’s not just his knowledge, it’s also his delivery,” Potter said. “I love to watch Matt coach because I feel the way he coaches athletes is unique in the sense that he can relate and react to different things that may occur. I think he can explain things and give constructive criticism in a way that’s very effective, and I think that makes him pretty special.”

Matheny was an NCAA indoor qualifier and attended Lansing High School. She said Scheffler’s ability to coach athletes regardless of their pole vaulting experience is also a reason that the program is gaining recognition.

“I think other kids see the success that Scheffler has had with athletes like Kat and Dom and I… the program is growing,” Matheny said. “We have so many kids on the team that never touched a pole in high school and didn’t start until college, so I think a lot of that comes from seeing the success of other athletes that train with him, and that’s really cool.”

Scheffler said he is happy when the clinic or TCPVC impacts athletes’ decisions to compete for the Bombers.

“With the club, if we get anyone that comes here as a result, that’s a great benefit,” Scheffler said. “I have a passion for the sport, and I want kids to have the same success or even more success than I’ve had with it. I want to provide an avenue for them to succeed.”