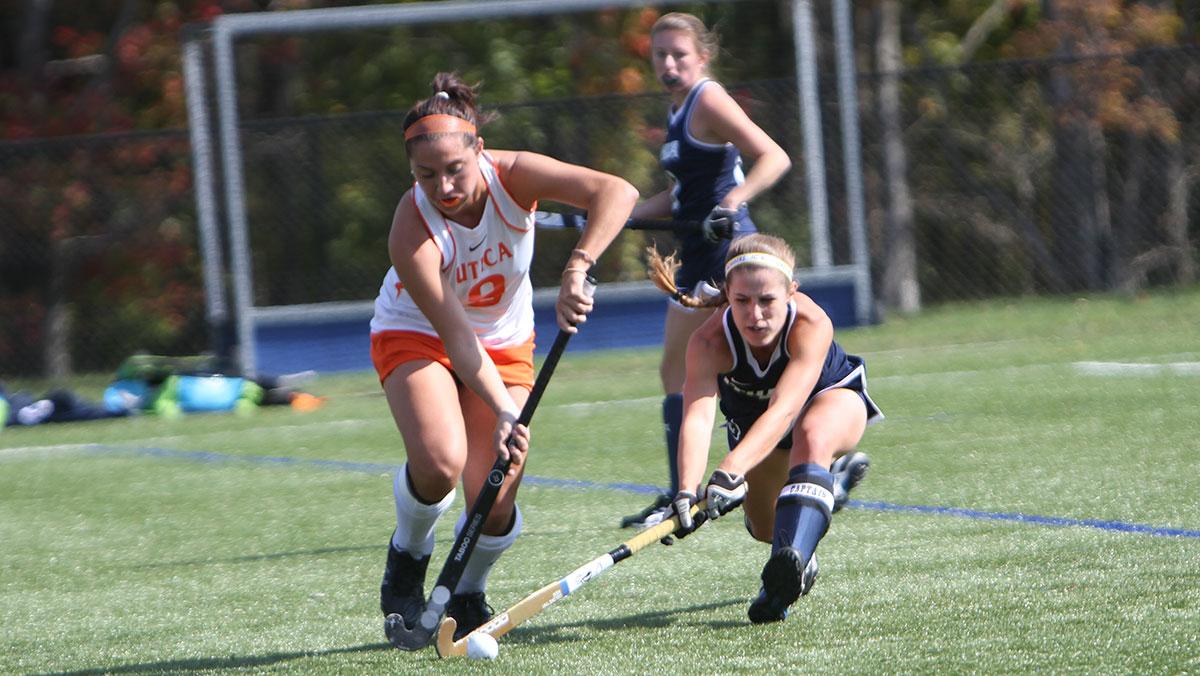 The football team lost its first game of the season 38–27 to the Buffalo State Bengals on Oct. 11 at Butterfield Stadium.

The Bombers committed five turnovers and had no answer for the Bengals in the second quarter. The Bengals scored 31 unanswered points in less than 20 minutes.

“Before we can take care of an opponent, we have to make sure we don’t beat ourselves and that’s what happened this week,” Dempsey said.

Similar lapses in judgment resulted in an embarrassing 38–37 double-overtime loss to Frostburg State University on Oct. 18.

In their next game, the Bombers (4–2, 3–2) will host Salisbury University (4–2, 3–1) at noon on Oct. 25 at Butterfield Stadium. If the Blue and Gold lose, they will be eliminated from NCAA Tournament contention.

In its first of two Empire 8 games, the men’s soccer team defeated Utica College 1–0 on Oct. 11 in Utica, New York. The Blue and Gold outshot the Pioneers 18–13.

Sophomore forward Sean Forward scored the lone goal of the match in the 27th minute when he converted a penalty. The defense had a strong performance as well, earning its first shutout of the season with senior goalkeeper Jordan Gentile stopping seven shots.

Then, on Oct. 18, the Bombers defeated St. John Fisher College 1–0 in overtime in Rochester, New York. The lone goal came in overtime in the 104th minute as senior forward and back Casey Williamson scored his fourth goal of the season off an assist from junior back Joseph Dobbins.

The win pushed the Blue and Gold’ s record in the Empire 8 to 4–1–0. The South Hill squad will return to Carp Wood Field on Oct. 25 to face Houghton College.

The women’s soccer team took an 8–2 record into a four-game stretch from Oct. 11–21 and pulled out four decisive wins.

In the Oct. 11 matchup with Utica College in Utica, New York, junior forward Kelsey King continued her season-long tear with a two-goal performance to lead the Blue and Gold past the Pioneers by a score of 4–0.

The following day, the team hosted Nazareth College at Carp Wood Field. In overtime, junior forward Sarah Woychick received a pass from King and slotted it home to lift the Bombers to a 2–1 win.

In the Oct. 18 contest with St. John Fisher in Rochester, New York, the South Hill squad continued its winning ways on the road with a 2–0 victory.

The final game in the 10-day span saw the Bombers beat SUNY Oneonta 3–0 on Oct. 21 at Carp Wood Field.

The team’s record stands at 12–2 on the season and will host Hartwick College on Oct. 25.

The golf team capped off the fall season with its third first-place finish of the season at the Wittenberg Pat Clouse Invitational Oct. 11–12, shooting a two-round total score of 633.

Sophomore Kimberley Wong earned her first career tournament championship with an overall score of 151, a career-best.

Senior Sharon Li finished with a 155 and tied for third place while senior Kelsey Baker scored a 160 and tied for seventh.

Baker said the team has a ton of confidence heading into the spring season.

“I hope we can use this momentum to work hard out of season … and continue where we left off in spring to earn a spot at the NCAA Championship tournament again,” she said.

The South Hill squad’s spring season tees off at the Vassar College Invitational on Apr. 11.

The men’s cross-country team traveled to Hamilton College on Oct. 11 and won the Hamilton Invitational. The Bombers boasted four top-10 runners out of 177 competitors. Junior Sawyer Hitchcock finished fourth overall with a time of 26:06.6.

The team will next race at the New York State Collegiate Track Conference Championship at St. John Fisher College on Oct. 25.

”We beat three big teams from our region and got some great inter-region competition,” Wright said.

Juniors Anna Fay and Michaela Ciofreddi both set personal records at the meet.

The team next races at the Cornell Reif Memorial Run on Oct. 24.

The field hockey team dropped three conference games. In the Bombers’ first match against Utica College on Oct. 11 at Higgins Stadium, the Blue and Gold fell 3–2. Senior forward Danielle Coiro and sophomore midfielder Colleen Keegan-Twombly scored for the Bombers in the first half, but the team was unable to stop the Pioneers, who outshot the Bombers 24–8.

The team next recorded a 3–2 loss to Stevens Institute of Technology. Keegan-Twombly and junior forward Taylor O’Neil each scored, but the Ducks scored three goals to drop the Blue and Gold to 5–8 overall.

The South Hill squad looks to bounce back when it travels to Brockport, New York, on Oct. 25 to face SUNY Brockport.

The volleyball team continued to impress the past two weekends, as the 20–6 Bombers are now in first place in the Empire 8.

The Bombers began their run at home on Oct. 10 by beating Wells College in four sets. After losing in straight sets to the Carnegie Mellon Tartans, the Bombers bounced back on Oct. 11 by winning back-to-back matches against Utica College and King’s College.

Sophomore middle and right side Siobhan Sorensen said despite a tough stretch of games, the team is still focused.

“I think we have been doing so well that we feel every time we go out there we feel we can win,” she said.

After a disappointing performance in the New York State Tournament in which no player made it past the second round, the women’s tennis team entered the Empire 8 Women’s Tennis Championships as the No. 2 seed. In the semifinal against third-seeded Elmira College, the Bombers won 6–2.

In the final against the top seed, Stevens Institute of Technology, the Bombers redeemed their regular season loss to the Ducks with a 5–3 win, clinching the Empire 8 title. The team won four singles and one doubles match en route to their 10th straight Empire 8 championship. The win qualifies the Bombers for the NCAA Division III Women’s Tennis Championships in May.

The Bombers begin their non-conference play on Feb. 21 against the University of Rochester.

In the morning, Bomber seniors Jennie Peterson and Delaney Pfohl finished first in the double event with a time of 19:15.8. The Blue and Gold’s other entry of sophomore Rachel Dowd and junior Katie Ely finished sixth. In the morning quad event, seniors Alexandria O’Neill, Kellie Palladino, Rachel Brogle and sophomore Tara Malone finished second. In the single, junior Emily Morley finished seventh of 19 entries, completing the course in 21:10.

​The team’s next race is the Head of the Fish on Oct. 25 in Saratoga Springs, New York.