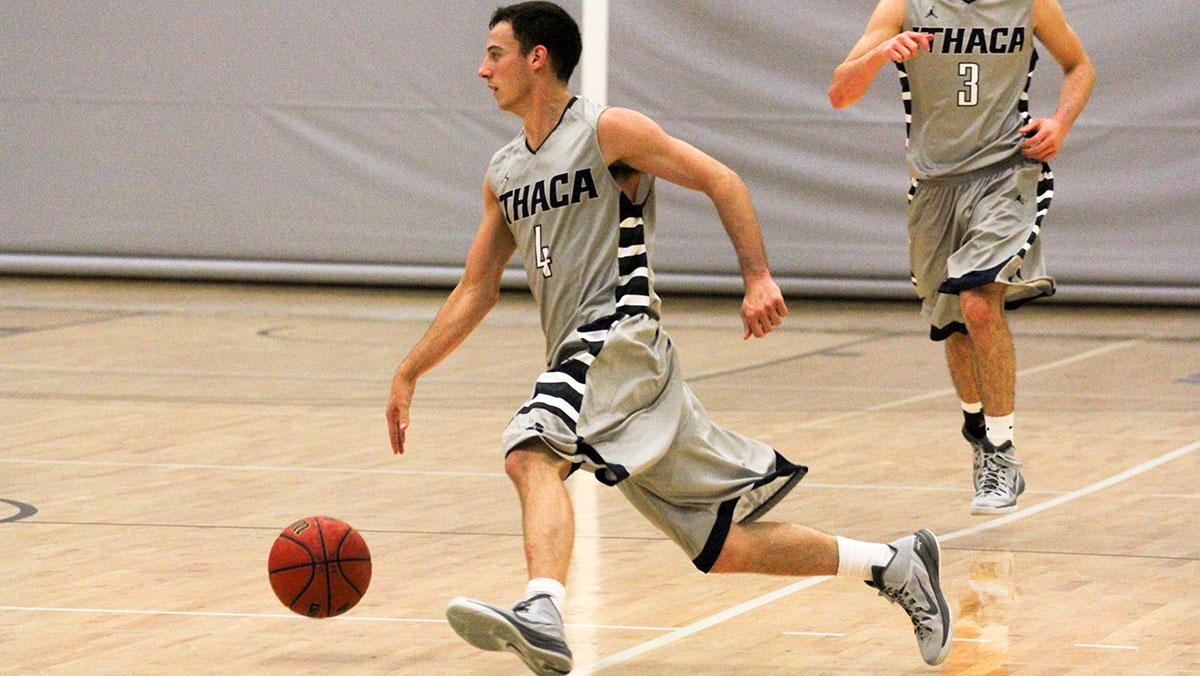 Caitie Ihrig/The Ithacan
Senior guard Max Mascucci pushes the ball down the court in the men’s basketball team’s matchup against the Bantans on Nov. 21. The Blue and Gold are 1–4 to begin the season.
By Ithacan Staff — The Ithacan
Published: December 3, 2014

The wrestling team finished 10th of 20 teams at the New York State Collegiate Wrestling Championships on Nov. 23 at Cornell University.

In the A side, the Bombers finished 10th, and in the B side, they finished eighth of 31 teams.

The Blue and Gold standouts included sophomore Jimmy Kaishian, junior Eamonn Gaffney and freshman Nick Velez, who all finished in the top five of their respective weight classes in the A side bracket.

Velez placed fifth in the 165-pound weight class. He finished with a decision win, a tech fall and a first period pin before falling in two straight matches.

The Bombers will look to continue their winning ways at the Spartan Invitational at York College on Dec. 6 in York, Pennsylvania.

For the second time in two weeks, the football team lost in the final minute of the game after failing to score a touchdown in the second half, losing to Hobart College 22–15 in the first round of the NCAA Tournament on Nov. 22 in Geneva, New York.

The Statesmen outgained the Bombers 156 to minus 15 in the fourth quarter and sealed the South Hill squad’s elimination with a 1-yard touchdown run with 13 seconds remaining. The Bombers scored on all four of their trips to the red zone but only scored one touchdown as senior kicker Garrett Nicholson set a career-high with three field goals. Senior quarterback Tom Dempsey finished the day completing only 16 of 31 passes for 178 yards. Dempsey noted the offense’s poor execution.

“We were able to move the ball OK, but we really struggled to get the ball into the end zone,” Dempsey said. “They brought a lot of pressure and more guys than we could block. At that point, it’s my job to find an open receiver and get the ball out of my hands and into their hands.”

The Bombers’ season is over, finishing the year 7–4 overall and 6–2 in Empire 8 conference play.

The women’s basketball team now stands at 4–1 on the season after completing four games  of its six-game road trip.

The Bombers began the trip with a 80–40 win over John Jay College on Nov. 21 at the Messiah Tip-Off Classic in Grantham, Pennsylvania. The Blue and Gold would then go on to defeat host Messiah College 53–50 in the final to win the tournament on Nov. 22.

On Nov. 30, the South Hill squad suffered its first loss of the season at John Carroll University by a final score of 65–51.

Finally, on Dec. 2, the Bombers travelled to Cortland to face off against SUNY Cortland. They went on to win 64–61 over the Red Dragons.

Sophomore guard Ali Ricchiuti said she is proud of the team’s performance so far.

“I feel like we’ve really shown that we’re a team that’s not going to give up and play until the end, despite what the score is,” she said.

The South Hill squad will return to action on Dec. 6 to take on St. Lawrence University in Canton, New York.

The men’s basketball team went into a three-game stretch from Nov. 21 to Dec. 2 and pulled out mixed results.

In the first game of the set, the Bombers were bested by Trinity College 74–48 at Ben Light Gymnasium.

Nov. 22 saw the Bombers pick up their first win of the season, 78–62 over Farmingdale State College in Cortland, New York. Senior guard Max Masucci led the way for the Blue and Gold with 23 points off the bench.

On Dec. 2, the Bombers again traveled to Cortland to take on SUNY Cortland. The Red Dragons exploded out of the gate, scoring  50 first half points en route to a 91–73 win.

Despite the weak beginning to the season, Masucci said the squad can turn it around.

“We just have to trust in our offensive and defensive strategies and execute on both ends of the floor,” he said. “We will turn it around by continuing to improve each and every day in practice and maintain mental strength.”

The Bombers will look to bounce back on Dec. 5 against St. Lawrence University.

The men’s and women’s swimming and diving teams traveled to Hamilton College on Nov. 22 and came away with a record of 5–1 overall. The men’s team defeated Hamilton College, Hartwick College and SUNY Geneseo, while the women’s squad went 2–1, losing to Geneseo 153–147.

Individually, junior Adam Zelehowsky came out with wins in the 100 and 200-yard freestyle. Senior Lucas Zelehowsky also earned a first-place finish in the 100-yard breaststroke.

For the women’s team, sophomore Grace Ayer placed first in the 100-yard backstroke, 200-yard breaststroke and the 200-yard individual medley.

Overall, the men’s squad record stands at 7–0, while the women’s team is 7–1 overall. The Blue and Gold will return to action on Dec. 6 for the Bomber Invitational at the Athletics and Events Center Aquatics Pavilion.

The women’s cross-country team and individual junior Sawyer Hitchcock represented the Bombers in the NCAA Division III Championship on Nov. 22 in Mason, Ohio.

Hitchcock was the only member of the Blue and Gold’s men’s team to earn an invitation to the meet. He finished the season placing 111th out of 280 national competitors, completing the 8K race at a time of 25:26.4.

The women’s team placed 31st overall at the championships. Out of the 275 competitors, senior Emily Smith led the Bombers, finishing 155th in the 6K at 23:37.7. Senior Hannah Wright and graduate student Allison Bartkowiak crossed the finish line shortly after coming in 167th and 170th, respectively.

Wright said she owes this fantastic season to the great coaching staff and hard working athletes.

“I have to thank all of my teammates for being there for one another and for giving it their all this season: It paid off,” Wright said.

The championship race concludes both the men’s and women’s cross-country seasons.