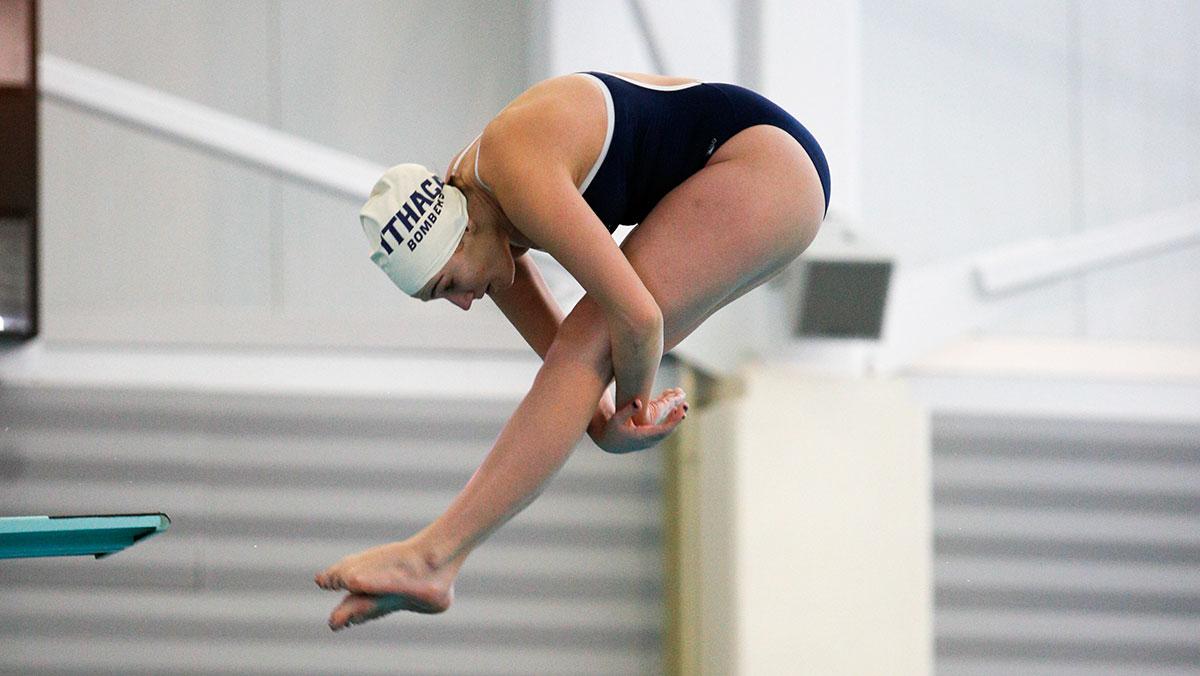 Yana Mazurkevich/The Ithacan
Sophomore Brianna Schontz executes a dive in the Dick Comanzo Diving Invitational Jan. 25 in the Athletics and Events Center. She placed sixth with a final score of 423.00 in the 3-meter dive.
By Ithacan Staff — The Ithacan
Published: January 28, 2015

The gymnastics team lost by fewer than one point against Springfield College on Jan. 25.

The Blue and Gold once again did best on the balance beam. Freshman Maggie Nieto finished first on beam with a 9.525. Second place on beam went to junior Megan Harrington with a score of 9.475. Closely behind Harrington was freshman Kendra Balcerak with a third-place score of 9.45.

On vault, Cohen had the top score on the South Hill squad with a score of 9.425. She took fourth in the event.

Harrington took second place in all-around with a career-best score of 37.5.

The Bombers return home for their next meet at 1 p.m. Feb. 1 against SUNY Brockport at Ben Light Gymnasium.

The women’s basketball team split a weekend pair of Empire 8 matchups, first beating Alfred University at home Jan. 23 then receiving its first conference loss of the season at the hands of St. John Fisher College on Jan. 24.

The Bombers began the weekend in blowout fashion, defeating the Saxons 82–43 behind 13 points from sophomore guard Ali Ricchiuti and a career-high 10 from freshman guard Allison Spaschak. Senior forward Francesca Cotrupe paced the Blue and Gold on the glass with 11 boards, eight of those coming on the offensive end.

After the rout of Alfred, the team traveled to St. John Fisher for the Saturday game of the weekend series. Despite beating the Cardinals earlier in the year, the Bombers could not
complete the conference-sweep of one of their biggest league rivals, losing the match 54–49.

Ricchiuti again led the South Hill squad with a team-high 12 points, but the Bombers could not match the Fisher combination of senior guard Portia Velasco and junior guard Mary Kate Cusack, who poured in 18 and 17 points, respectively.

The Blue and Gold will look to get back to their winning ways when they host Utica College on Jan. 30 at Ben Light Gymnasium. 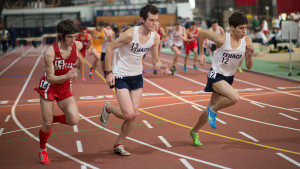 The men’s and women’s track and field teams competed at the Cornell Upstate Challenge on Jan. 24 at Cornell University.

Freshman Taryn Cordani placed eighth in the mile event with a time of 5:11.53, qualifying for an ECAC time by six seconds. Senior Leigh Martino led the Bombers and placed 10th in the 500-meter run, finishing the race in 1:20.48. Martino also hit the ECAC qualifying mark. Freshman Sierra Grazio also earned a personal best in the 500-meter.

Senior Eliza Dewart met the ECAC standard in the 200-meter dash with a time of 26.24 seconds. Junior Alex Rechen qualified for ECACs in pole vault and sophomore Brandy Smith earned the ECAC mark in the weight throw event.

Freshman Seth Abbott and sophomore Tyler Denn-Thiele earned personal best finishes in the heptathlon event after finishing in fifth and sixth, respectively. In the mile event, sophomore Sean Phillips finished at a time of 4:26.77 placing 13th overall to earn his personal best.

Both teams are set to compete again next Jan. 31 at home for the Bomber Invitational in the Athletics and Events Center.

With only two meets left for the men’s and women’s swimming teams before the postseason begins, the Bombers have successfully carried a near-spotless record throughout the 2014–15 season. Last weekend, the now 14–0 men and 15–1 women locked in another victory against Alfred University.

The women totaled nine first place finishes in individual events. Freshman Nilza Costa had a strong outing, finishing first in two events. Sophomore diver Nickie Griesemer swept the competition by finishing first in both the 1-meter and 3-meter dive. Griesemer’s scores of 282.20 in the 1-meter and 316.00 in the 3-meter dives earned her two pool records.

On the men’s side, the Blue and Gold earned first-place finishes in 12 of their 16 events. Three swimmers, seniors Clement Towner and Lucas Zelehowsky and freshman Aidan Hartswick, finished first twice in their respective individual events.

The men’s lone diver, senior Matt Morrison, also earned first-place finishes on both boards, and his scores of 374.20 in the 1-meter and 376.50 3-meter dives set pool records as well.

Senior Lyndsay Isaksen said she is hoping their regular season success will have a positive impact on the team’s attitude heading into the final weeks before the postseason.

“I definitely think our success from the season will carry over because we know this is what we’ve been working for,” she said. “We definitely want to repeat winning our state title, which is going to be a challenge because we will be going up against some great teams.”

On Jan. 25, the men’s and women’s diving teams competed in the Dick Comanzo Diving Invitational. Morrison highlighted the meet with a sweep of both diving events on his way to earning Empire 8 Athlete of the Week.

Up next for the Bombers is a dual meet at Union College on Jan. 31.

The men’s basketball team was riding a hot streak into a pair of games Jan. 23 and Jan. 24. The team had won five of its last six games and was on a four-game win streak heading into its Friday night matchup with Alfred University.

The Bombers held a four-point advantage heading into the half, but were able to pull away in the second half, winning the game 92–79.

At the time, the squad’s five-game winning streak marked the longest since winning five-straight games at the end of the 2012–13 season.

The Jan. 24 matchup saw the Bombers run into a hot St. John Fisher College squad that was 14–2 heading into the contest. Fisher senior guard Stefan Bock led the way for the Cardinals with 24 points, while senior guard Adam Ambielli and sophomore forward Keegan Ryan chipped in with 17 points apiece. Freshman guard Carroll Rich lead the Bombers offense with 14 points in the 96–70 loss.

Despite the most recent setback, Masucci said the Bombers have been playing significantly better basketball than they were at the beginning of the season.

“We have been pushing the ball much more and playing very unselfish on offense,” Masucci said. “We have also been playing better team defense and executing our game plan.”

The 8–9 Bombers play next Jan. 30 when Utica College travels to the South Hill.