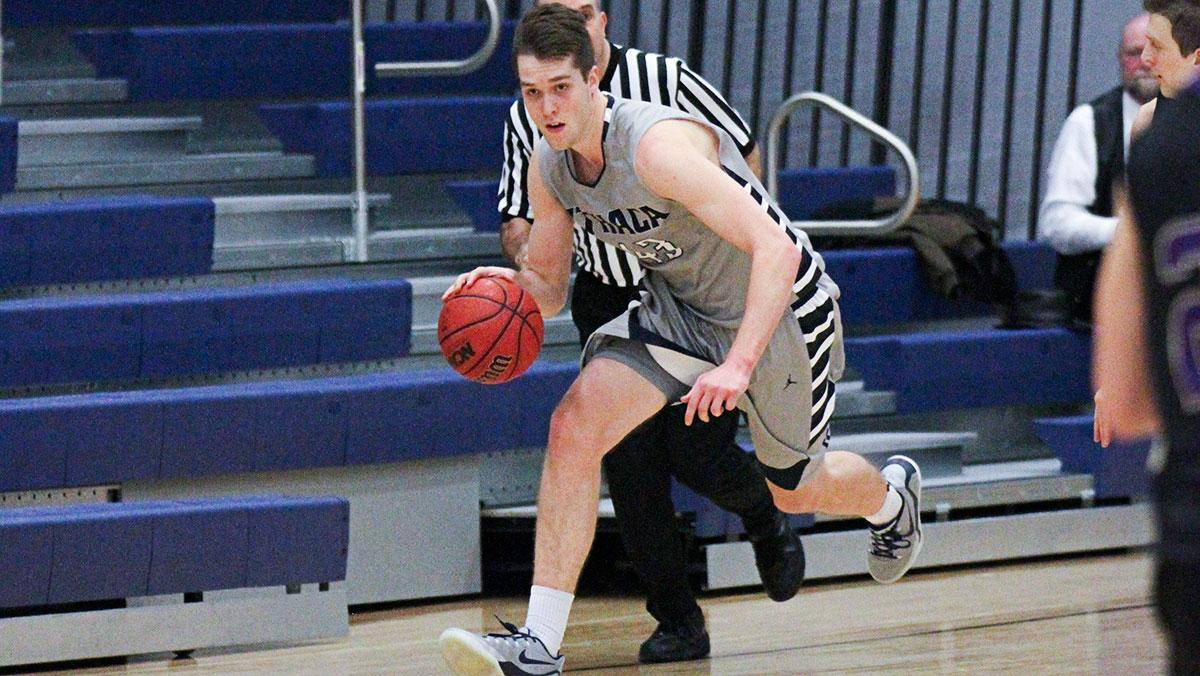 Caitie Ihrig/The Ithacan
Senior center Keefe Gitto dribbles the ball down the court during the men's basketball game Jan. 20 against Houghton College. The Blue and Gold won the game 89-74.
By Ithacan Staff — The Ithacan
Published: January 21, 2015

Over winter break, the wrestling team traveled to Fort Wayne, Indiana, for the National Wrestling Coaches Association Division III National Duals Jan. 9. Seventeen of the 24 teams in the tournament were nationally ranked.

The Blue and Gold started the Duals with a win over Wheaton College, racking up 18 consecutive points to start off the match. Pins by senior Alex Gomez and sophomore Nick Wahba accompanied decision wins by sophomore Jimmy Kaishian and junior Eamonn Gaffney. Wheaton was only able to win three matches, leading to a final score of 28–9.

Following a 21–12 loss to eighth ranked Coe College, the Bombers dominated in the consolation bracket with a 32–6 rout of Washington & Jefferson College. The team won eight of 10 matches, highlighted by a major decision from Kaishian and a pin by Gomez to begin the match.

The Bombers next faced 23rd-ranked Olivet College. Again the Bombers began strong as Kaishian, Gomez and Wahba won their matches to put the team up 11–0 early. At 174 pounds, junior Zach Conner pinned his opponent after a reversal in the first period.

The team then faced sixth-ranked University of Wisconsin La-Crosse for its final match of the day, ultimately falling 20–12.

After returning to New York, the Bombers traveled to the Empire Collegiate Wrestling Conference  in Oneonta, New York, on Jan. 17. The team came out on top of eight teams and crowned six individual champions. Sophomore Carlos Toribio prevailed in his first start of the season.

The 6–2 South Hill squad next travels to Centenary College Jan. 30.

In its first meet of the season, the gymnastics team fell in a close contest to Ursinus College in Collegetown, Pennsylvania.

Freshman Rachel Lee received the most points for the Bombers with a score of 9.700 on the beam, finishing in first place. The South Hill squad won the beam by one-tenth of a point, giving the team its only event victory. Freshman Kendall Balcerak finished fourth on the beam.

Senior Valerie Cohen scored the second highest number of points for Ithaca with a score of 9.525 on the floor.

Cohen said the young team set a standard on which to improve throughout the season.

“We definitely have room to improve, but for the first meet and given the youth of our team it was a great place to start,” Cohen said. “We always aim to steadily improve as the season progresses and I think we are on the right track.”

The Bombers will compete next Jan. 25 at Springfield College in Springfield, Massachusetts.

The men’s and women’s swimming and diving teams swept both of their contests last week.

The women’s team competed at home against the University of Rochester Jan. 12 in addition to Rensselaer Polytechnic Institute’s Kumpf Invitational Jan. 17. The team squeaked past Rochester 151–149 and finished first out of seven teams at the RPI Invitational.

Despite the wins, Zelehowsky said the team had just come out of a grueling winter training regime and was exhausted.

“Everyone was so broken down we didn’t know what to expect going into the meet but we all came through,” he said.

On the women’s side, sophomore Nickie Griesemer swept the diving events against Rochester while breaking her own pool and school record for the three-meter board with her score of 303.90.

Sophomore Grace Ayer led the way for the Bombers at the RPI Invitational with her three first-place finishes.

Both teams are back in action against Alfred University Jan. 24.

Sophomore Brandy Smith had the only first-place finish for the Bombers by taking the top spot in the weight throw. Smith captured first with a throw of 14.97 meters.

Both freshman Sophia Feuer and junior Eliza Dewart met qualifying standards in the 400-meter.  Feuer finished with a time of 59.85 seconds and Dewart clocked in 0.15 seconds later with a time of 1:00.00.

The men’s team had one ECAC qualification when junior Andrew Brandt cleared 1.94 meters in the high jump.  Brandt tied with five other jumpers who were all from either Division I or II schools.

On Jan. 17 select members of the women’s team competed in the RIT Tiger Invitational against 13 other schools.

Sophomore Paige Agnew placed sixth in the 60 meter hurdles with a time of 10.40 seconds, the best individual finish of the day for the Bombers.

Both the men and women will continue to look for more ECAC qualifications Jan. 24 at the Cornell Upstate Challenge.

The men’s basketball team went into an eight-game stretch from Dec. 30 to Jan. 20 looking to lay the foundation for a strong final month of the season, and it pulled out five quality wins during the academic winter break.

The team dropped the first two games of the series, however. On Dec. 30, the Bombers were beaten by Hamilton College 76–54, and by Elmira College 75–60 in the Jan. 2 game.

The next day the Blue and Gold picked up their first win of the New Year, topping Utica College 97–90. After falling to St. John Fisher College 92–61 on Jan. 6, the team hit its stride.

On Jan. 13, the Bombers upset the 24th-ranked University of Scranton 88–80 in overtime. The win was especially important for the Bombers, as it was their first win of the season against a nationally ranked team. Senior center Keefe Gitto led the way for the Blue and Gold with a double-double, posting 25 points to go along with his 11 rebounds.

The Jan. 16 matchup saw the South Hill squad edge out Stevens Institute of Technology by one point, 71–70.

On Jan. 17, the Bombers kept the ball rolling with a close 96–91 victory over the Hartwick College Hawks.

The Blue and Gold rounded out their eight-game stretch with an 89–74 victory over the Houghton College Highlanders on Jan. 20.

The 7–8 Bombers will put their four-game win streak on the line when the 10–5 Alfred University Saxons visit Ben Light Gymnasium on Jan 23.

The Bombers have started off the month with a bang by winning their first six games of conference play.

The team ended December with a trip to San Juan, Puerto Rico, for the San Juan Shootout. The change of scenery did not prove beneficial for the Blue and Gold as they lost 76–66 to SUNY Plattsburgh and 59–42 to Cabrini College.

However, the Bombers bounced back upon returning to the South Hill Jan. 2 to begin conference play with a 76–68 win over Elmira College. The team had its second conference win the next day when it traveled to Utica, New York, to defeat Utica College 80–74 in double overtime. The Bombers then went on to pull off a 79–69 win over St. John Fisher College at Ben Light Gymnasium.

In their next series of weekend games, the Bombers went on the road to defeat Stevens Institute of Technology 75–68 in Hoboken, New Jersey, and Hartwick College 62–55 in Oneonta, New York.

The team returned to Ithaca Jan. 20 to take on Houghton College. The Blue and Gold defeated the Highlanders 69–29, bringing their season record to 12–3 and 6–0 in conference play. Despite its six-game streak, head coach Dan Raymond said the team’s real ambition is to keep improving.

“Getting better, that’s really our focus, it’s not to win games, our goal is just to get better every day,” he said.

The Bombers return to action and will look to stay undefeated in the conference Jan. 23 against Alfred University at home.