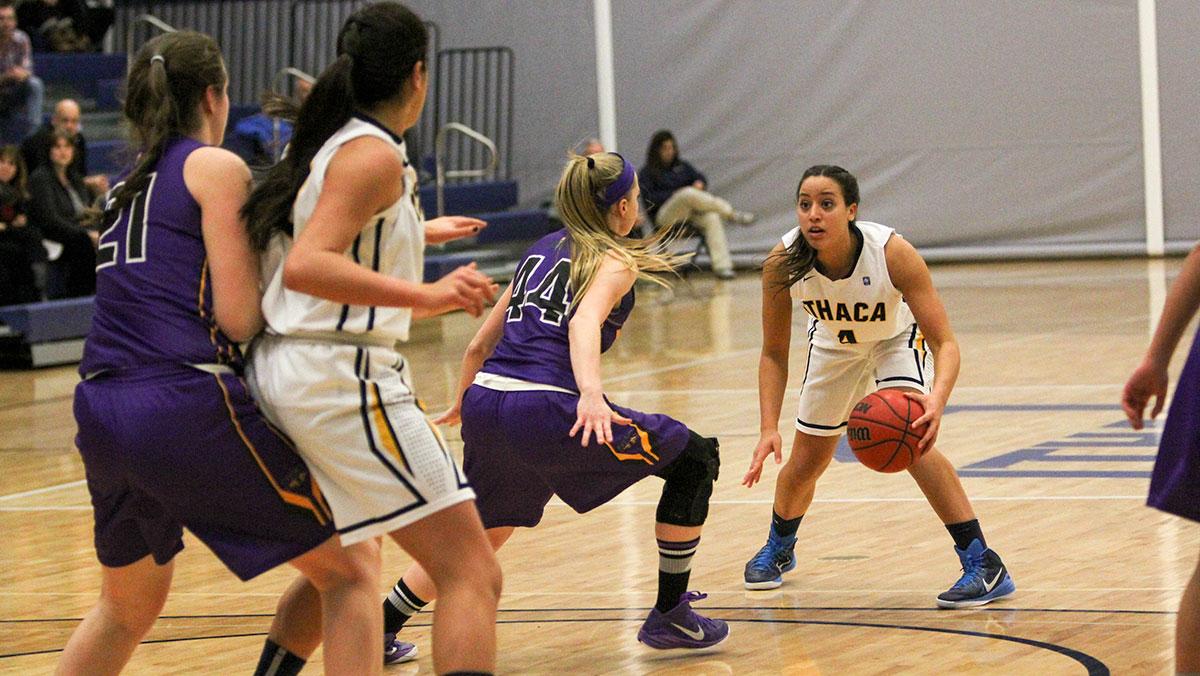 The wrestling squad traveled to Roger Williams University for the NCAA New York Regional Tournament on Feb. 28 and March 1.

As a team, the Bombers took the top spot at the tournament with a score of 128.5.

The Blue and Gold competed in the Brockport Invitational on March 1 against host SUNY Brockport, Rhode Island College and SUNY Cortland.

The Bombers ended with a team score of 187.050, finishing third overall. The squad scored its highest team score on beam in the program’s history with a 47.500. Freshman Hannah Donnelly placed first on beam with a score of 9.750. She said despite a tough start, the team has shown improvement recently.

“We are gaining momentum at the right time,” Donnelly said.

Junior Megan Harrington scored a 36.600 as the only Bomber competing in all around, taking first in the event. The South Hill squad also had a season-high team score on floor with a 46.775.

The Bombers will compete in their last regular season meet against the Red Dragons at 3:30 p.m. on March 7 in Cortland, New York.

In its first home match of the year, the men’s tennis team defeated the St. Lawrence University Saints 6–3 on Feb. 28, marking the first time the Bombers have won against the Saints in three years.

“We all showed a lot of energy throughout the match, and that definitely propelled us to our win,” he said. “All of the training we did in the offseason helped us wear down our opponents as well.”

The Blue and Gold will next play Houghton College on March 21 at the Reis Tennis Center at Cornell University.

The men’s lacrosse team fell to No. 1–ranked Rochester Institute of Technology on Feb. 28. The No. 13 Bombers put up a strong outing against the Tigers despite losing 12–9. The team rallied in the fourth quarter to bring the score to 9–8 in RIT’s favor, but the Tigers scored two straight goals late in the game to seal the victory.

“I was really proud of the discipline we showed,” Goldbrecht said. “Our whole team battled really hard, and it was good to see that we could come back from a deficit.”

The men’s and women’s diving teams sent six divers to compete in the NCAA Division III Diving Regionals on Feb. 27 and 28 in Geneseo, New York.

The Bomber’s lone male diver Matt Morrison finished second overall in the 1-meter board before taking the top spot in the 3-meter board.

With their strong performances over the weekend, Morrison, Griesemer and Belson punched their tickets to the NCAA National Championships, where they will join both swimming teams on March 18–21 in Shenandoah, Texas.

The Bombers saw their season end Feb. 27 at the hands of St. John Fisher College in the Empire 8 tournament semifinal game.

The South Hill squad came into the contest with a 12–13 record after turning its season around to claim the No. 4 seed in the conference.

The Blue and Gold found themselves down by only four points at halftime and were looking to upset their top-seeded opponent, but Fisher scored 51 points in the second frame en route to a 90–75 victory.

Reflecting back on the season, Gitto said the characteristic that best described this year’s squad was resiliency.

“No matter what, we never gave up on each other, and that’s why we were able to turn it around and make the Empire 8 tournament,” he said.

The Bombers finished the season with a 12–14 record and will be graduating Gitto and fellow senior co-captain Max Masucci this upcoming spring.

The women scored 204.5 points and met Eastern Collegiate Athletic Conference qualifying standards 26 times throughout 15 events. The team was led by second-place finishes from junior Eliza Dewart, senior Christine Benway and sophomore Natalie Meyer as well as a second-place finish in the 3,200-meter relay.

The men’s team scored 110 points to take second place in the state championship and nine athletes hit ECAC qualifying marks. The Bombers were led by first-place finishes by junior Andrew Brandt and the 4×400 meter relay team.

Next up for both teams is the ECAC Indoor Championship on March 6–7.

The women’s lacrosse team opened its season with a 14–8 victory Feb. 28 against the University of Rochester at Higgins Stadium.

The Bombers played an aggressive, yet conservative game by outshooting the Yellowjackets 29–21 while having seven fewer turnovers.

Junior attacker Ally Runyon shined in the game, scoring eight goals out of her 10 shots and adding two assists.

The Bombers, who are currently ranked No. 18 in the country, will play their next game March 7 on the road against York College before heading to Clermont, Florida, to compete over spring break.

The women’s basketball team lost in the final of the Empire 8 Tournament 86–84 against St. John Fisher College on Feb. 28 at home.

First, however, the Blue and Gold dominated Nazareth College in the semifinal game, winning by a score of 72–53.

Nazareth shot just 31.7 percent from the field, showcasing the strength of the squad’s defense.

The teams traded baskets throughout the second half, and the game headed into overtime with the score tied at 79.

Fisher finished on top after a last-second 3-point attempt fell short for the Bombers.

The Blue and Gold earned an at-large bid in the NCAA playoffs and will travel to Bowdoin College on March 6 to face the College of Mount Saint Vincent in the first round of the tournament.