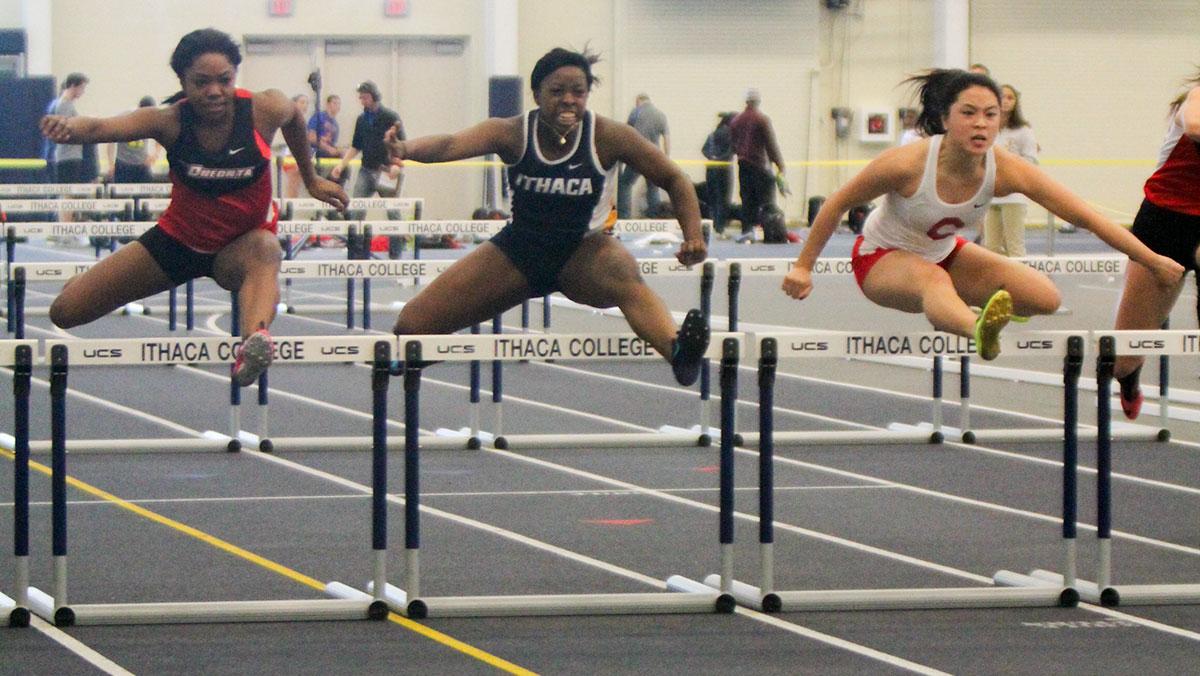 Caitie Ihrig/The Ithacan
Freshman sprinter Amber Edwards leaps in the air during the 60-meter hurdles in the Ithaca Invitational on Feb. 7 in Glazer Arena. Edwards placed third in the event with a time of 9.46.
By Ithacan Sports Staff — The Ithacan
Published: February 11, 2015

The men’s basketball team had a light, but successful week as the Bombers won their only game, beating Houghton College 87–83 and improving to 8–4 in Empire 8 play.

The last-place Highlanders started off the half on a 13–6 run, but the Bombers came back to tie the score at 14. The team then took control of the half, leading 44–25 by the period’s end.

Head coach Jim Mullins said his team has made some great progress in recent weeks and hopes it continues in the season’s final stretch, mostly due to the uncertainty of the conference tournament seeding.

“Spots in the Empire 8 are wide open,” he said. “Minus St. John Fisher, no team is guaranteed.”

The Bombers return to action this weekend with home games against Hartwick College and Stevens Institute of Technology.

The Blue and Gold posted a team score of 183.475, leaving them in fourth place for the tournament. The team had its highest total score on the uneven bar with a 46.125.

Freshman Kelly Nash received a career-high on bars with a score of 9.575, earning her seventh place. The highest score of the entire team came from freshman Rachel Lee on the balance beam with a 9.65. Lee took fourth place.

The wrestling team took to the mats against SUNY Oneonta and prevailed with a commanding 43–3 victory. With the victory, the team pushed its dual match winning streak to three and its overall record to 9–2. The 43-point mark sets a new high for the season, eclipsing the 40-point total accumulated just two matches earlier against Centenary College.

Led by pins from sophomore Nick Wahba and junior Greg DuVall at 141 and 197 lbs., respectively, the South Hill squad rattled off nine consecutive bout victories after dropping the first bout.

The only win for the Red Dragons was produced by nationally ranked heavyweight James Bethel, who won by decision 6–0 in the first bout. After the loss to go down 3–0, sophomore Jimmy Kaishian responded with a major decision, outscoring his opponent 11–3 to right the ship for the Bombers.

Senior Alex Gomez, freshman Jaison White and junior Eamonn Gaffney posted major decisions to help propel the team to the victory. In total, the Bombers wrestled to the tune of four majors, three technical falls and two pins on the day.

The women’s track and field team split up for meets Feb. 7 where it competed at Boston University’s Scarlet and White Invitational and at home for the Ithaca Invitational alongside the Bombers’ men’s team.

Junior Alex Rechen broke the school record in pole vault with a mark of 3.65 meters, placing her fifth in Boston.

At the Bombers home meet, Ithaca posted 18 top-eight finishes in 12 events. In the 4×400-meter relay, the team of freshmen Anissa Ash and Amber Edwards, senior Brittany Greene and sophomore Rose Paskoff placed second, clocking in at a time of 4:24.97.

The women’s basketball team continued its success with a commanding 60–38 win at Houghton College on Feb. 6.

The Bombers shot 45 percent from the field and held the Highlanders to just 29.2 percent shooting in the blowout performance. The South Hill squad took a 32–22 lead into halftime and didn’t look back, extending the lead to over 20 points late in the second half.

Junior guard Keri Steele paced the Bombers with 13 points on 6–7 shooting, while freshman guard Jordan Beers added eight points.  Sophomore guard Alex Gilligan and senior forward Geena Brady each chipped in seven for the Blue and Gold, who improve to 17–4 on the season with four regular-season games remaining.

The Bombers have won four-straight games and are tied with Stevens Institute of Technology for first place in the Empire 8 with a conference record of 11–1.

The South Hill squad’s next game is against Hartwick College at 6 p.m. Feb. 13 at Ben Light Gymnasium. The team is set to play Stevens Institute of Technology at home the next day, which will likely determine the regular-season conference champion.