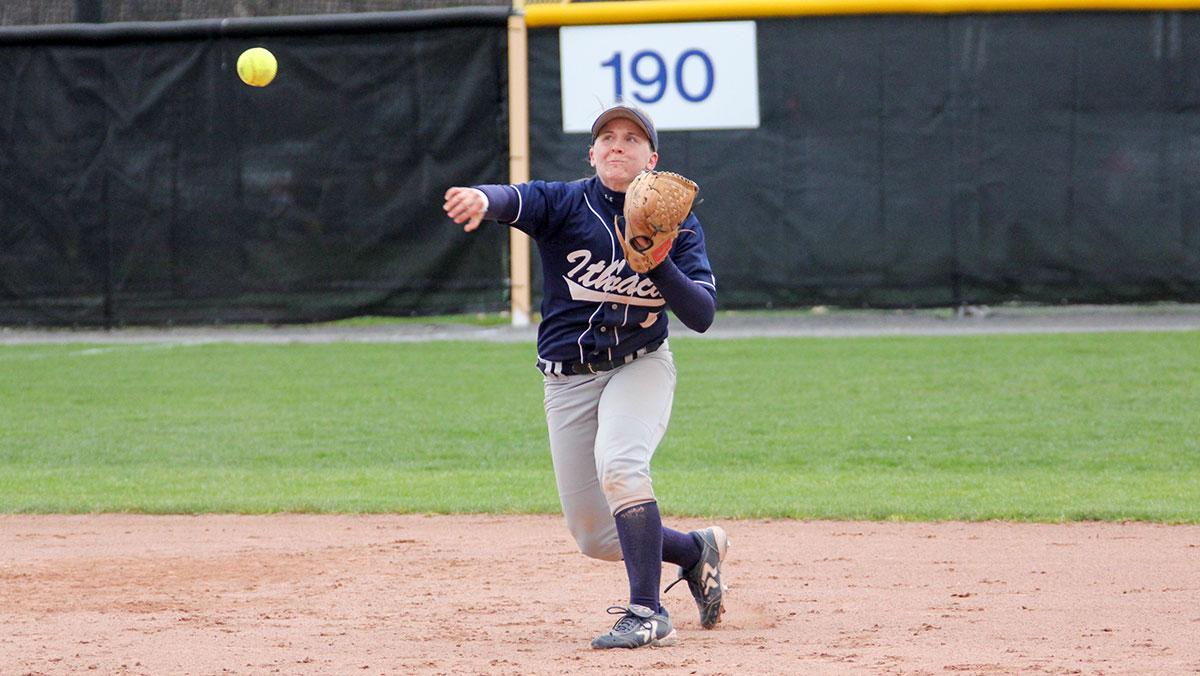 Caitie Ihrig/The Ithacan
Senior captain Francesca Busa throws the ball toward first base to record an out during the softball team’s 4–2 loss to Buffalo State College on April 26 at Kostrinsky Field in game two.
By Ithacan Sports Staff — The Ithacan
Published: April 29, 2015

The Blue and Gold were swept by the Cardinals on April 25 by the scores of 6–3 and 2–0, respectively. Sophomore third baseman Trevor Thompson moved over to shortstop and led the offensive charge going 2-for-4 with two doubles and a run scored in the first matchup.

The Bombers lost the final game of the three-game set by another tight score of 5–2. Senior outfielder Christian Brown went 2-for-3 on Senior Day with a double and a run scored.

The baseball squad halted its three-game losing streak with an 8–4 victory over Elmira on April 27. Junior Ryan Contegni pitched eight strong innings of shutout baseball while striking out seven batters.

On April 28, the team defeated SUNY Oswego by a score of 6–4 with a late rally, after scoring five runs in the top of the ninth inning.

The South Hill squad traveled to play St. Lawrence University at 7 p.m. April 29. Score was not available at press time.

The women’s first varsity boat started off the regatta on a slow start with a second-place finish to Hamilton in the opening heat, losing to the Continentals by 12 seconds. The Blue and Gold bounced back and beat Marist in the petite final by eight seconds with a time of 7:48.3. The second women’s varsity boat earned a spot in the final with its win in the opening heat. However, the Bombers would end up in second place in the final race, losing to Marist by almost five seconds.

The Bombers will prepare next for the New York State Championships on May 2, which will be held in Saratoga Springs, New York.

The men’s lacrosse team finished off its regular season with two big wins over Empire 8 rivals Alfred University and Stevens Institute of Technology on April 22 and 25.

In a 19–9 victory against Alfred, the Blue and Gold held control and kept a consistent lead throughout the game.

Ten different players added goals to take the win, including senior midfielder Steve Danylyshyn, who totaled five goals on the day for the Bombers.

In the game against Stevens, it was a competitive match between the two teams.

Although the Ducks led 5–4 by the end of the first quarter, the Blue and Gold were able to go on a three-goal run and take a 7–6 lead by halftime.

The team rallied back in the fourth quarter, scoring seven consecutive goals to seal a 16–12 win.

Sophomore attacker John Januszkiewicz added five goals and one assist in the game.

The Bombers will play in a rematch against Stevens on their home turf for the semifinal round of the playoffs at 4 p.m. April 29 at Higgins Stadium.

The women’s lacrosse team rounded out its regular season riding a three-game winning streak as it improved its record to 10–7, propelling itself into the playoffs.

Following a 9–8 victory over Hamilton College, the Bombers set their sights on making the playoffs with a win against Utica College on April 22 in Utica, New York. They once again pulled out a one-goal win over the Pioneers to finish the regular season on a high note.

Senior attacker Emily Peters led the way offensively scoring three goals, while juniors attacker Ally Runyon and midfielder Riley Marion, and sophomore midfielder Morgan Cadwell each added a pair of their own. Ahead 6–5 after one half, the Bombers found themselves in an offensive battle with the Pioneers. Utica would tie the game at 9 with three minutes to play courtesy of senior midfielder Megan Kane. With 18 seconds left to play before a possible overtime period, it was Cadwell who scored to push the South Hill squad past the Pioneers.

With the regular season over, the team will begin to prepare for the postseason starting May 2. The Bombers will take on the Nazareth College Golden Flyers in the semifinals of the Empire 8 Championship Tournament in Rochester, New York.

The softball team won three out of the four games it played against Elmira College and Buffalo State College on April 25 and 26.

Against the Elmira Soaring Eagles, junior Laura Quicker pitched a complete game shutout in a 2–0 victory in game one of the doubleheader. Freshman Allie Colleran went 1-for-3 with a home run on the day. Junior Jenna Tambasco also had her first career extra-base hit, adding a run after stealing third and scoring on a passed ball.

In the second game of the doubleheader, junior Allison Macari followed Quicker’s performance with a complete game of her own in the 9–1 blowout win.

Against Buffalo State College, Quicker pitched the Bombers to a 4–3 victory as the game went into 12 innings. Colleran singled in a run in the bottom of the 12th to secure the victory for the Blue and Gold.

However, the team wasn’t so lucky in the second game as it fell 4–2 as Macari was credited with the loss.

The team finished the regular season with a 20–12 record and 11–3 in Empire 8 conference play. The squad will start its postseason run May 1 against Stevens Institute of Technology.

The men’s tennis team was able to push its winning streak to four games after thumping St. John Fisher College by a score of 7–2.

The triumph allowed the Bombers to earn their ninth victory of the season and a 7–1 record in the Empire 8 conference.

The recent hot play of the team has earned them the right to host the Empire 8 Tournament from May 2–3 at the Glazer Arena.

Junior Chris Hayes said the team performed well over the weekend but understands the team faces the real challenge May 2.

“We knew Fisher was going to come to play, but I think our experience pushed us ahead,” Hayes said. “Now we move on to our biggest weekend of the year: The Empire 8 Conference Tournament.”

The South Hill squad will face off against the Cardinals in the semifinal at 1:30 p.m., and the winner will advance to play the winner of the Elmira College vs. Stevens Institute of Technology contest May 3.

The men’s and women’s track and field teams traveled to Cornell University to compete in the Big Red Invitational on April 26.

The Bombers will be traveling to Canton, New York, to compete in the NYSCTC Outdoor Championship hosted by St. Lawrence University from May 1–2.