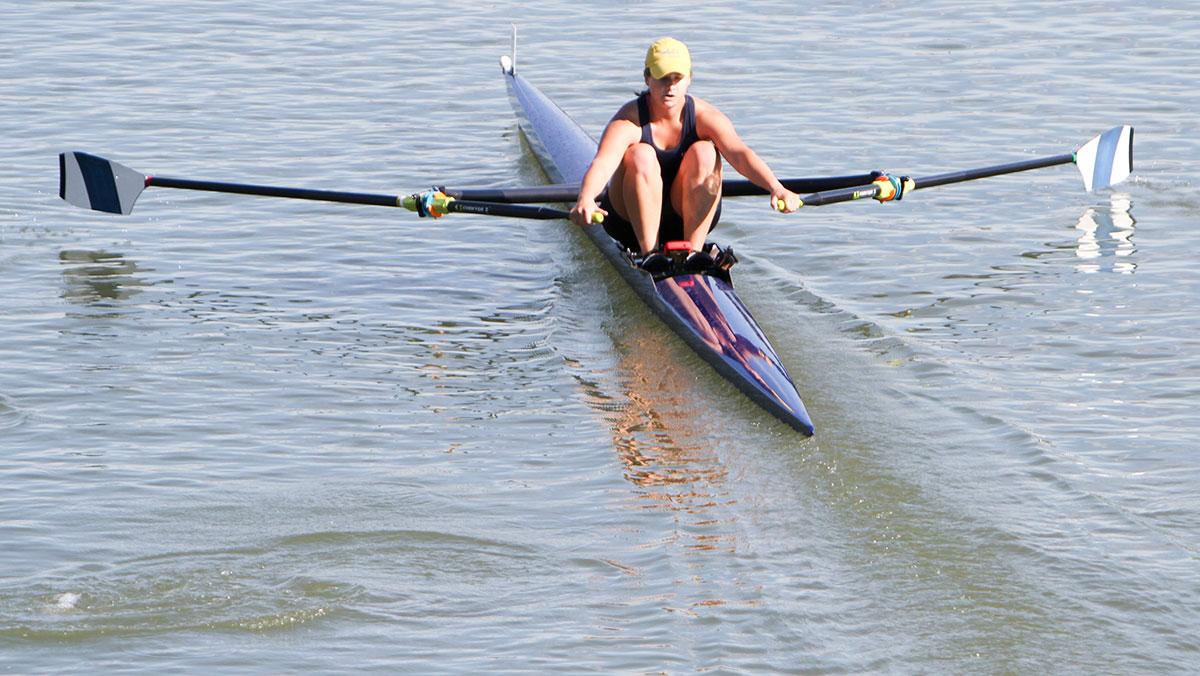 Jennifer Williams/The Ithacan
Senior Delaney Pfohl competes in the single boat competition during the Sculling Invitational on Sept. 28 at the Cayuga Inlet. The event was the second fall regatta hosted by the Bombers.
By The Ithacan — Ithacan Staff
Published: October 1, 2014

The football team continued its dominance over Empire 8 opponents this season with a 17–6 win against Alfred University on Sept. 27 at Yunevich Stadium in Alfred, New York.

After two quarters, the Bombers were down 6–0, but the offense began to click in the second half. Senior quarterback Tom Dempsey threw for 219 yards and two touchdowns, and senior wide receiver Vito Boffoli accounted for the majority of the passing yards, catching eight passes for 102 yards and both touchdowns.

The Blue and Gold’s defense wreaked havoc in the second half, forcing three turnovers, including an interception with less than a minute left in regulation by senior cornerback Sam Carney. After limiting an Empire 8 opponent to only one score for the second week in a row, Carney said he believes the defense is making significant strides.

“We pretty much stuck to our goals and knew that we could shut them down,” Carney said. “Our confidence is growing and you can feel us really starting to play well.”

The men’s soccer team fell 1–0 on Sept. 27 at Carp Wood Field to Stevens Institute of Technology in its second Empire 8 game of
the year.

The game was still 0–0 in the second half, until Stevens sophomore forward Jay Mikula scored the game’s lone goal in the 82nd minute.

“We played hard, played the toughest game that we’ve played,” he said. “Unfortunately, we made a couple of mistakes and did not get the result, but overall, the team felt good about how they played, and they should.”

On Sept. 30, the Bombers tied 2–2 at Hobart College in a non-conference game in Geneva, New York. Sophomore forward Sean Forward scored the lone goal in the first half. Hobart scored twice in the second half before sophomore forward Cobi Byrne scored in the 88th minute to secure a tie for the Bombers.

In its next game, the South Hill squad will face Elmira College Oct. 4 in Elmira, New York.

The women’s soccer team was dominant in a 1–0 victory against Elmira College on Sept. 24 at Carp Wood Field. The score was not indicative of the Bombers’ play, as the team controlled most of the possessions and had 19 shots on goal, compared with Elmira’s five.

Senior defender Kelly Pantason scored her first career goal when she drilled the ball from 30 yards out into the right corner of the net past the outstretched arms of the Elmira freshman goalkeeper Gabe Carmona. The Blue and Gold’s defense was superb again, earning its fifth shutout of the year. Pantason said the strong defensive performance can be attributed to the entire team.

“We just play very good team defense, and that’s always our goal,” she said. “It starts from the top down and really holding strong through the back.”

In their second game of the week, the Bombers won 2–0 against Houghton College on Sept. 27 in Houghton, New York, while earning their sixth shutout in eight games. Junior forward Sarah Woychick and junior forward Kelsey King each scored for the Blue and Gold, which had 21 shots on goal.

The Bombers hope to continue their strong season on Oct. 4 against Stevens Institute of Technology.

Head coach Janet Donovan said she has been impressed with the team’s resilience thus far this season.

“One thing that I have been discovering is there is no quit with this team,” she said.  “We don’t give up. There were points in the Keuka game where we were neck and neck, and then we would get to 20 points and we settle down and take control.”

Donovan added that she is looking forward to the competition this coming week.

With their record now sitting at 11–3, including 3–0 in Empire 8 play, the Bombers will look to continue their strong play against Alfred University on Oct. 3 in Alfred, New York.

The field hockey team continued to dominate at Higgins Stadium, edging two Empire 8 conference opponents to get back to a .500 record.

The Bombers shut out Houghton College 2–0 on Sept. 24 to win their first Empire 8 match of the season. Senior forward Danielle Coiro scored both of the team’s goals. Sophomore goalkeeper Katie Lass spearheaded a strong defensive effort by the Bombers, which earned her third shutout of the year.

On Sept. 27, the Blue and Gold earned a 2–0 win over the Nazareth College Golden Flyers at Higgins Stadium. The Bombers relied on a strong performance from Caitlin O’Brien, as the junior back scored twice for the win.

The two home shutout wins give the team a 4–4 record overall and 2–1 in E8 play. For its next game, the team will hit the road to face Elmira College on Oct. 4 in Elmira, New York.

The golf team had a record-breaking weekend, placing first in the Martin & Wallace Invitational Sept. 27–28 by shooting 627 as a team, an all-time best for the program in its six seasons.

For the second straight week, the South Hill squad set a single-round school record score of 308 — one shot better than last week’s score at the Mount Holyoke Invitational — en route to finishing first in the tournament.

Senior Sharon Li stood atop the individual podium with a two-day score of 147.

“I think it was our ability to manage the course and minimize bad shots,” she said. “If bad shots happened, we knew how to get ourselves out of trouble.”

The team will look for another milestone outing when it tees off at the Williams Fall Invitational on Oct. 4–5 at the Taconic Golf Club in Williamstown, Massachusetts.

The women’s tennis team is still undefeated this season after defeating Utica College 8–1 on Sept. 27 in Utica, New York.

Against Utica, the Bombers won five out of six matches in the singles competition, while in doubles, the team won all three matchups. In the No. 1 singles match, senior Alyssa Steinweis defeated Pioneers junior Rose Zaloom 6–1, 6–0.

From Sept. 27–28, other members of the team took part in the Intercollegiate Tennis Association Northeast Championships, hosted by William Smith College.

The team will next face Stevens Institute of Technology on Oct. 5 at Wheeler Tennis Courts.

The sculling team hosted its second annual Cayuga Sculling Sprints and competed in its first meet of the season on Sept. 28 at Cayuga Inlet.

The Blue and Gold’s double and lightweight double teams both received first place medals for recording the fastest times in their classes.

The event included sculling teams from South Hill, Colgate University and the Rochester Institute of Technology.

Each boat completed a 2,000-meter and 1,000-meter race. The Bombers’ quad came in second place behind Colgate University’s quad, falling by only .8 seconds with a total time of 16:03.1, compared to Colgate’s 16:02.3.  Junior Katie Ely, who sits in the bow of the quad boat, said she was pleased with the team’s performance in its first event of the season.

“I thought it was a good start definitely,” Ely said. “It’s all about confidence.”

The sculling team’s next race is the Head of the Genesee on Oct. 4 in Rochester, New York.