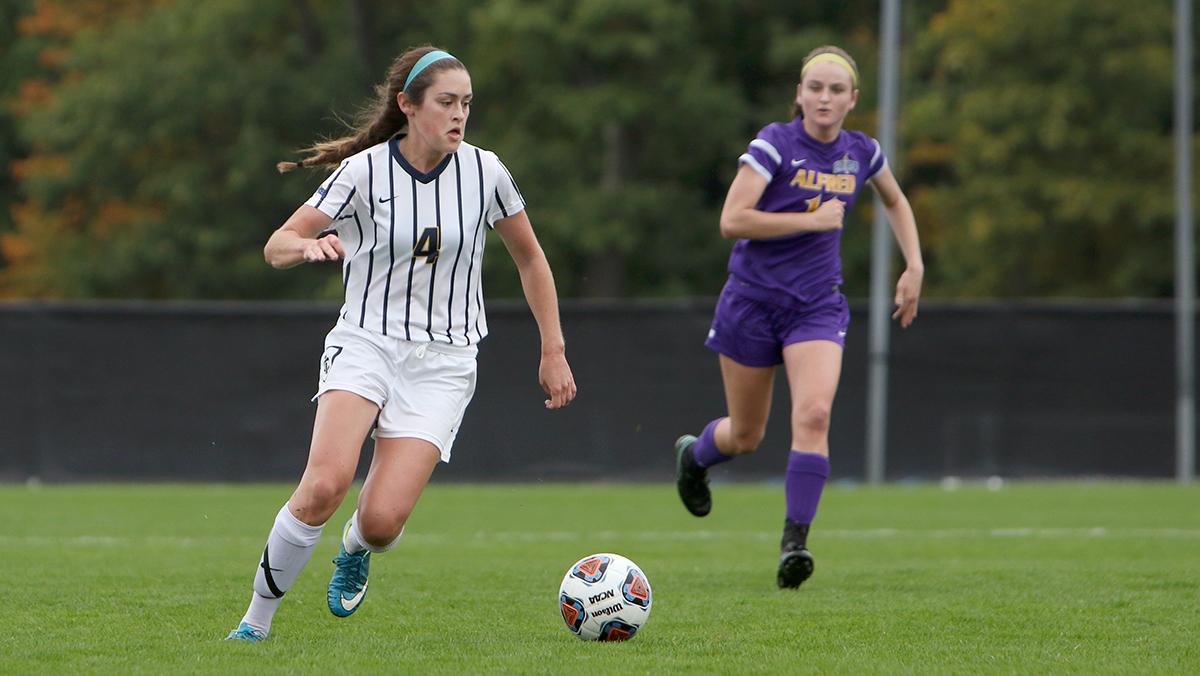 When senior forward Jocelyn Ravesi became a part of the Ithaca College women’s soccer team her freshman year, she was never supposed to step onto the field. She was a practice player until one day at practice that season when she was handed a uniform by head coach Mindy Quigg.

Ever since that day, Ravesi’s main goal has been to continue building up her physical and mental toughness. Now, as a senior, Ravesi is the team’s leading scorer.

Her freshman year at the college, Ravesi came into preseason weighing 100 pounds, and she said she was not as physically strong or as confident as the other women trying out. When it came to the end of preseason that year, Quigg gave her a call about her future on the team.

“Coach told me, ‘You aren’t where you should be. You can either stay on the team as a practice player or you can come back in the spring and lift with the team and see where things go from there,’” Ravesi said. “I totally respect her for telling me that because I knew that within myself.”

Though Ravesi said she technically made the team, she knew being a practice player meant she was not supposed to see any playing time. Practice players are rare, but she decided to stay on the team because, she said, it would be the best place to grow. Ravesi said her goal was to be able to one day make it onto the field during a game.

“I just have to thank my coaches because they constantly saw potential in me,” she said. “Even when I was the smallest, they saw room for growth and my teammates were consistently telling me I could do it. They’re my best friends. It’s been an incredible experience.”

Over the following few weeks, with encouragement from her teammates and coaches, Ravesi said she was able to improve greatly as a player. When she was a freshman, she said, she was not quick or decisive when she had the ball. During practice, her teammates helped her improve by putting her in high–pressure situations. That experience proved vital because when she was handed a jersey and put into a game, she said, she knew exactly what to do.

“Getting a jersey was just a huge huge deal for me,” Ravesi said. “It showed me to never give up and that opportunities will come.”

“It is so obvious how much Jocelyn has grown,” Demczar said. “She is probably one of the fastest people in the E8 and can beat almost any defender.”

Demczar added that Ravesi has also been playing with more confidence, and her touch on the ball has been sharper.

“As a center midfielder, I always look to play her the ball,” Demczar said. “I feel confident whether she’s checking to me or away that she’s going to get the ball and make something good happen. She always works so hard.”

On Oct. 26, 2013, Ravesi scored her first goal against Empire 8 competitors Stevens Institute of Technology. Ravesi said this was one of her favorite moments of her college soccer career.

“It was off of a cross from the outside, and I just tapped it in, and my hands immediately flew up in the air,” she said. “I was so in shock. It was just a really exciting moment for me.”

As the team’s leading scorer so far this season, she has tallied a team-high of 13 goals. Against Elmira College on Oct. 18, Ravesi tied a program record of four goals in a game in the Bombers’ 8–1 win.

Freshman forward Jordyn Haynes said Ravesi is the teammate to go to for encouragement.

“Jocelyn is kind of like a mom,” Haynes said. “She’s always really happy and encouraging to everyone even when we are down and never raises her voice.”

As the end of the season nears, Ravesi said, she is focusing on postseason play as well as maintaining the team chemistry that has brought them this far.

“This is our year to prove that we can make it to the tournament,” she said. “That’s our goal. We’re sticking to it and we’re going to try as hard as we can to achieve that.”