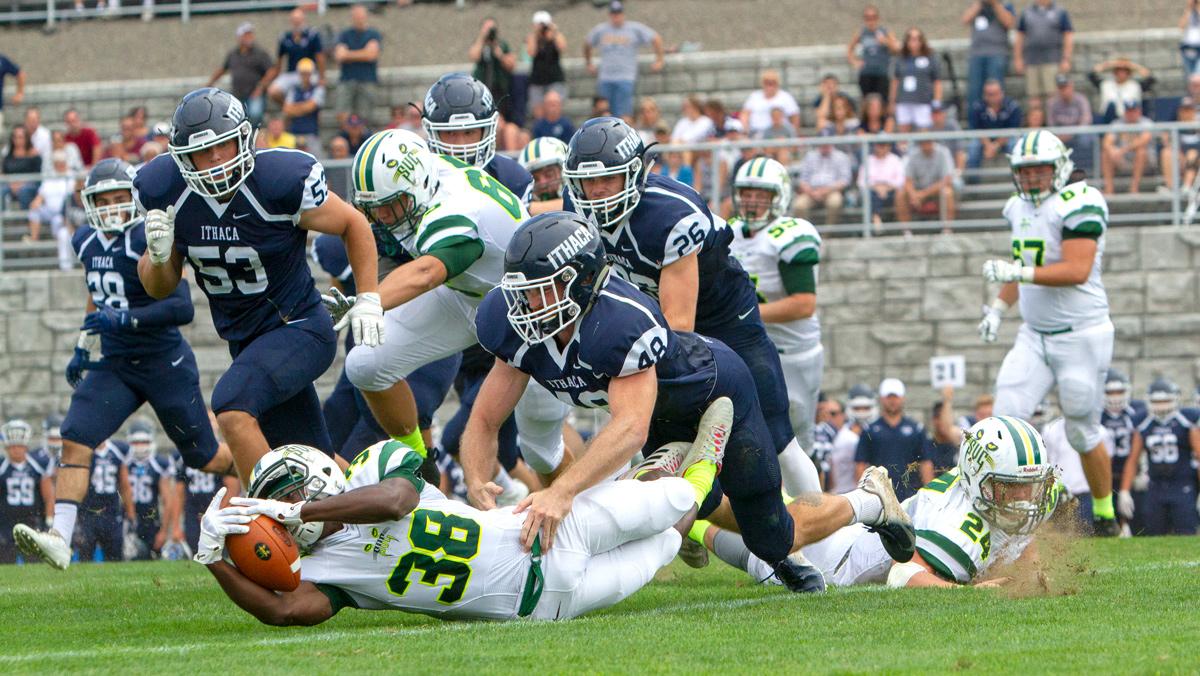 Playing against The College at Brockport, the No. 5 team in the nation, Sept. 8, there was only one highlight for the Bombers in the first half: Pat Minogue.

The senior strong safety forced a fumble in the second quarter, in addition to his nine tackles overall. It is the same story week after week, and Minogue, one of three football captains, has become the undisputed leader of the secondary defense this season.

Minogue is currently in the top five in three different defensive categories in the Liberty League standings — for tackles, tackles for loss and fumbles recovered — and leads the Bombers in the same categories. He has 33 total tackles — 16 of them solo — five tackles for loss and three fumbles through the first three games of the season.

“He’s one of the most dynamic players that I have ever been around,” defensive coordinator Mike Toerper said. “He can play outside on the slot. He can play inside linebacker. If we need to put him on the end, he can do that too. Having someone as versatile as him within this defensive scheme is something that is a really nice tool to have as a defensive coordinator.”

Minogue entered college as a defensive end but was told by former defensive coordinator Mark McDonough that he would be playing defensive back — specifically, linebacker. He played in six games during his freshman campaign and all 10 the next year.

“I was like, ‘Wow, I really need to learn what I’m doing,’” Minogue said. “Coach was there for me. The other players were there for me.”

As a junior, under the new leadership of Toerper, Minogue was again forced to learn a new position. This time, it was strong safety.

The strong safety position requires him to focus on defending the pass, but with his background as a linebacker and defensive end, he is able to move throughout the backfield to come up with big plays, regardless of what his assigned role is.

“He’s a hell of a football player,” Toerper said. “If we put him in different spots and we ask him if he can do things, he shows out here in practice that he can, and it’s really a huge help on game day.”

Minogue said he does not have a favorite position and is rather ready to do whatever is necessary.

“Whatever is best for the team, he said. “It doesn’t matter to me. As long as I’m making plays for the team.”

Eight out of the 11 starters on defense are seniors, including Ralf Silva, fellow starting strong safety. It’s part of the reason the defense is clicking so well this year, Silva said. The players have been through everything together for the past four years and have been waiting for the chance to be the leaders.

They held the Golden Eagles’ offense to just 13 points, the lowest number they have scored in the past two years. This was the same team they gave up 31 points to just a year ago.

“We’ve been playing together for a long time,” Silva said. “Since freshman year, we’ve been looking forward to this year. We have high hopes, and so far, it’s panning out. … We are just trying to keep it going. We like where we are at right now.”

Minogue also doubles as a punter, a position he was first introduced to as a freshman, although he didn’t punt in any games that season. He now averages just above 39 yards a punt and has a season long of 65.

Minogue has already started to bring in awards, earning Liberty League co-defender of the week after week one. Minogue was named to the D3football.com Team of the Week on Sept. 17 for his punting performance against Alfred University. He punted four times during the contest for a total of 204 yards.

This is his second Team of the Week honor, with his first being in 2016 when he logged nine tackles against Union College on Sept. 3.

He said his goals for the rest of the season are to just keep working hard and doing what he can do to make the team better.

“It’s a great time,” Minogue said. “I do what I can do to try and get us a victory. I don’t really feel like I do anything special.”

‘How IC Sports’: Senior linebacker Pat Minogue on Change in the Football Program

Through all my years of athletics, whether I was playing travel softball or mildly competitive tackle football with my brothers, I always anticipated playing a varsity sport in college.

A Blue and Gold homecoming