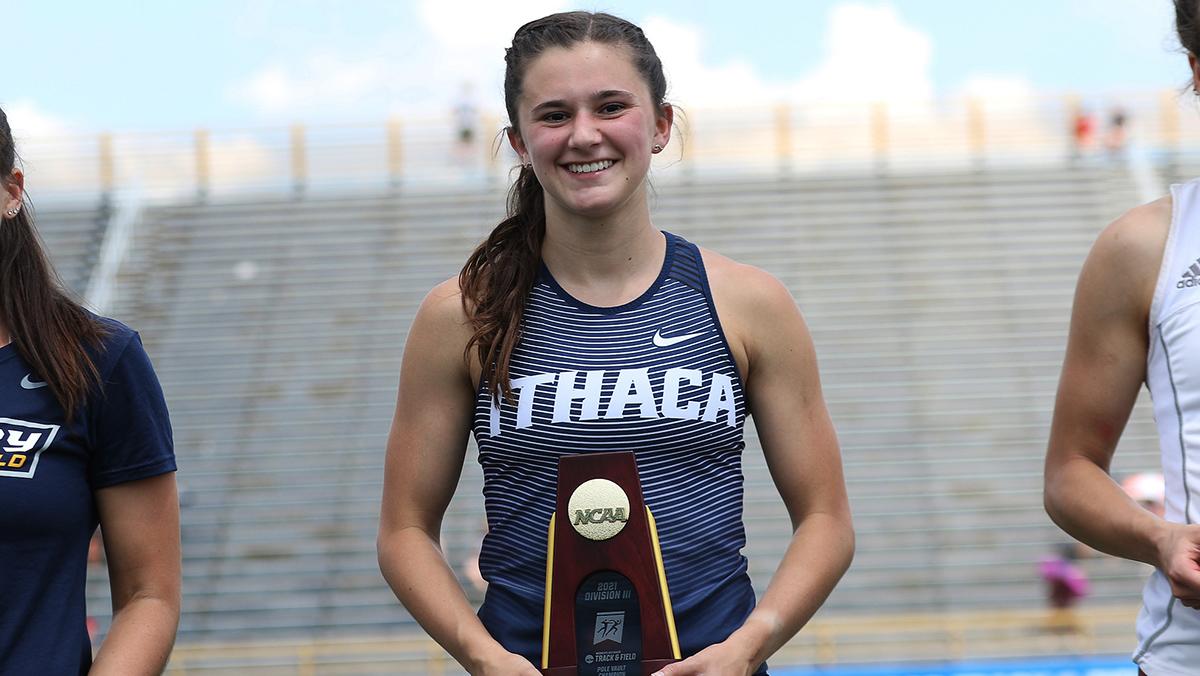 When Ithaca College senior Meghan Matheny started pole vaulting in eighth grade, she never would have believed that she would win a Division III national title during her collegiate career. Just a few years later, that is exactly what she did.

Matheny has been pole vaulting since middle school, but she said she did not consider herself to be good until her senior year in high school. There were times where she thought she would get to this point.

“Between the end of my junior year [in high school] and the end of my senior year, I improved my [personal record] by a foot and a half,” Matheny said. “And I won outdoor states my senior year. That was when I realized I actually figured this out and I started to get a lot more confident in myself. Until then, it was just something I was doing for fun.”

But even with her success in her first two years at the college by being named to back-to-back All-Liberty League teams for pole vault, Matheny said her junior season proved to be a difficult one. After qualifying as the second seed for indoor nationals in 2020, the meet was canceled. Matheny says she did not practice for almost four months, and even when she did, she lacked confidence.

“I struggled a lot from July  [2020] to January [2021]. I didn’t even run from a full run like I would in competition, I was not very confident, and I was just really struggling,” Matheny said. “I also dealt with a back injury this past year, and there wasn’t really any treatment other than taking time off, so that was really hard after not being able to compete for so long, and then having to deal with that.”

Despite her struggles, she still managed to be a positive impact to the other pole vaulters on the team. Sophomore Sara Altonen said that even with Matheny’s injury, she never stopped supporting the team.

“When she was injured at meets and practices, she was still always so encouraging,” Altonen said. “She’d give us helpful tips, like how to stay out of our heads and how to get back on track and ready for our next run.”

Altonen, who placed eighth in pole vault at the 2021 Outdoor National Championships in May, also said she looks up to Matheny as a role model, both as an athlete and as a teammate.

“She’s almost like a mentor for all of us,” Altonen said. “We all kind of look up to her, she’s just awesome. So it was great to see her come back and qualify for Nationals.”

At the 2021 NCAA Outdoor Championships, Matheny excelled. She won the pole vault event with a jump of 3.85 meters but missed three jumps at four meters. Even though she won, she said she will strive to join the “four-meter club” this season.

“It’s something that I want to do and something I attempted twice last year,” Matheny said. “I’d love to win [regionals and nationals] again, but I definitely want to jump four meters this year.”

The four-meter mark is notable in women’s pole vault, Altonen said. It is a major milestone, but Altonen is confident that Matheny can make it there.

“Four meters is huge,” Altonen said. “There are jokes about the four–meter club, because when you can clear that it’s kind of like ‘Oh my gosh, this girl’s really good’. But I 100 percent think she can do it. There’s no doubt in my mind.”

The competitive spirit that Matheny has is evident to her coaches as well as her teammates, head coach Jennifer Potter said. Potter praised Matheny’s work ethic and motivation to always get better.

“[Matheny is] intense, determined, motivated, and structured, and that’s why she’s a national champion,” Potter said. “She leaves nothing to chance and takes care of every detail.”

Matheny agreed that she is detail-oriented. She said keeping track of little things, like her body mechanics and pole placement, is part of her routine before jumps, even during meets. She said it helps her to stay focused in high-pressure moments.

“After every jump, I go over and talk to [pole vaulting coach Matt] Scheffler about what to change or what to fix in the next jump, and I have a little notebook that I write them in,” Matheny said. “And once I start running, I count down my steps from seven, but then once I take off, I don’t really think about anything. It just becomes muscle memory.”

As soon as she lands on the mat — whether she made it over the bar or not — she said she goes right back into thinking about what she can do better next time.

“If I clear, I’m excited, but I then immediately start thinking about what I need to change, and the whole process starts over again,” Matheny said.

Potter also said that Matheny is great at keeping calm under pressure, and her performance in the National Championship was no different.

“Some people get very weirded out as the bar goes up, but I knew she would be fine with that,” Potter said. “Because we’re usually one of the top teams in Division III, we have conversations about performing at a high level at Nationals…I knew [Matheny] would be good mentally when the height went up.”

Having already passed a major milestone by winning a national title, Matheny said her goal for the season is to help her teammates improve and send even more athletes to the National Championships.

“I’d love to have all the vaulters qualify for Regionals and send as many as possible to Nationals,” Matheny said. “I’m looking forward to seeing what we can do this year, what all my teammates can do.”