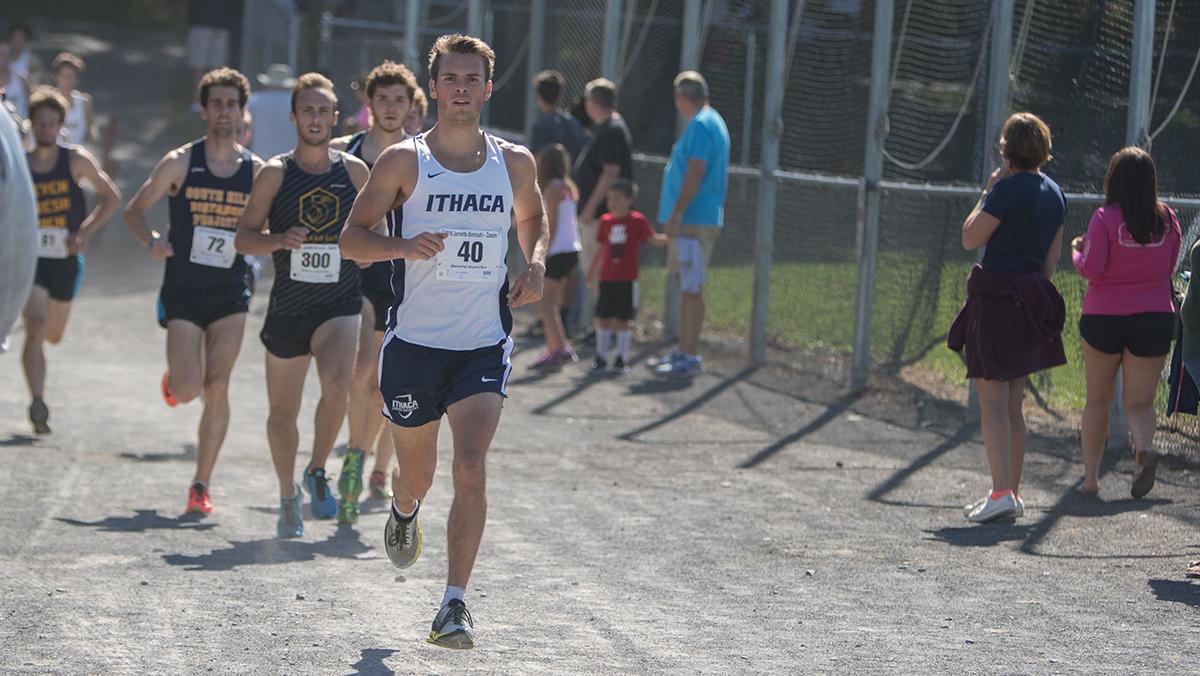 Since his freshman year on the cross-country trails at Ithaca College, senior Sean Phillips has shown he was capable of leading the pack. In his final year, he did just that.

As a senior, Phillips is a three-time Empire 8 Runner of the Week, and he was the only runner from the men’s cross-country team to race in the 2016 NCAA Division III Cross-Country Championships in Louisville, Kentucky. He finished his last collegiate cross-country race in 25:42.7, crossing the finish line in 148th place.

Staff Writer Becky Mehorter spoke with Phillips about his final cross-country race, his favorite team memories and what he expects out of his two remaining seasons on the men’s track and field team.

Becky Mehorter: What was your reaction to making Nationals for the first time?

Sean Phillips: I was just incredibly happy. It’s been about eight years of trying to make it to Nationals, all through high school. And last year, our team was about the first team to not make the national cut. We got fourth in our region, and personally, I got really close as an individual. So I was just so incredibly happy.

SP: It was an extremely exciting atmosphere, and there’s more people, like twice as many people, than any other race. People are all excited, hyped up. There’s people running everywhere with painted chests and screaming — a very energized crowd, a lot of people excited about running and excited to watch us race.

BM: How do you feel your last collegiate cross-country race went?

SP: It was pretty much the best way I could have ended cross-country. Being able to make it to the national level was really my goal for the season. Even though I would have like to go All-American and put forth my best race at Nationals, just making it was a huge goal for me. I couldn’t really have asked for a better way to go out for my senior year, unless my team made it, of course. I was really hoping my team was going to make it, but they all ran just about as hard as we could run.

BM: How is it different running by yourself, without your team?

SP: It really didn’t feel that different because about five of the guys, and then three more alumni, showed up. They road-tripped out to Kentucky to watch me race. It was awesome. Right before the race, I had a large portion of my team there at the starting line, so we did a team huddle and our coach got the energy going, and it felt normal to have all the guys there.

BM: Do you have a favorite memory from over the past four years?

SP: There’s a lot of things that stick out. Last year’s regional race sticks out quite a bit because we ran the fastest we’ve run in the past 12 years, since 2003, and we thought we made it to Nationals because we came in fourth. So that was probably the craziest race. We were so excited, so that one definitely sticks out. This year in particular, after the Lehigh invitational, our whole team was excited. I think we ran one of our best races there. So that one sticks out for me. And our Empire 8 Championship race this year, because I was able to win the race individually. That was our Conference race and our team was able to win as a whole with 30 points to the next team’s 68. So it was a strong performance, and we were really excited about that.

BM: How prepared are you for track season?

SP: Well, we’re all still in quite good shape from cross-country season. I think I personally was extremely tired from Nationals. I felt pretty wrecked, so I’ve been taking it really easy, so I’ve been running for 15 minutes, or 2 miles a day just to keep my legs loose, but not doing training of any sort over this break. And then as soon as we get back, we’ll be right back into doing 60–70–mile weeks, getting ready for track.

SP: In track season, we always want to try to do the triple crown — so, to win the conference championship in cross-country, winter track and spring track. … We did it my freshman year and my sophomore year. We weren’t able to do it last year. We really want to look to do that this year. So we’ll be gearing up to the Empire 8 Championship for indoor track and ultimately looking to get a lot of guys to States for indoor track and see if we can compete for a state championship title, then, ultimately, see how many guys we can get to ECACs [Eastern College Athletic Conference] and then the national championship.

Sports One on One: Senior cross-country runner Sean Phillips