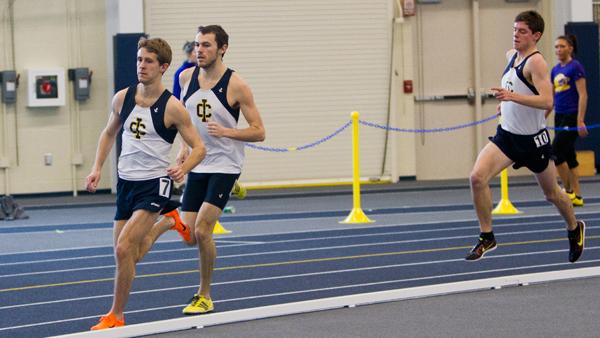 Though the indoor season has yet to begin for the men’s track and field team, senior distance runner David Geary is already setting his sights high.

Geary’s goal is to break 4:20 in the mile prior to winter break, a time that would put him significantly ahead of where the Bombers’ runners usually are at this point of the season. The limited schedule means he only has two opportunities to do so: the Cornell University Relays on Saturday and the Ithaca Tri Meet on Dec. 8.

Geary, who was captain of the men’s cross country team, is coming off of a successful fall season, during which he set a personal best time of 26:15 in the 8-kilometer distance at the NCAA Atlantic Regional Championships.

Many indoor track team members who were also on the cross country team this past fall are taking the first two indoor meets off to rest up from the long season and recover both mentally and physically to ready themselves for indoor competition. However, Geary decided not to take a break.

“I thought this would be a good opportunity to go out and see where I stand at this point, so early on in the season, and hit those qualifying times so later on I can focus on other events,” Geary said.

Geary began running the mile as a freshman in high school, and he said it has become his life ever since. Last year, Geary improved his mile time throughout the season and placed 6th overall at the Eastern Collegiate Athletic Conference championships out of 63 with a time of 4:15.95 that marked his personal best and set a school record.

Geary said he is hoping to maintain the momentum from the end of last year’s indoor season and check off one of his major goals right away this winter. The ECAC qualifying time for the mile for men this season is 4:22, meaning Geary would already secure a spot with two seconds to spare if he hits his goal in one of the season’s first two meets.

Distance Coach Eric Sambolec said he encouraged Geary when the senior runner proposed his time goals and his decision not to take off the first indoor meets following the cross country schedule.

“If he can start off at 4:20 this early in the season, that will set him up to be well under that by the end of the indoor season,” Sambolec said.

Sambolec said Geary’s go-getter attitude not only sets him up for achievement, it also sets a tone for the rest of the team to follow.

“He’s a great leader,” Sambolec said. “It’s always nice when some of the better guys perform early and lead by example. This shows the younger guys what they can accomplish.”

“David Geary is a great leader emotionally and by his performance,” Athanasatos said. “By him setting this goal, it motivates us all to be better athletes and to work hard right from the start.”

Sambolec said he is confident Geary will be able to accomplish his goal. Before the start of the indoor season, Geary expressed that he wanted to be running as fast as possible as soon as possible. But Sambolec said he told Geary to be patient, reminding him “You can’t get to 4:12 in one day.”

“Sometimes you have to run several competitions to get there,” Sambolec said. “You have to look at the process and the things along the way. Getting 4:20 before he goes away for break will set him up for something greater later on.”

Geary said his motivation to complete this goal lies in the relief that will come from hitting those qualifying times early.

“If I accomplish this goal, it will be very exciting for me,” Geary said. “It sets me up mentally and physically to try to run as I did last year and reach my ultimate goal of qualifying for nationals.”