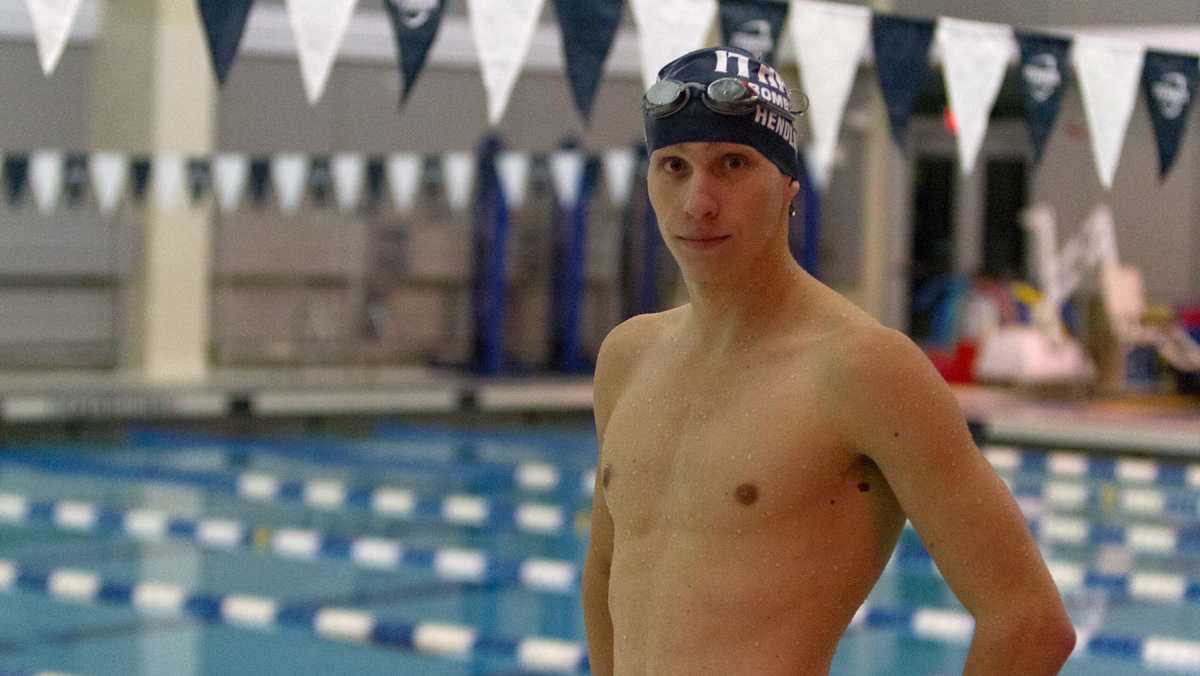 ELIAS OLSEN/THE ITHACAN
Senior Marshall Hendlin practices at night by himself some nights of the week to make up for team practices he misses.
By Andrew Sullivan — Senior Writer
Published: February 8, 2018

It is around 8:15 p.m. on a weekday, and Jake Lichter, men’s swimming and diving assistant coach, is instructing a swimming clinic at the Athletics & Events Center aquatics pavilion. Lichter is wrapping up the clinic when, unbeknownst to him, senior Marshall Hendlin enters dressed in a swim cap and speedo.

Hendlin began to train alone at night during his sophomore year. Due to his packed schedule as an occupational therapy major, there were times when he could not attend all of the team’s practices during the week. This semester, he usually misses just one a week. In the past, however, the number of practices he missed was as high as three per week.

Hendlin swims backstroke, freestyle and the individual medley and is also a member of the Bombers’ 400-yard medley relay team. He is one of the top backstrokers on the team, compiling four top-three finishes in the 100-and 200-yard backstrokes this season.

Hendlin has evolved as a swimmer throughout his journey thus far as a member of the Blue and Gold. He joined the team exclusively as a mid- and long-distance swimmer, swimming in 200-, 400- and 1,000-yard events. He actually holds the college’s tenth-best time in the 400-yard individual medley with a time of 4:16.51, which he tallied at the Upper New York State Collegiate Swimming Association Championships in 2015. Currently, he is considered a sprinter and a mid-distance swimmer, swimming in 100- and 200-yard events.

Sophomore Nick Bonnabeau also trains during an alternative time due to schedule conflicts. Yet, while both swimmers work out separately from the team, Hendlin is the only one who trains at night. Bonnabeau trains in the morning at 11:00 a.m.

Usually, Hendlin comes in to work out around 6:15 p.m., a bit after the team concludes its practice. However, there have been nights when he is not able to hit the water until 8:00 p.m. or later. Nonetheless, he still finds the time to put in the work and keep pace with his teammates. Since he is the only OT major on the team, he is the only one that misses some evening practices.

Hendlin said he would be lying if there were not days when he did not feel like working out. He said he tries to remind himself in those tiresome moments that there will be days like these, but that is just part of being a student-athlete.

“When you’re there and you’re thinking, ‘Wow, this is not what I want to be doing right now,’ you have to tell yourself, ‘It’s going to be one of those days,” Hendlin said. “It might just be a bad day, but that’s part of what you’re here doing,’”

He said walking into the team’s locker room and reading the team and personal goals for day-to-day practices written on the whiteboard not only informs him what he needs to accomplish that day but they also motivates him to train during the late hours.

If Lichter is still at the pavilion, he will sometimes give Hendlin the rundown of what the team practiced that day. He said Hendlin takes a no-nonsense approach when he arrives for his nightly workouts. Even if it is a challenging two-hour workout, he said Hendlin will tell him, “Ok, I’ll get it done.”

Usually, Hendlin has the pool to himself, but occasionally, Lichter said if he is still at the pavilion he will watch Hendlin workout and perform at a high level.

“I would look over and I’d see him just crushing these workouts all by himself,” he said. “In my experience, I’ve worked with a number of guys who’ve come in alternate practice times. I could only think of a few who really were doing it to the same extent that he is doing it to.”

This is not a new routine for Hendlin either. Last semester, Hendlin worked for two weeks in Montour Falls, New York, at Schuyler Hospital as part of the fieldwork requirement for his major. Even though he had to travel a half an hour to Montour Falls, work an eight-hour shift and drive back to Ithaca, Hendlin would still set aside time to work out.

Head Coach Kevin Markwardt said he was astounded by Hendlin’s commitment to keeping up his training throughout that period.

“There’s a lot of people that would just be like, ‘I just can’t do it. I’m just going to miss those two days a week,’” Markwardt said. “He would come in here and get it done.”

During his sophomore and junior seasons, he occasionally swam mid-distance events of 200 yards, and he started to dabble in 100-yard sprinting events.

“My favorite race is the four-by-four relay because it’s at the end of the meet, everyone is usually pretty tired,” he said. “You’re with a group of people — three other guys — and you just have to get up and sprint a hundred [yards]. I really like the atmosphere, the motivation that you can get for one last race at the end of the meet.”

This season, Hendlin is the lone senior and one of the captains. He is the last individual remaining from a small 2014 recruiting class of four swimmers. Hendlin has helped lead the Bombers to a 10–3 overall record, with a current five-meet winning streak. Markwardt said the fact that he is the only one left from that recruiting class further underscores his determination as a student-athlete.

Hendlin said although he misses those who were in his recruiting class, he relishes the opportunity to compete with the current squad, particularly the underclassmen.

“There’s a leadership position that absolutely needs to be filled,” he said. “That pushes you to step up. If you see some guys who don’t really understand what they are doing, you see some guys maybe slacking off in practice. It’s really up to you to step up and say, ‘Hey, this needs to be done this way. Hey, you need to pick it up a little more.’”

Even though this is his last year of eligibility, Hendlin said he plans on staying in Ithaca and supporting the team. He said achieving personal-best times in his events is something he hopes to continue to do at the Ithaca Invitational on Feb. 10, as well as for the remainder of his last season with the Blue and Gold.

“Every single meet, I’m going for some lifetime-bests,” he said. “This is my last big meet, so anything that’s the best time for me is a goal.”