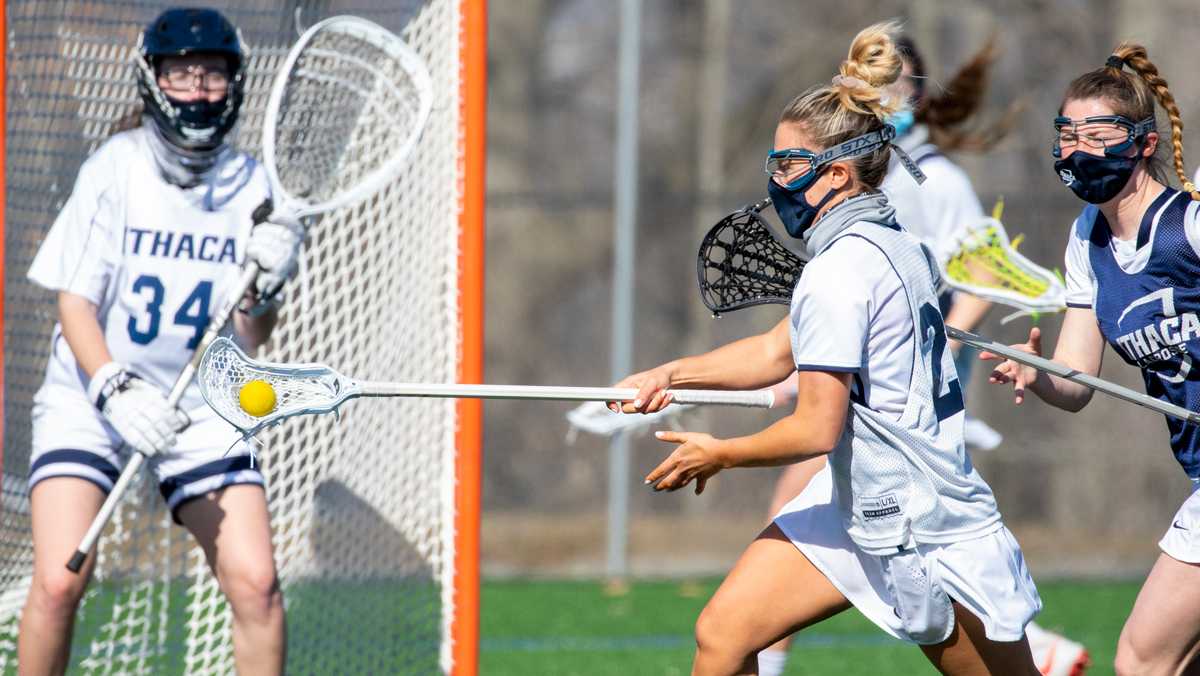 Ana Maniaci McGough/The Ithacan
Senior midfielder Jacqui Hallack is wrapping up her best season as a Bomber to cap off her college career.
By Devan Adegbile — Staff writer
Published: May 6, 2021

When the Ithaca College women’s lacrosse team had its 2020 spring season canceled, senior midfielder Jacqui Hallack’s strong work ethic did not let her take time off. Hallack trained from April to December in 2020, by herself for the most part, and it has paid off with her having her best season as a Bomber this spring.

Last year, Hallack paced the club with 26 draw controls and led the Bombers with 24 points on 22 goals and two assists. This season, Hallack followed up her performance by scoring 66 goals and tallying 13 assists through 13 games. She has earned awards and recognitions like being named Liberty League Offensive Player of the Week four times, Liberty League Offensive Player of the Year and Intercollegiate Women’s Lacrosse Coaches Association (IWLCA) Player of the Week.

She opened the season with 11 draw controls against SUNY Cortland on March 17 and nine points on seven goals — her career-best — and two assists, matching a career-high. Hallack said having early success made her hungry for similar results throughout the season.

Hallack currently sits at third in career goals, ninth in career points and has the third-most goals in a season in program history. Hallack has always been productive during her time playing with the Bombers, winning Liberty League Co-Rookie of the Year in 2018, and has made two All-Liberty League First Teams as well as the IWLCA First Team All-Empire Region.

“She has been a crucial part of our success, she pushes us in a way that we don’t get complacent with where we are,” Hallack said.

Moore said she thinks back on how Hallack has grown tremendously as a player and a leader since she first became a Bomber. Moore said Hallack has a cutthroat determination to succeed in everything she does, and that pushes the rest of the team to do their best as well.

“As a coach, it is always fun when you have people so competitive and want to win, it doesn’t matter what you are doing, it is fun when you have athletes that are so driven,” Moore said. “When they see someone who deserves recognition get it, it encourages the team to work harder.”

Moore said Hallack sets a great example to the rest of the team and holds people accountable for their performance on the field and life off the field.

“In the absolute best way, she is confident in her ability, she is really hard-working, she is a great leader and teammate,” Moore said. “It is easy for her teammates to respect her because she is so competitive, she has earned the street cred to hold people accountable.”

Hallack’s positive attitude on the field has earned special admiration from many of her teammates, including senior midfielder Megan Motkowski.

“She is one of the hardest working lacrosse players I have ever played with,” Motkowski said. “She wants to succeed in everything and she works so hard to make sure that she does.”

“Being the fifteenth one, you never know how you will fit in, but Jacqui made it so easy,” Motkowski said. “She helped me build chemistry with the other girls. She has everyone’s best interest at heart on and off the field, she pushes me to be the best lacrosse player I can be.”

Hallack is one of the four team captains this season. Part of the responsibility of being a captain for the team is to decide how the squad needs to improve from year to year. Moore said Hallack’s reputation as a hard-working teammate and one of the team’s best players make her an easy leader to follow.

Hallack said the team got momentum early in the season after its win against SUNY Cortland. She said despite losing the seniors from last year — midfielder Katie Welch, attacker Bailey Herr and defense player Becky Mehorter — the team still has good leadership. Hallack said playing without them was a huge turning point for the team because it allowed her to step up more as a leader on and off the field.

Hallack’s productive campaign this year led to the team having a perfect regular season, leading the program to a 12–1 record and a Liberty League championship appearance.

As the end of Hallack’s collegiate career approaches, she said she wants to end it by going far in the NCAA Tournament this year. Their path to a national title will start in Lexington, Virginia, against Notre Dame University of Maryland on May 9.

The Bombers have evolved into being a constant presence in the NCAA Tournament under Moore’s tenure, and although they could not bring a Liberty League championship back to South Hill this season, Hallack says her goal for the team was greater than just winning the conference.

“I feel like right now we have the skill and ability on this team and the athleticism to make a run in the NCAA tournament, the biggest thing is to always play as a team and not let the competitor outplay us,” Hallack said.