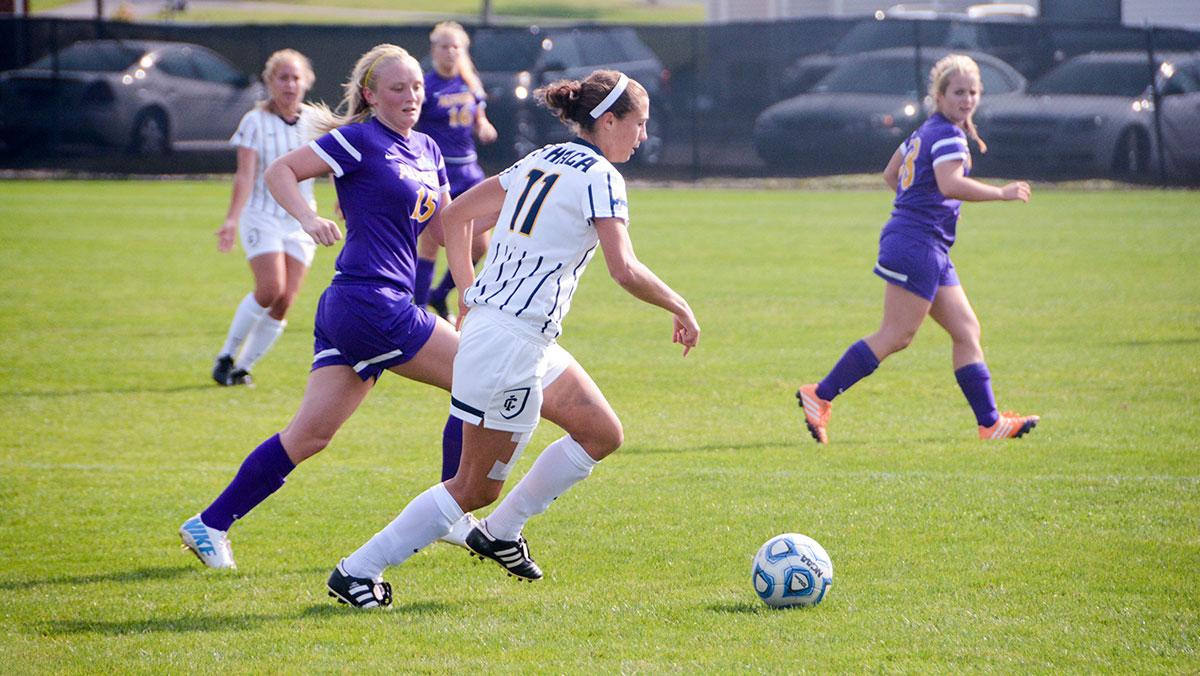 For head coach Mindy Quigg, the beginning of every women’s soccer season is a time to solidify defensive strategy and drill the defense-first mindset that has led her teams to 17 NCAA playoff berths since she took the reins of the program in 1994.

“We spend a lot of time in the first four weeks hammering down zonal defending and responsibilities,” she said. “We play team defense. We attack as a team, and we defend as a team.”

After posting 15 shutouts in 24 games last year, the 2014 squad has opened the season with the same defensive tenacity, shutting out opponents in four of its first six contests. But while the Bombers’ success on defense has undeniably continued, it has come without the experience of last year’s back line, which featured three seniors and then-freshman Aimee Chimera.

This year, Chimera is joined on the back line by senior Kelly Pantason, sophomore Lindsey Parkins and freshman Kendall Cirella.

This new, younger lineup has allowed Chimera to step into a larger leadership role. Though still just a sophomore, last year’s Empire 8 Tournament Most Valuable Player said the lessons last year’s back line taught her have applied this year.

“Last year there was definitely more of an already-set back line, so I was kind of just able to fill a hole,” she said. “They were very strong and confident and expected a lot of me, and that really helped me transition this year because they were telling me exactly what to do.”

Now, it is Chimera helping direct the newer players, just as last year’s back line helped her. She said working with Pantason, the only other returner on the starting back line, has been key in helping Parkins and Cirella adjust. Though Pantason did not start last year, her three years on the team have added an element of experience to the otherwise youthful back line.

Cirella, who is the only freshman starter on the team, said Chimera and Pantason have created a positive environment that has helped her adapt to her role.

“During practice, we high-five each other after everything and are very positive,” she said. “It was kind of nerve-wracking at first, but all of the upperclassmen have really helped me boost my confidence.”

The new duo of defenders has helped the Bombers to a 5–1 record to begin the season. The team has allowed just three goals, two in its loss to the University of Rochester on Sept. 13 and a third on Sept. 20 in a 6–1 victory over Alfred University. Neither player has come out of a game yet, and Quigg said they have been instrumental in the team’s defensive success.

While both Quigg and Chimera stressed the importance of team defense, Chimera also said each of the new defenders brings something to the team, creating a different dynamic.

“Lindsey is very explosive on offense, so she has played a great role in joining in on the attack,” Chimera said. “Kendall is one of the best 1v1 defenders on the team, and she has done a great job of controlling the flow and communicating to Lindsey since they play next to each other.”

Though the defense has been successful thus far in the young season, Chimera said due to the inexperience of the back line, minor breakdowns have allowed passes to slip through the line and created the few opportunities that opponents have had to score.

“Trying to minimize [breakdowns] is key,” she said. “As we start to face better teams, we will be challenged more.”

The Bombers began conference play on Sept. 20 with a home game against Alfred University. Their most challenging conference opponent will likely be Nazareth College, which is receiving votes in the National Soccer Coaches Association of America poll. The Blue and Gold are set to face the Golden Flyers on Oct. 12.

Given her defensive line’s inexperience, however, Quigg is satisfied with its continued improvement. She said time and experience will help her young back line mature.

“We are right where we need to be,” she said. “They all work extremely hard. It looks like a different style because maybe we aren’t as quick sometimes. But that will come with experience, and we are getting quicker as we go.”