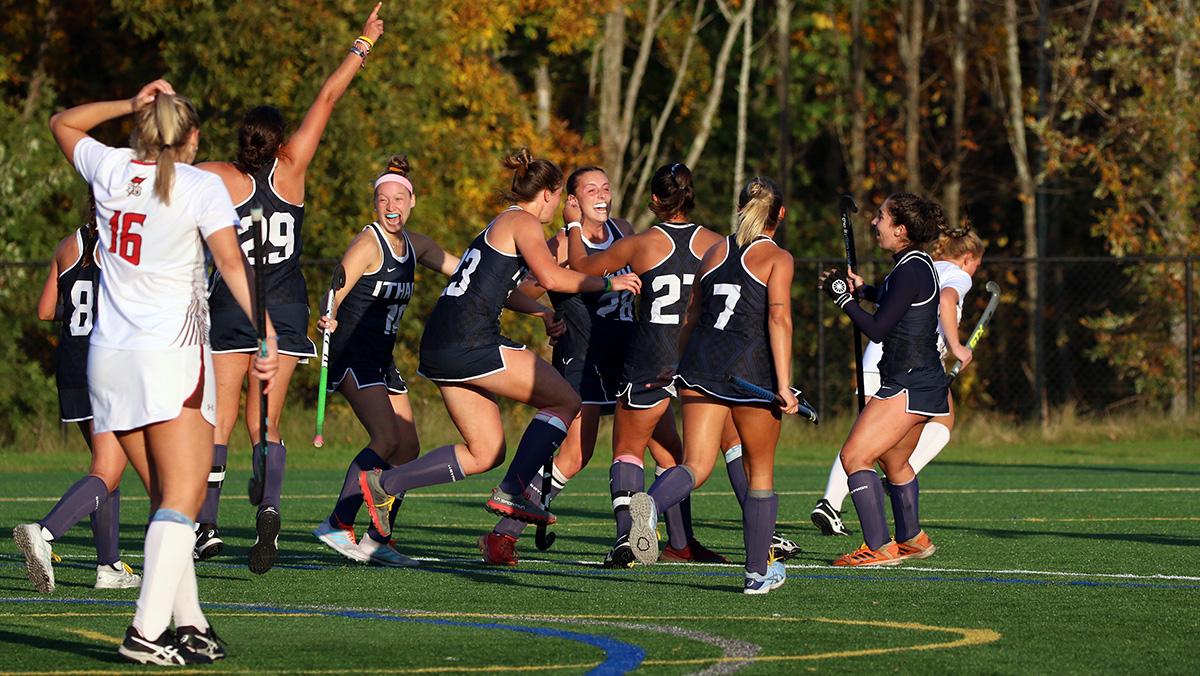 Ana Maniaci McGough/The Ithacan
The Ithaca College field hockey team is one of the six squads representing the Bombers in the Liberty League postseason. The team clinched the No. 1 seed in the tournament after its win Oct. 22.
By Daniel King — Staff Writer
Published: October 28, 2021

As the fall regular season winds down for Ithaca College Athletics, postseason tournaments are set to begin, and six teams are looking to bring home a Liberty League Championship.

The men’s and women’s cross–country Liberty League Championships and field hockey’s championship will be Oct. 30, the men and women’s soccer Liberty League Tournament will kick off Nov. 2 and volleyball’s championship will begin Nov. 5. These six teams are familiar with playoff competition, collectively making postseason appearances in 2015 and 2018. During the college’s last fall athletics season in 2019, five of the six squads earned spots in the playoffs, with the women’s soccer team falling short.

“It feels really good to have all this momentum behind us heading into the postseason,” Mullen said. “We’re just trying to ride the wave and see where this ride will take us.”

St. Lawrence was a team that Mullen mentioned would be one of the Bombers’ tougher opponents in the upcoming postseason.

“In our game against them, they came out and scored the first goal, but we never let up,” Mullen said. “It just shows how relentless our team is and how we can overcome it. But the Liberty League is a tough league, and I expect everyone will be on their game.”

Mullen attributed the team’s success this season to the way the coaches prepared. She described how pratice time is devoted to specific areas of the game to better prepare the players for their upcoming opponent.

“They put us in the best position to win on any given day,” Mullen said. “Every time we step on the field, I always feel that we are always the favorite thanks to their preparation.”

Mullen went into this season believing this would be a rebuilding year for the program. As the field hockey team is set to begin its postseason tournament, she senses this current group has a unique determination.

“Our team has an entirely different vibe and culture,” Mullen said. “We’ve pretty much started from scratch with this team, and we’ve built everything and earned every accomplishment we’ve gained so far. With this being a rebuilding year, we’ve developed a great team culture.”

Senior Benjamin Tiber and the men’s cross–country team are looking to bring home gold in the Liberty League Championship.

“I knew from the start we were a postseason team,” Tiber said. “We started running faster as the season progressed. We are doing great already, but I feel we will start seeing even better times as we hit the championship and regionals.”

Following the Cornell Reif Memorial Run on Oct. 22, the team has turned its attention to the postseason, and Tiber went on to say the team is prepared for the upcoming championship race.

“We’re all very excited,” Tiber said. “Our energy and morale is high, and everyone is very excited to race on Saturday. It feels like the season only started yesterday but now we’re heading into the postseason.”

Tiber said this season, the team has been consistent and everyone has done their part. Tiber said that one person cannot carry a team to a championship, and that it will take a team effort to get it done.

“Everyone plays a key role in bringing home a championship,” Tiber said. “There isn’t any individual person I would say. Everyone is playing their part in running the race and trying to get the team to move on. The goal has been and always will be nationals.”

Tiber said he believes Rensselaer Polytechnic Institute (RPI) will provide a challenge for the team in its pursuit of a Liberty League Championship. The teams only met once in the regular season in the Saratoga Invitational on Sept. 25 in Saratoga, New York. The Bombers finished third, right behind the Engineers.

“RPI has always been our biggest rival,” Tiber said. “In cross country, we’ve gotten close to beating them. In the beginning of the season, they’re running very well, but we always get very close to them. I believe we have a very good chance of getting them this time.”

In his first season as head coach since being promoted in May 2020, Garret Eldridge is preparing for the men’s soccer team’s run at a Liberty League championship.

The team went through a losing streak to start the season, but Eldridge said he was impressed how the team bounced back over the course of the season.

“Since our 2–4–2 start, we have gone 5–1–2, beating some very tough Liberty League opponents,” Eldridge said via email. “I think it shows the character of the players that we have turned it around. It comes down to guys deciding each and every day that we aren’t going to lose.”

Eldridge said the players have rallied down the stretch and become a close group on and off the field, although it is just his first year as the Bombers’ head coach.

“This team is truly a team,” Eldridge said. “We certainly have had individuals who have stepped up, but the key to our success comes down to each player being ready to play when their time comes.”

The South Hill squad has one more game to play before the championship tournament. Eldridge said his team is focused on its remaining game and it’ll be focused once the postseason begins. While the team is still waiting for its official seeding, Eldridge said he knows the Liberty League is full of difficult opponents and all will provide a challenge. In the recently released NCAA Division III rankings for Region III, three out of the eight teams listed are Liberty League programs.

“The league is one of the toughest in the country,” Eldridge said via email. “Any team good enough to make the playoffs has every opportunity to get hot and get themselves into the NCAA tournament.”

Similar to the men’s team, the women’s soccer team is setting up for its own postseason run. The team is making its return to the conference tournament for the first time since it lost to Rochester Institute of Technology by penalty kicks in 2018.

Graduate student Kelsey Espenhorst is hoping to make an impact come the postseason. While the women’s soccer team is guaranteed a postseason spot, it still has one more game to play before the seeding is officially set.

“We have always taken it one game at a time,” Espenhorst said. “We always say ‘You’re only as good as your next win.’ We’ve said that from the beginning and we will continue to say it. While we’re excited for postseason play, we know we have to finish strong.”

Espenhorst has been a member of the team since 2017. Now concluding her fifth year in the program, Espenhorst has seen different iterations of this team. Each previous team had its strengths, however, she said the wide-ranging levels of experience will help the team in the postseason.

“Five different grade levels bring a lot of dynamics to the team,” Espenhorst said. “We see a lot of different rotations, which means a lot of people get to see time. We have that depth now compared to years past when maybe we didn’t. It has made a big difference in games.”

“They’re the first place team right now, they usually always are,” Espenhorst said. “We’re always chomping at the bit for them, and hopefully, we get to see them again in the Liberty League Championship.”

With Espenhorst being one of four graduate students on the roster, she is excited for the chance to go out and bring home a championship with them.

“It’s been really incredible to go through those lows with them but now we have this opportunity to come back and hopefully bring home the win,” Espenhorst said. “It’s very motivating to want to get out there and bring it back home and make a stance for ourselves compared to where we left it off.”