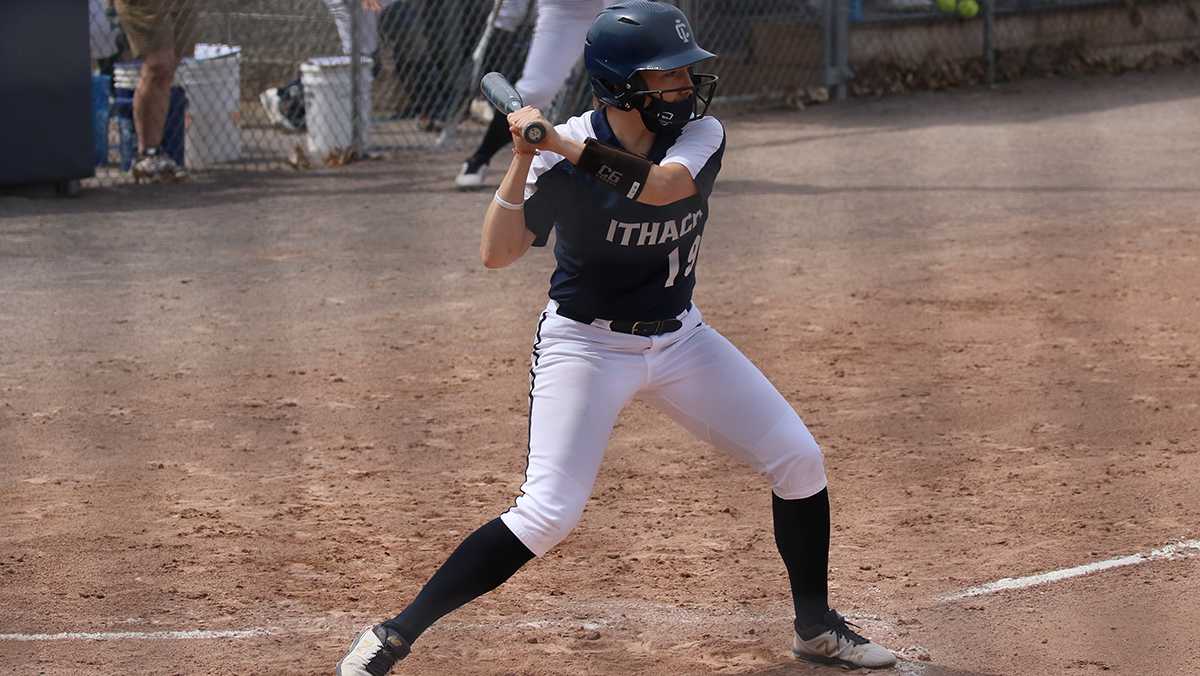 When Ithaca College softball player junior Julia Loffredo came back to Ithaca in September 2020, she had one goal: to have her best season yet. Loffredo went to the park nearly every other day to hit with her teammates and would go to the gym between hitting sessions. After months of training on her own and with the rest of the softball team, Loffredo is gaining national recognition for her performance this season.

After spending over a year away from Kostrinsky Field, the softball team had a successful start to its season. The South Hill squad currently sits 12–4 overall and is 8–2 in conference play. Loffredo has been one of the Bombers’ best players this season, as she currently has a batting average of .367 with 19 RBIs and five home runs. Defensively, Loffredo has played catcher, right field and first base, and has a perfect fielding percentage.

Loffredo started the season batting 7-for-7 with eight RBIs and three home runs in the team’s opening series against Elmira College on March 24. Loffredo said she knew it was an impressive accomplishment, but her focus was on winning the series.

“I wasn’t really thinking, ‘Wow, I just pulled that off,’” Loffredo said. “I was like, ‘Wow, we just beat Elmira. We had seven home runs as a team. I was thinking more team-based than my personal success.”

Loffredo was named Louisville Slugger/National Fastpitch Coaches Association (NFCA) DIII Player of the Week on March 31. Loffredo said the award meant a lot to her, especially since she became the first Bomber to win the NFCA Player of the Week award since 2014. However, Loffredo is still striving for more success.

“It’s really cool, but I’m going to take it with a grain of salt,” Loffredo said. “I want that award every week.”

Loffredo came to Ithaca as a catcher, but she transitioned to playing right field and first base this year. Head coach Hannah Quintana praised Loffredo’s ability to play multiple positions and still be one of the team’s best defensive players.

“Her versatility has been super impressive,” Quintana said. “She has one of our strongest arms in the outfield. She has thrown out runners from the fence and second base. She has just been an all-around athlete on the field for us.”

When Quintana became the head coach in 2019, the team tweaked its hitting philosophy and mechanics. After not being able to see the progress last year due to the shortened season, she is now able to review how the altered technique has benefited the team, especially Loffredo.

“We have a hit track machine that tracks exit velocity, and [Loffredo] is our clubhouse leader,” Quintana said. “It was fun for us to get outside and for her actually to see a real ball go over a real fence.”

The team could only play eight games in 2020 before the season was canceled due to the COVID-19 pandemic. During the time she was home, Loffredo continued to practice independently, and also had the opportunity to coach a travel softball team she used to play for. The experience of coaching helped Loffredo learn new parts of the game and approach softball with a new perspective.

“A different side of it is the mental side and being strategic in where to put my players and what pitch to call next,” Loffredo said.

Loffredo said her coaching experience helped her improve her hitting.

“I can predict better what the pitcher might be throwing next at me,” Loffredo said. “I got to really own my mechanics better because I had to teach people how I use my mechanics. It really made me think if I’m telling my players these [fundamentals of hitting] are important, I really should embody that.”

As someone who both played and coached, Quintana said she understands how that coaching experience was valuable to Loffredo.

“Any time you’re trying to teach somebody else, you have to have a different level of understanding,” Quintana said, “Julia, with her softball mind, getting the opportunity to impart those teachings on to somebody else was very impactful to her.”

Loffredo has been able to help the Bombers beyond playing well. Junior outfielder Daniella Mulvey said she brings an energetic spirit to the field.

“[Loffredo] always has a ton of energy and a really positive attitude that lifts everyone around her up,” Mulvey said. “She works hard, loves to compete and pushes everyone to do their best.”

Not only is Loffredo experiencing a good start to the season, but the softball team as a whole is as well. After a 2-6 record in the shortened 2020 season, the team is off to a much better start. Loffredo said the team is using last season’s abrupt end as inspiration to leave it all out on the field this year.

“We’re not taking anything for granted,” she said. “We’re very cohesive and we molded better because we got to know more about each other better this year.”

Loffredo said she is aware of how good her season has gone so far, but it is a day-by-day battle to keep improving and performing.

“I’m not looking to have the highest batting average or the best fielding percentage,” Loffredo said. “I definitely want those things, but I just want to win. I will do anything for my teammates and coaches. The goal is to win a championship.”