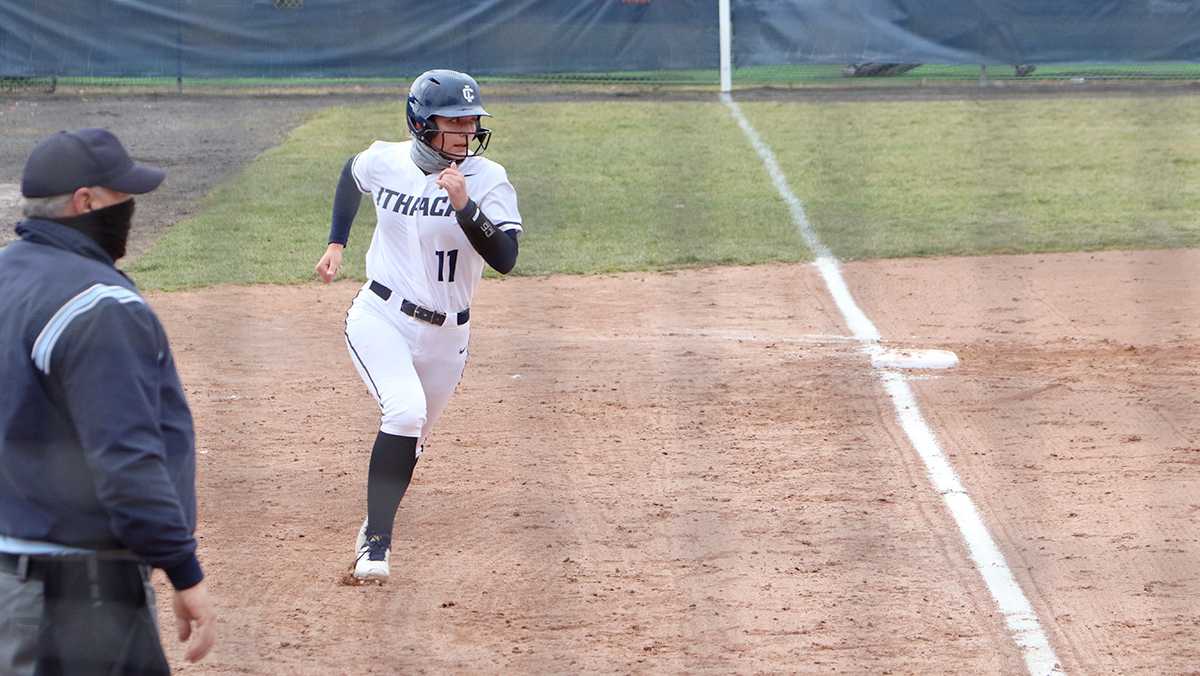 Ana Maniaci McGough/The Ithacan
Junior outfielder Kailey Collins hit the game-tying double and started a double play to end the first game against SUNY Oneonta on April 5. The Bombers won the first game 7–6 and the second game 2–1 to improve to 9–7 on the season. Photo taken March 24, 2021.
By Dustin Terry — Staff Writer
Published: April 5, 2022

The Ithaca College softball team played its home season opener against SUNY Oneonta in a doubleheader at Kostrinsky Field Tuesday afternoon. The Bombers swept the Red Dragons in the two game series, winning the first game 7–6 and the second game 2–1.

Junior pitcher Riley Piromalli started game one in the circle for the Bombers and struck out two batters in the top of the first. In the bottom of the inning, graduate student outfielder Emma Kindblom put the pressure on Oneonta quickly with a leadoff walk, setting up a two-run blast from sophomore outfielder Hudson Hassler to give the Bombers a 2–0 lead. Freshman infielder Sela Scheinman kept the bats going for the Bombers, driving in senior catcher Julia Loffredo for a 3–0 after the first frame.

However, Oneonta got the bats going in the second inning, rallying for six runs to take a 6–3 lead. Freshman pitcher Melody Kappel relieved Piromalli during the inning, getting the last two outs in the second and throwing a three-up, three-down inning in the third.

The Bombers got one run back in the bottom of the third inning to make it a 6–4 ballgame after a well-executed double steal by Loffredo and Scheinman.

Kappel continued to shut–down Oneonta through the fourth and fifth inning, but the Bombers struggled to get the bats going. However, two walks and a hit-by-pitch loaded the bases for the team in the bottom of the sixth inning. The Bombers scored three runs to regain a 7–6 lead on a double from junior outfielder Kailey Collins and an errant throw at the end of the play.

The Bombers held onto the win when Collins capped off game one by catching a fly ball in left field and throwing the runner out first for the double play.

The team got the bats going early again in game two with Collins hitting a two-run double. Despite loading the bases, the Bombers could not get any more runs across, leading 2–0 after the first.

Freshman pitcher Anna Cornell got the start in the circle, striking out the first six batters for Oneonta. The Bombers struggled once again to get the bats going after the first, but were strong defensively to hold their lead.

Oneonta got one run back in the fourth inning, but the Bombers defense held strong making good plays in the field. The game was called due to darkness in the middle of the fifth inning and the Bombers won 2–1 to earn the sweep over Oneonta.

Head coach Hannah Quintana said she was grateful and excited to earn wins in their first home games.

“I was really proud of how we got two team wins today,” Quintana said. “I love the way we pitched. Our defense was outstanding, and we really made some key plays and we got key hits at key times.”The Bombers improve to a 9–7 record after the two wins. The team will travel to Clarkson University and St. Lawrence University this weekend, but will return to Kostrinsky Field on April 12 to host a doubleheader against Alfred University.