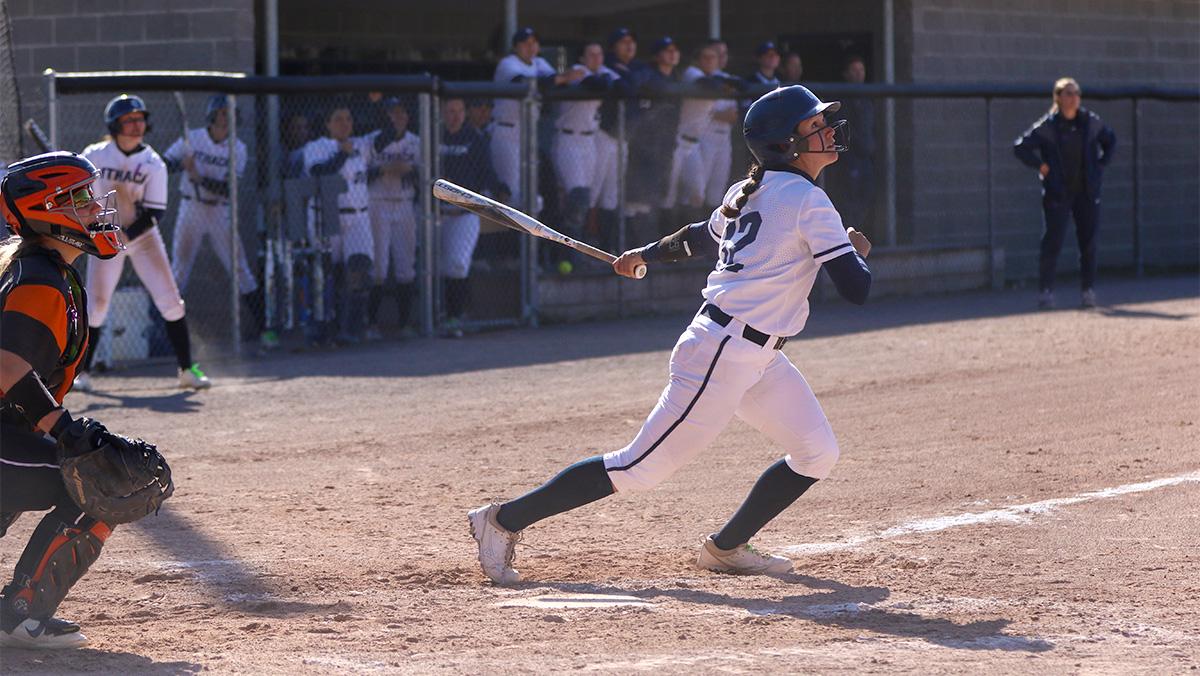 The Ithaca College softball team played its final home series of the season against the Rochester Institute of Technology at Kostrinsky Field for a doubleheader Friday afternoon. The Bombers scored late in game one to earn a 4–2 victory and were hot at the plate in game two winning 8–0 by mercy rule.

Senior outfielder Julia Loffredo finished 2–3 at the plate with a double and three RBI. Junior infielder Allison Dell’Orto recorded two hits and freshman infielder Sela Scheinman recorded an RBI on a sacrifice fly to power the Bombers to a win in game one.

Junior pitcher Riley Piromalli set the tone early for the Bombers by striking out the side in the top of the first inning. The Bombers also got on the bases early as graduate student outfielder Emma Kindblom earned a leadoff walk. Loffredo tripled to right-center field bringing Kindblom home and scoring herself on an errant throw to third for a 2–0 lead in the bottom of the first inning.

The Tigers put runners on second and third with one out to begin the top of the second inning, but Piromalli added another strikeout and the defense helped to get out of the inning. The Bombers continued to hit the ball hard, but right at outfielders for a quick second inning.

RIT got back in the game in the third inning getting runners to first and third on two singles and a fielder’s choice. With two outs, the Tigers got a one-run single to make it a 2–1 ballgame. Piromalli struck out her fifth and sixth batters during the inning.

Kindblom led off the bottom of the third with a double down the third baseline. Dell’Orto followed up with an infield single, beating the throw to first base. Scheinman roped a line drive, but the Tigers’ third baseman made a good catch and doubled-up Dell’Orto at first base to end the inning.

The Tigers tied the game at 2–2 with a double to right-center field scoring a runner from first. Kindblom got the ball in quickly to junior infielder Tava Kasper who made the relay throw to third to get the runner out to end the inning.

Piromalli got the Tigers out in order, adding two more strikeouts in the top of the fifth inning and striking out the side again in the sixth inning.

Dell’Orto led off the bottom of the sixth inning by singling and then stealing second base. Loffredo doubled to get runners to second and third with no outs. Scheinman followed with a sacrifice fly to left field, scoring Dell’Orto and then Loffredo as the ball got past the catcher on the throw for a 4–2 Bombers lead.

The Tigers got runners on first and second in the next inning, but Piromalli closed out the seventh, getting her fourteenth strikeout and earning her seventh win of the season.

Freshman pitcher Anna Cornell kicked off game two by throwing a 1-2-3 inning in the top of the first. The Bombers jumped on RIT early on as Kindblom was hit by a pitch and Loffredo crushed a two-run home run to get an early 2–0 lead. Scheinman then walked and stole second base, setting up an RBI double from freshman catcher Yalina Ellis.

Loffredo and Scheinman led off the bottom of the third with back-to-back singles, advancing Loffredo to third. But the Tigers got a quick two outs after junior outfielder Kailey Collins lined out to the pitcher and Scheinman was doubled up at first. Ellis came up to the plate and got her second RBI double, extending the Bombers’ lead to 4–0.

Senior outfielder Daniella Mulvey led off the bottom of the fourth with a double to left-center field. Sophomore outfielder Belle De Oliveira laid down a great bunt, but Mulvey was caught in a rundown and was thrown out at home. Kindblom hit a sacrifice fly to right field, scoring De Oliveira from third to make it a 5–0 game.

The Tigers got a two-out rally going in the fifth inning, loading the bases on a single, a walk and an error. Cornell forced a ground ball to first base for the final out, getting out of the inning.

The Bombers scored three runs in the bottom of the fifth to reach the mercy rule. Ellis earned her third RBI on a sacrifice fly, scoring Scheinman from third. Kasper came up to the plate next with two outs and crushed a home run over the left-field wall. Mulvey followed up with a triple down the right field line and then scored on a passed ball in the next at-bat to bring the game to a close.

Cornell earned her tenth win of the season allowing only two hits over five innings. Loffredo had two RBI on two hits and Ellis had three RBI on two hits. Mulvey also added two hits for the Bombers as they dominated game two.

The Bombers earned the sweep over RIT bringing their season record to 19–13 and their Liberty League record to 11-1. The Bombers will travel to the University of Rochester Saturday, April 30 for a doubleheader against the leaders of the Liberty League.