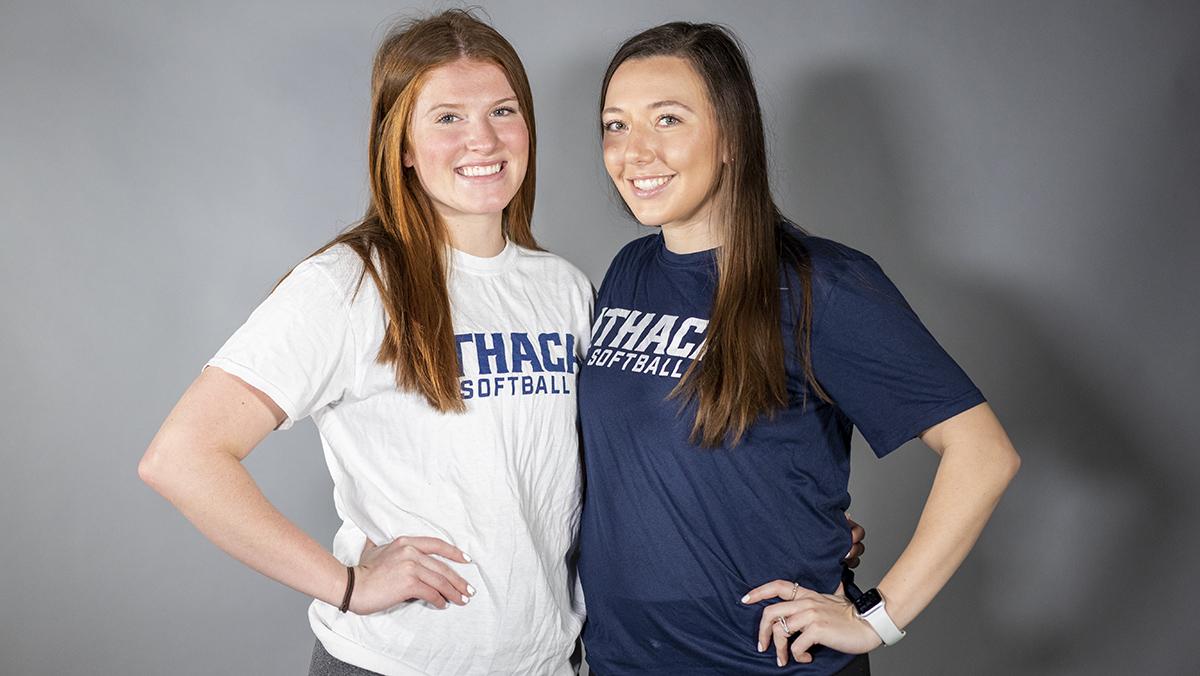 For the Ithaca College softball team, this season will be about rebuilding a culture. After losing 6–1 to the University of Rochester in the Liberty League Championship and graduating multiple starters, the Bombers will need to come together as a team to compete for a title.

This season will look much different than the 2021 season for the Bombers, which graduated seven players, including pitcher Beth Fleming ’21. The team will also have nine freshman players competing for their first collegiate action. Head coach Hannah Quintana knows this season will be a challenge and recognizes the importance of becoming closer as a team this year.

“We’re really just working on creating a solid team culture and really identifying what [the team] is going to hang their hat on,” Quintana said. “With so much turnover from last year’s graduating class and so many new players, I think we’re really just trying to identify what our team is going to look like.”

Quintana and junior pitcher Riley Piromalli said they are thrilled about the freshman class, many of which will compete for at-bats this season. The nine freshmen include three pitchers — Anna Cornell, Melody Kappel and Bella Scolaro — and catcher Lina Ellis who Quintana said will serve important roles this season.

“We have three first-year pitchers, which is very exciting [for us], and they’re extremely driven,” Quintana said. “I think that’s really dynamic for us.”

Piromalli nearly split the workload on the mound with Fleming last season, throwing 95.0 innings, 75 strikeouts and posting a 2.14 earned run average for the season. Piromalli is stepping up this season to lead the club’s young pitching staff and said she has taken the rookie pitchers under her wing to prepare them for the season.

“Our pitchers are amazing this year,” Piromalli said. “And allowing our freshman pitchers to know they can count on me for anything is a really key factor to our pitching staff.”

Quintana said the Bombers will also need to rely on the leadership and experience of returning players. The coach said maintaining continuity between the team’s ace and catcher will play a key role for the squad this spring.

“To bring back to the battery combination of Riley Piromalli and [senior catcher] Kira Flegenheimer is a huge advantage for us,” Quintana said. “They have a lot of experience. They are both very competitive and excellent at their positions.”

Quintana also said senior Julia Loffredo, outfielder and catcher, is an ‘anchor’ to the infield. Loffredo started all 33 games last season for the Bombers, logging a .333 batting average, 32 hits and 34 runs batted in. She was also named to the 2021 Liberty League First Team and a 2021 Liberty League All-Academic. Loffredo said the team is focused on themselves and what it needs to do in order to compete in another championship.

“Every year, every team in the Liberty League comes out and plays hard,” Loffredo said. “We’re focusing on our personal goals, our journey, our track to beat whoever it is in the other dugout.”

Loffredo is also a player who will be an important leader for the Bombers’ lineup, and she wants to lead by example for the younger players.

“I’m a team-first type of person, and that’s what we’re pushing for this year,” Loffredo said. “I’m going out, grinding every single day, showing off my knowledge to the younger girls to help them once [the older players] graduate.”

The Bombers are working hard as the beginning of the season gets closer, training five days a week, getting 5 a.m. workouts in and having classroom sessions where they review plays and discuss strategies. Loffredo said the team is highly motivated this offseason for its return to the diamond.

“We’re all balling out and working hard,” Loffredo said. “We’re definitely putting in the extra work and the extra hours that are more than required of us and we’re just really excited.”

The Bombers fell just short to the University of Rochester in the Liberty League Championships last season, ultimately ending the season earlier than they had hoped. The Bombers return to the diamond this year with the goal of winning the championship this time around.

Quintana said she recalled watching the NCAA softball championships, feeling uneasy knowing her team had the chance to be there. The Yellow Jackets, which the Bombers split the regular-season series 2–2, would go on a big run in the NCAA tournament.

“That was heart-wrenching to know we could have competed at the same level,” Quintana said.

“We definitely reached a lot of goals last year, coming back from [the cancellation of] last season, getting a winning season and to a championship,” Loffredo said. “This year, we really want that championship game back again and we want to go to a World Series.”

The team looks to continue its winning play this season and return to another Liberty League Championship. Loffredo and Piromalli both said the team believes it can make a run in the NCAA tournament.

“Our team faced a lot of challenges and obstacles last year,” Piromalli said. “This year’s team is really focused and dedicated to taking it very far this year. Our team has great camaraderie and there are lots of key players that want to win.”

The Bombers are set to open the 2022 campaign in a doubleheader beginning at 1 p.m. March 5 at the University of Scranton in Scranton, Pennsylvania.