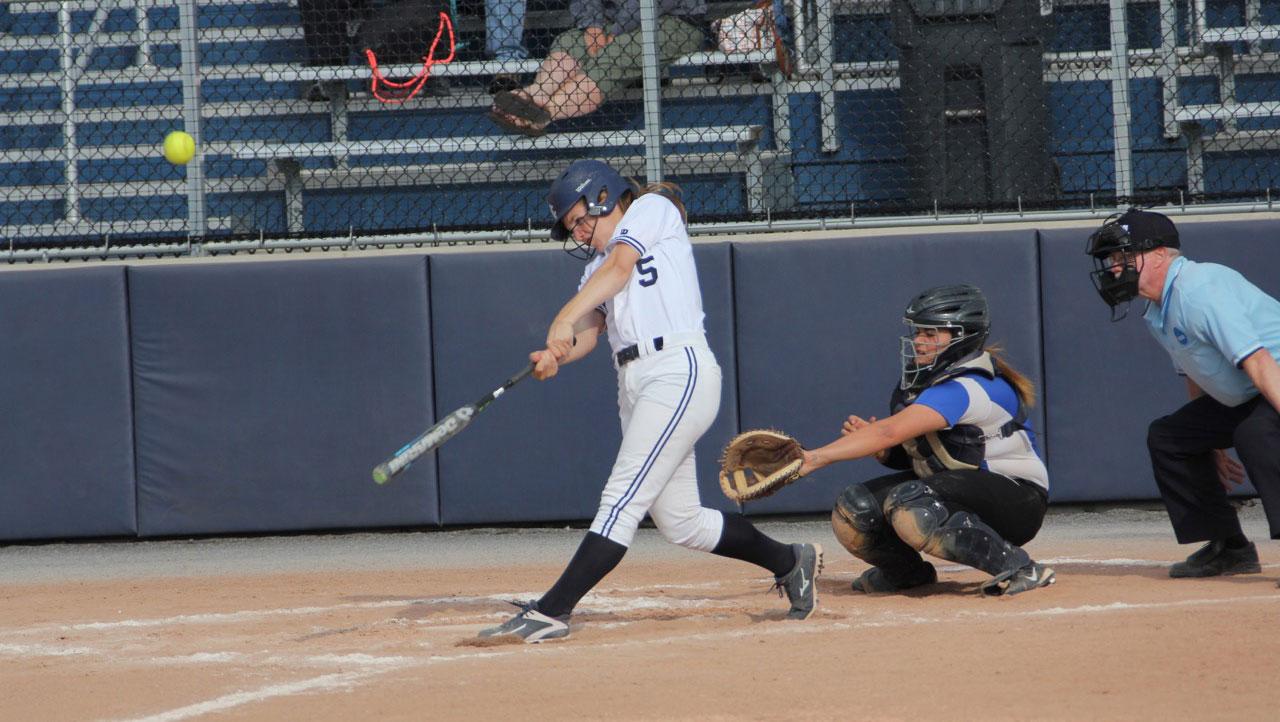 CAITIE IHRIG/THE ITHACAN
Freshman Hannah Anderson started at shortstop in the Bombers win over Mount Saint Mary at Kostrinsky field on May 13.
By Adam Brobst — Staff Writer
Published: May 14, 2016

The Ithaca College softball team won its first game of the NCAA Championship in style with a 1–0 victory against Mount Saint Mary College.

Senior catcher Kelly Robichaud would be the first Bomber to reach base after a single sneaked past the Knight’s third baseman in the bottom of the second inning. Two singles by senior first baseman Casey Gavin and freshman designated hitter Alex Wright put the bases loaded with no outs, but the Bombers fell short and were unable to score any runs.

It would remain scoreless through the fourth as neither team had much success getting on base. The Bombers had totaled four hits going into the bottom of the fourth.

In the bottom of the fourth, a single by senior centerfielder Erin McQuillan put Wright in scoring position with one out. The Bombers were unable to score on this opportunity, as freshman shortstop Hannah Anderson struck out for the second out. Junior right fielder Jessie Fleck loaded the bases with a hit by pitch, but sophomore left fielder Allie Colleran popped out to second base to end the inning.

In the fifth, freshman third baseman Vanessa Brown got on third with a triple to right field on one out. However, Knights sophomore pitcher Cindy Connoly would go on to retire the next two batters to end the inning.

In the sixth, Wright knocked a double into left field. McQuillan hit a sacrifice bunt to move Wright to third. Freshman Ellie Murray came in as a pinch hitter to try and bring Wright home. However, Murray didn’t have to, as Wright would steal home as a pitch from Connoly rolled between the catcher’s legs, giving the Bombers the loan score of the game.

Wright said she was looking to get some power in her final at bat.

“I was lead off of that inning. I was just looking to get on base … trying to start like a rally or something,” Wright said. “They had been throwing me outside all game, so I just wanted to play the outside. It’s not my favorite pitch, so I just went with it.”

Mount Saint Mary failed in their final attempt of the game to score. The Bombers picked up their first win in the first round of the the NCAA Championship.

Senior starting pitcher Laura Quicker would pitch the entirety of the shut out, striking out six batters and allowing only two hits. Head coach Deb Pallozzi said Quicker had a huge impact.

“She won the game for us,” Pallozzi said.

Quicker said she put in plenty of work in the pregame that then transitioned into success on the field.

“Warming up, I really worked on my curve a lot and being confident at just hitting those spots,” Quicker said.

The Bombers next game is against Moravian College, who is 36–4 on the season, which will be played at 10 a.m. May 14 at Kostrinsky Field.