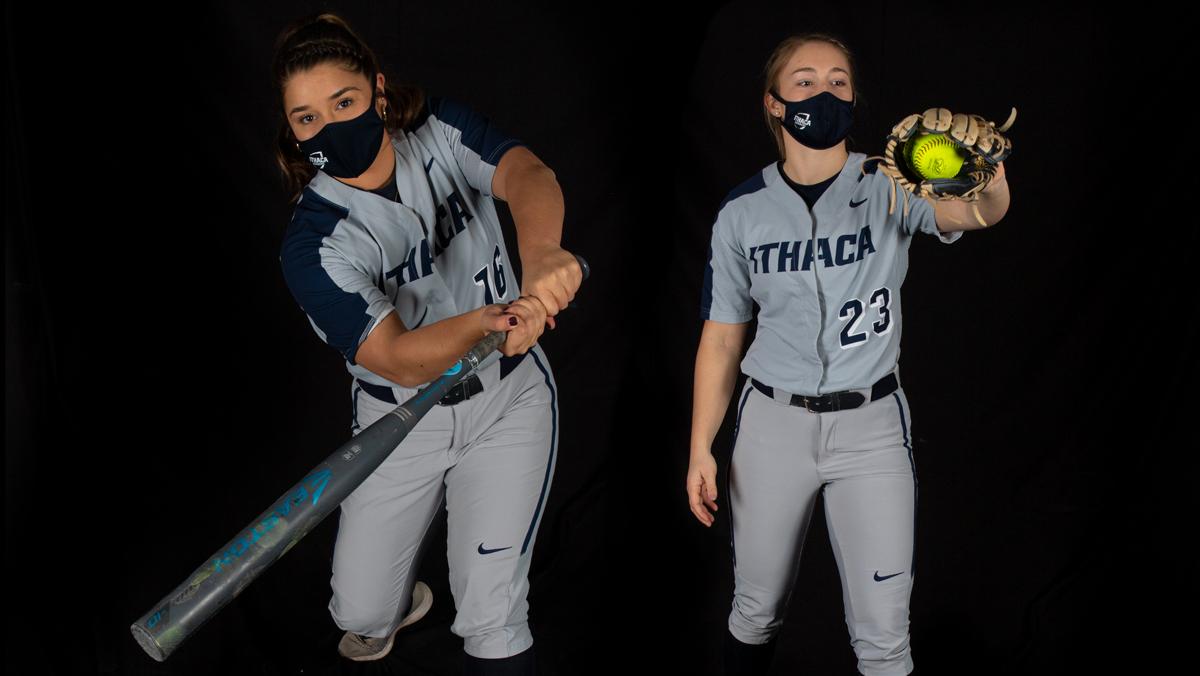 Mikayla Elwell/The Ithacan
From left, seniors Haley White and Beth Fleming will contribute at the plate and on the mound for the Bombers success this season.
By Connor Wood — Staff writer
Published: March 25, 2021

On March 1, 2021, when the Liberty League announced there would be spring competition at Ithaca College, seniors Beth Fleming and Haley White could not contain their excitement. After playing just eight games in the 2020 regular season, the Bombers softball team was ready to get back to Kostrinsky Field.

“You remember where you were when you get some news, and our whole house erupted,” White said. “All the seniors live together, so we were just so excited, yelling on every side of the house. It echoed everywhere.”

As they return to the field, they are led by a former Bomber, head coach Hannah Quintana ’07. She became the fifth coach in program history during summer 2019 before the season was canceled.

“Telling our team last year that we had no season was one of the low points I think I’ll ever have as a coach,” Quintana said. “I’m excited they are able to have this season. They’re a fantastic group of women. They embody everything that softball is about, and I think they are ready to capitalize on this opportunity and are just excited to have a chance.”

As Quintana leads this year’s team onto the field, she said her goals are to keep her players safe and leave the dugout as national champions.The Division III Championships Committee announced March 16 that the NCAA will conduct spring athletic national championships due to the high rates of participation from member institutions.

“We obviously have to focus on the world we’re living in right now, so the health and safety of our student–athletes is a big goal,” Quintana said. “Strictly from an athletic standpoint, we’re competing for a national championship. It seems as if spring championships will be offered by the NCAA, and becoming national champions has been a long-standing goal of the program. I feel like our group is able to compete at that level this year.”

White said she plans to have fun with her teammates during her final season as a Bomber.

“My goal of my senior year is to make sure that I’m having a great time and not taking things too seriously, while still staying competitive,” White said. “I believe we can win a national championship because of the motivation of our team. We have the skills, and if we can all be at 100% at the same time, there is no doubt in my mind we can win the championship.”

Quintana said that although the Liberty League did not put out its announcement until March 1, the team has been preparing for a season since they returned to the South Hill in January.

“It was a relief that we had the official word,” Quintana said. “We’ve been operating under that assumption for a little while now, which has made practice a little bit more competitive and given us a real sense of purpose and goals.”

The Bombers will only face three teams outside of the Liberty League: Elmira College, St. John Fisher College and SUNY Cortland. Clarkson University and the University of Rochester are expected to be competitive with the college within the conference. The Bombers went into overtime with both schools in the 2019 Liberty League Championships.

Quintana said she wants to bring power to the plate with strong hitting this season. On the defensive end, Quintana plans to have hard–throwing pitchers, specifically sophomore Riley Piromalli and Fleming, on the mound.

“We’re going to be a power offense,” Quintana said. “We’re going to put the ball out of the ballpark. We believe in hitting the ball hard, and I think you’ll see that reflected in some of our power numbers.”

Quintana said the team will need to improve its defense throughout the season after being unable to be outside on a field for a full calendar year.

“Our defense is going to take a minute to adjust to [being outside] and play together,” Quintana said. “We have a lot of veterans in the infield, but veterans who have not gotten to play a ton of time together.”

White said that despite the team having to train separately this offseason, the players still found ways to maintain a competitive culture and engage with their teammates by having virtual challenges and workouts.

“I think we’re an extremely competitive team no matter what the topic is, so taking the competitive nature into our training, it showed the underclassmen how much we wanted to win even in the challenges we had over the summer,” White said. “Getting these workouts and challenges over the summer brought our team closer and helped us get to know the freshmen more.”

Fleming and White look toward their final seasons as Bombers along with fellow seniors Gabby Laccona, Kaitlin Maniscalco and Samantha Troetti and first-year graduate students Haley Gaffney and Frankie-Ann McCauley. Looking back on her four years at the college, Fleming said she found a family within the softball program.

“I know that I have lifelong friendships, not only with my class but every Bomber is going to be there for each other, and I think that is something I can be proud of,” Fleming said. “We fought through and are going to have a season, so let’s make the most of it.”