Sophomore forward returns to squad after being cut freshman year 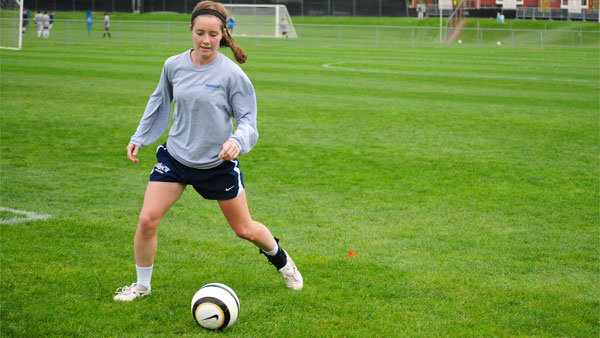 Rene Manecton/The Ithacan
Sophomore forward Sarah Woychick dribbles the ball during practice Monday afternoon on the Upper Terrace Fields. Woychick was cut from the team as a freshman, but made it this year.
By Kristen Gowdy — Staff Writer
Published: September 17, 2013

On the final day of the 2012 women’s soccer preseason, 10 freshmen waited to find out if they would make the team. Nearly two weeks of grueling preseason workouts in a sweltering August in Ithaca came down to the final roster decision.

When head coach Mindy Quigg posted the final roster, seven freshmen breathed a sigh of relief as they found their names. Three, however, were not listed on the paper, including then-freshman Sarah Woychick.

Woychick was among the last players cut from the 2012 squad, but has returned to the team for her sophomore season. She made her first appearance in a Bomber uniform in the squad’s first game against Kean University, playing more 20 minutes in her debut and helping the Blue and Gold record the 1–0 win.

Cut for the first time in her soccer career during her freshman year, Woychick said she had a hard time dealing with the fact that she didn’t make the team.

“When I got cut, I wanted to trick myself into thinking that I didn’t really want to play soccer,” Woychick said. “I went through a phase of figuring out what I wanted to do. It was really tough mentally, because I had been preparing all summer, and my senior year of high school I had been planning on going in and playing soccer at Ithaca.”

Disappointed but still determined to play soccer, Woychick played for the club soccer team at Ithaca College. She said playing forward for the club team helped her stay in physical shape.

However, she said keeping a positive mindset was the most difficult part of not making the team.

“After getting cut, I was really down on myself,” Woychick said. “I kept thinking that I wasn’t good enough. I worked on staying positive and keeping my mental game.”

Woychick said she found herself enjoying club soccer and wasn’t thinking about trying out again for the varsity team. That changed when Quigg approached her before the spring season and encouraged her to try out for the team again.

According to Quigg, Woychick was on the verge of making the team last year but had not played her best at tryouts. Quigg said because she possesses certain skills, Woychick was a strong candidate to make the final cuts during her sophomore season.

“I wanted to give her another opportunity to come play, because I know she loves the game,” Quigg said. “She’s very crafty with the ball and uses her body well. Technically, she is very sound. Those things make her a very dangerous player.”

Woychick said her interactions with Quigg during the off-season made her realize that she wanted to try out again. She rejoined the team for its spring season, which involved conditioning, weightlifting and soccer workouts. According to Woychick, these workouts helped improve her speed.

After working out with the team in the spring and conditioning over the summer, Woychick showed up for the preseason in position to try out for a forward spot on the team.

Senior forward Jackie Rodabaugh said Woychick’s improvement was noticeable during the preseason, which helped her to make the team.

“Even from the spring until now, we see improvement in her,” Rodabaugh said. “She’s really quick, and she has tight, quick touches that make her very dangerous. If a defender is on her then she can turn around them.”

When Quigg finalized the roster for this fall’s season Woychick’s name was on it. All of the hard work she had put in during the off-season had finally come full circle. Woychick said making the team felt like a testament to her effort and dedication during club soccer and the team’s spring season.

“My mindset during preseason was to just take it one day at a time,” she said. “So when I made the team, it was very rewarding.”

Though making the team was a huge achievement that involved hard work, Woychick said she wants to earn more playing time to better the team and help it win more games. Rodabaugh said Woychick’s speed helps the team when she is in the game.

“I don’t remember her specifically being so quick on the ball last year,” Rodabaugh said. “She makes a huge difference when she is in the game and is doing that.”

Now that she is a member of the varsity squad, Woychick said she believes her skills have improved to the point where she can be a contributing player on the field.

“It is crazy to look back at all of the stuff I had to do during the summer and to think about where I was last year compared to now,” she said. “I feel like I [am bringing] a totally different game this year.”