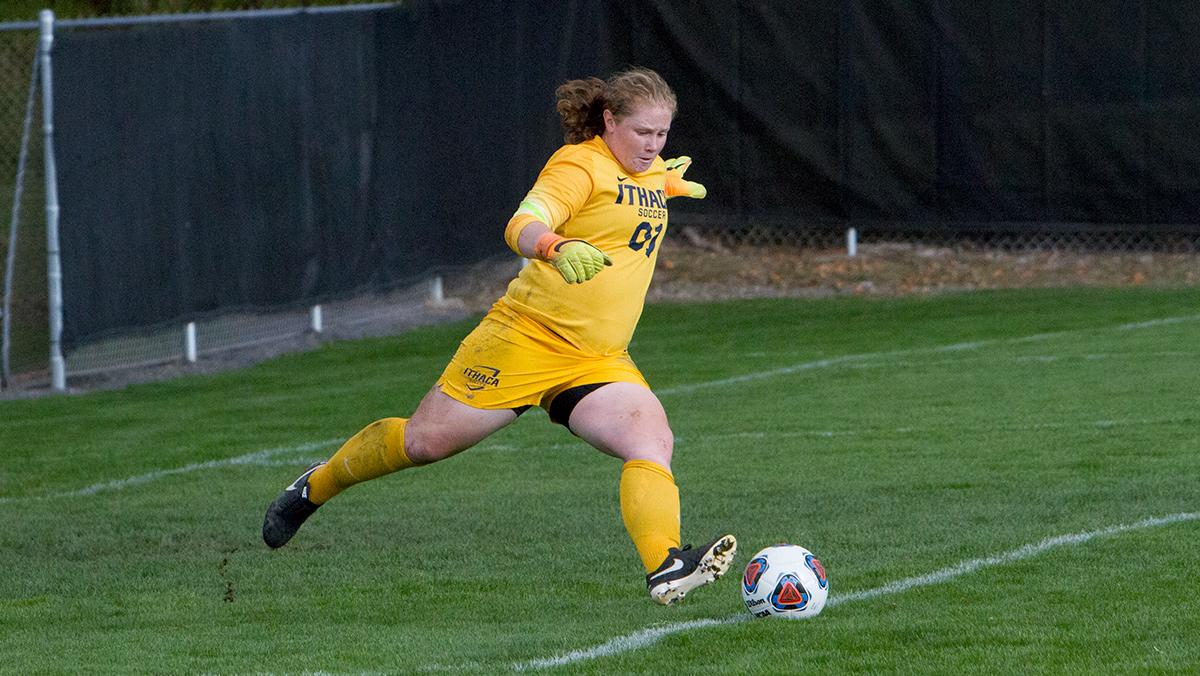 With a new soccer season comes a new starting roster and players who strive for a chance to make the starting 11. Sophomore goalkeeper Stacey DiGiorgio’s time in the net has come, as she is getting her first chance in a starting role this season.

DiGiorgio was a four-year captain for her high school’s team at Thomas R. Proctor High School in Utica, New York. She said she never had much competition for her starting position in high school.

Though she was not accustomed to the competition she found at the college level, DiGiorgio said she knew the value of hard work from the time she became a Bomber.

“Through last year, I was just working to get any kind of recognition and to get any sort of time on the field, and that didn’t come until later in the season,” she said. “I knew I just had to keep it up and show them that I’m here to work hard, train and play for the team, and do what’s best for the team.”

So far this season, DiGiorgio has started in 11 of the 12 games the team has played, and she played for the full game in seven of those appearances. She has also made 44 saves while giving up just eight goals. Her season high for saves came against SUNY Cortland on Sept. 17, when she stopped nine shots.

Last season, she embraced the role of a backup but was always working to be on par with Beth Coppolecchia ’16, the Bombers’ previous starting goalkeeper. DiGiorgio said Coppolecchia’s tutelage always pushed her to be her best.

“I always worked to be at the same level as Beth so that she wouldn’t be training down and we could both be at our best potential,” she said.

Coppolecchia was a three-time All-American goalkeeper with the Bombers and was named the NCAA Division III Goalkeeper of the year her sophomore year. With Coppolecchia’s departure, DiGiorgio had her eyes on the starting position. Though she eventually earned the spot, she said, now is not the time to coast along.

“There’s no set starting position as a goalkeeper,” she said. “Our senior or freshman backups could take my position at any time, so I just have to keep the intensity high and prove to the coaches that I want to be where I am and I want to be that starting goalkeeper.”

Junior defender Kendall Cirella said she trusts DiGiorgio as a goalie and as a leader.

“All of our goalies are phenomenal teammates,” Cirella said. “They work hard and are always supporting us. I think Stacey has really stepped into the leadership role that Beth left behind. She always has my back and everyone else’s; I just love playing in front of her.”

Despite her minimal game experience so far, assistant coach Jeff Long said DiGiorgio has been becoming a better player each day.

“We don’t expect her to be her best right now, but as the season goes on, we know that she’ll keep working hard and hopefully bring us to the Empire 8 and national tournaments, and it’ll just keep getting better and better from there,” Long said.

DiGiorgio said she is aware of the position she is filling as Coppolecchia’s replacement. She said she hopes to be the next in a line of All-American goalkeepers in the Bombers’ history.

“Filling in her shoes is an honor for me to follow her as All-American as well as the girl Beth replaced, Becca Salant, who was also an All-American,” DiGiorgio said. “I just want to make everyone proud and live up to their expectations.”