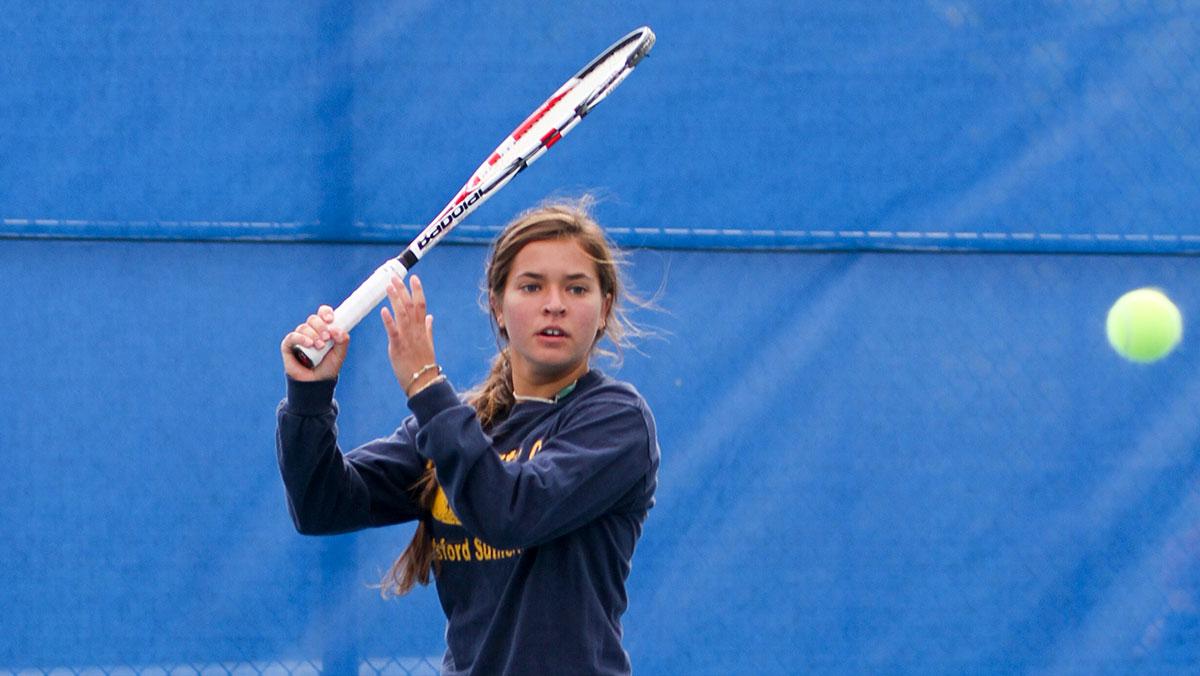 In 2013, then-freshman Haley Kusak had as good of a beginning to her collegiate tennis career as she could have hoped for. She was either the No. 1 or No. 2 seed in the women’s tennis team’s singles lineup and the only freshman to earn first-team All-Empire 8 honors for singles. Additionally, she made the Empire 8 second team for doubles with her then-sophomore partner Marni Blumenthal and finished the season with Empire 8 Rookie of the Year honors, an award she said she did not know existed until she was awarded with it.

One year later, Kusak is fixated as the No. 1 seed in the singles lineup and leading the Bombers, who are currently second in the Empire 8 with a record of 6–1.

Head coach Bill Austin said he selected the experienced sophomore for the leading position because of her strong and consistent play.

“She earned that spot. I didn’t give it to her,” Austin said. “The way collegiate tennis works is that you put your best players first, and she’s earned that spot at the top of the lineup.”

While she may exhibit dedication and drive now, her tennis career didn’t begin that way. Kusak said her play was incentive-based. When Kusak was 8 years old, her sister Dana began playing tennis and, out of a desire to best her sister, Kusak took up the sport as well.

“We were always really competitive, and when she started playing tennis I started playing so that I could be better than her at it,” Kusak said. “Also, my dad would buy us ice cream after we played, so I would use tennis as a means to get ice cream when I was a kid.”

Once Dana stopped playing, Kusak realized she actually enjoyed tennis and had a talent for it. Thus began the passion that got her to where she is now. Kusak became so skilled that she played five years of high school varsity tennis, beginning when she was in eighth grade.

In the team’s seven matches so far this season, Kusak has won all but one of her Empire 8 singles matches and has not dropped a set in any of her wins. She has also won all of her doubles matches alongside her partner, senior Carly Siegel, who said their relationship on the court is the key to their success.

“We just have really great chemistry, and we know what to say to each other when one of us makes a mistake or gets down,” Siegel said.

Kusak’s success was highlighted in the team’s match against Nazareth College on Sept. 13, where she won her singles match 6–0, 6–0 against Nazareth sophomore Jean McCarthy, and she and Siegel won their doubles match 8–0. This performance, along with another stellar performance against Elmira College on Sept. 10, led to Kusak being awarded the Empire 8 Player of the Week on Sept. 16. Kusak said it was refreshing to be the one winning the award instead of just hearing about other people winning it.

“Winning Athlete of the Week made me feel like all of my hard work had paid off, and it gives you a boost to the week knowing that your hard work was recognized,” she said.

Austin said Kusak’s work ethic allows her to remain at a level where she is prepared to take on the best players in the conference.

“She loves to compete and she’s willing to put in the work to accomplish that,” Austin said. “She knows she’s going to take on the opposing school’s best tennis player every match, and she understands that she’s never getting a freebie, and she puts in the work outside of practice necessary to hang with those players day in and day out.”

Austin said his No. 1 player is still improving and has not yet reached her full potential.

“She has so much room to grow,” Austin said. “She can still get a lot better, and experience is a great teacher, so the more she plays and the more she competes the more she’s going to learn.”

While she has already reached the top of the college’s tennis hierarchy, she said she still has objectives to achieve before her collegiate tennis career is over.

“My goal for the team, and everybody else’s goal for the team, is to win the Empire 8 and make it to nationals every year,” Kusak said.  “For me personally, though, when we go play in tournaments outside of the conference, the level of competition is so much higher, and I never make it past the second round. I just want to make it past that point and win one at some point.”