Bombers’ sophomore third baseman steps up to the plate 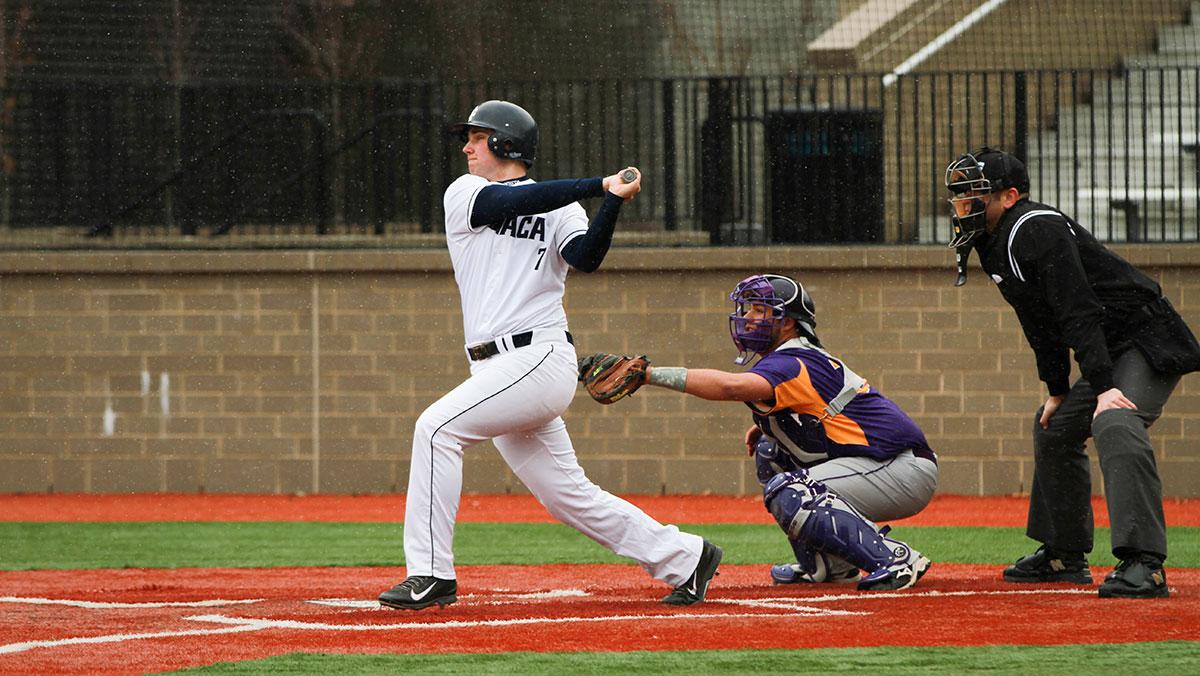 Yana Mazurkevich/The Ithacan
Sophomore third baseman Trevor Thompson follows through on his swing after singling to third base in the team’s 13–0 shutout over Elmira College on March 31. Thompson posts a .378 batting average.
By Andrew Sullivan — Staff Writer
Published: March 31, 2015

Entering the 2015 season, the baseball team needed a source of power in its lineup, and 10 games into the year, sophomore third baseman Trevor Thompson has become that offensive threat. Though the team has struggled out of the gate, posting a 3–7 record thus far, Thompson has been a bright spot in the lineup for the Bombers.

Over the 10-game stretch, Thompson has 14 hits in 37 at bats, hitting .378 with four runs batted in and five runs scored.

Junior shortstop Stephen Yanchus said Thompson is the most talented player on the team’s roster.

“He has improved tremendously from last year,” Yanchus said. “He has stepped right into the starting role like everyone knew he would, and he hit really well out in California. I’m assuming he is going to do that for the rest of the year.”

Last season, Thompson played a backup role at third base and still performed exceptionally, hitting .316 with a home run and five RBIs over the course of 15 games in 2014.

Thompson said one of the biggest contributions to his success this season thus far has been working with hitting coach Frank Fazio to tweak his swing.

“Approach is my biggest thing — getting pitches I can hit,” he said. “I’m an aggressive hitter, I tend to swing early in the count [and] swing at pitches that are not as good. He has been making me see pitches.”

The process of becoming a more patient hitter has paid dividends in Thompson’s game as he and senior right fielder Christian Brown are tied for the team lead in walks with five apiece.

Despite Thompson’s scalding start to the season, Fazio still wants to tinker with the sophomore’s approach in the batter’s box.

“He is hitting pretty good right now,” Fazio said. “I still think I’m going to change his swing because I think he can get better.”

Thompson isn’t the first third baseman to put up such big numbers at the plate for the Blue and Gold, however. Last season’s starting third baseman, Colby Gee ’14, was the squad’s main offensive threat as he clubbed four homers with a batting average of .369 and 33 RBIs.

Thompson has picked up right where Gee left off and has seemingly filled the void in the middle of the order in 2015. He said Gee was instrumental in mentoring him at the position.

“He was a really big influence on me,” Thompson said. “Showing me the ropes and making sure that I knew what my role was.”

Thompson’s coaches and teammates draw comparisons between him and Gee. Both Thompson and Gee are right-handed third basemen, both are around 6 feet tall and weigh 210 pounds. But most importantly, both have the knack for hitting with authority, so much so that last season Thompson’s teammates dubbed him “Little Colby.”

Fazio works the closest with Thompson out of all the coaches on staff and said he absolutely sees the similarities between the two.

“Trevor and [Gee] are very much alike,” he said. “I think he is going to fit right in where Colby left off and we are not going to miss a beat. The two of them are so much alike they could be brothers. I feel that Trevor should do as well as Colby if not better.”

Despite these comparisons, Thompson said he never felt any outside pressure heading into this season. However, he said he does put a ton of pressure on himself on a game-by-game basis.

“I’ve had a hard time learning — as every young athlete does — how to cope with the pressure,” he said. “[One] big thing for me is focusing on the next play … I always think in my mind … ‘I’m one-for-five right now, let’s be two-for-six.’ Every player has pressure they put on themselves, but I don’t see it as pressure from everybody else … I know I’m good enough to play at a high level.”

Fazio said he has higher hopes for the sophomore slugger by his senior season, however.

“I’m hoping he is not with us,” Fazio said. “I’m hoping that he is so good that he gets drafted.”

As for Thompson himself, he said he dreams of being a part of a professional baseball club, but not as a player. The athletic training major said he isn’t relying too heavily on his chances of playing at the next level after graduation.

“My dream job is to be the head trainer for the [New York] Yankees,” Thompson said, “Maybe I’ll get drafted. I’m not putting all my marbles in that basket … We’ll cross that bridge when it comes.”