Sophomores step up on women’s swimming and diving team 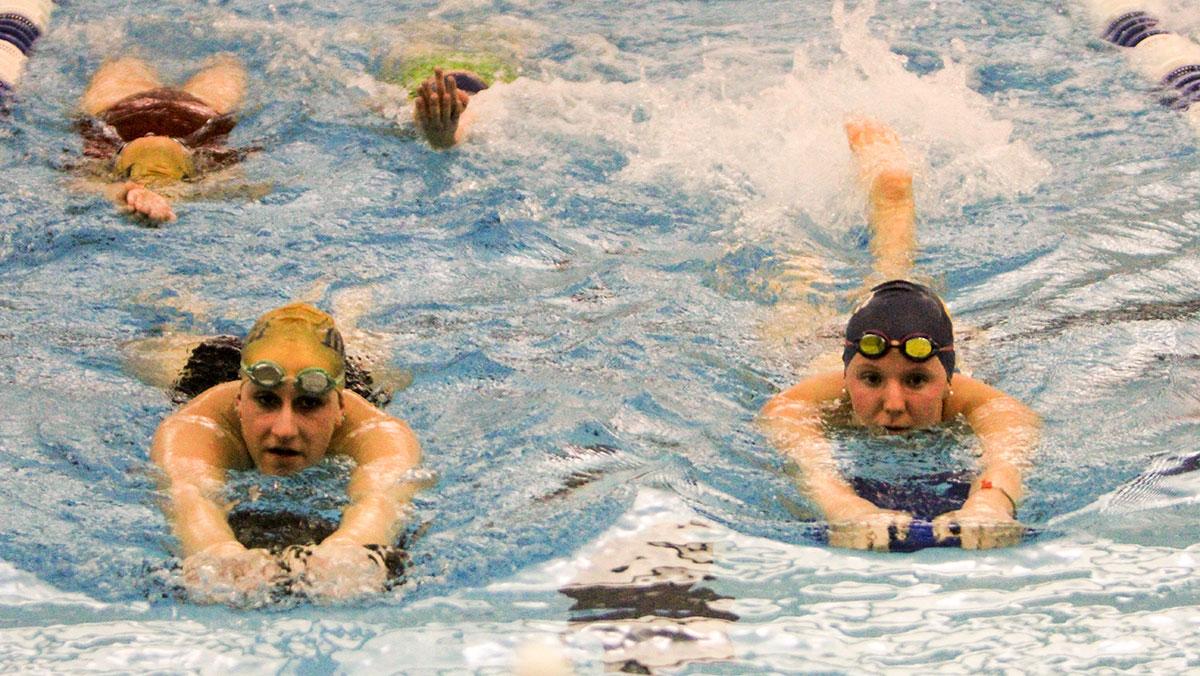 After finishing the 2013–14 season undefeated and placing 30th overall at NCAAs, the women’s swimming and diving team had much to celebrate. The team started off the season with 21 new swimmers, who ended up being one of the most vital pieces to the Bombers’ puzzle of success.

Sophomore Grace Ayer led last year’s freshman class, finishing her standout season as a four-time Empire 8 champion, with four state championship titles, seven state honors and a 13th-place finish at NCAAs in the 200 individual medley. She was named the E8 swimmer of the state meet, the Empire 8 co-swimmer of the year and received All-American honors — but there’s more to the success of the sophomore class than just Ayer.

Ayer is one of 17 second-year swimmers on the Blue and Gold’s women’s swimming and diving team this season. Comprising almost half of the team’s total 39 members, the sophomore class has played an important role in the team’s success in the pool since coming to school in the fall of 2013.

Senior captain Kylie Bangs said having such a large class last season was intimidating, but said once introductions were out of the way, she saw more camaraderie among her teammates.

“They came in last year and, honestly, it was a little overwhelming,” she said. “It was harder than other years because everyone is a little timid when it comes to getting to know each other at first, and with such a big class it was a new experience for all of the girls, even the ones who had been on the team before. But this year, everything just feels much more cohesive.”

Since the athletes are only in their second season of their collegiate careers, head coach Paula Miller said many of the sophomores still have room to learn and grow as many step up into new positions that opened up in the lineup due to graduation.

Miller said because of the class’ size and personality, they could have had a much different impact on the team if they chose to do so.

“They came in and they were all able to adjust and adapt really well to fit the team and what we needed last season,” she said. “They could have easily come in and dominated but they didn’t. They really bought into the program, which has made so many of them even more important this season.”

Despite Miller’s claim, the then-freshman class played a huge role in the 2013–14 season for the Blue and Gold. Six of the 17 sophomores on the roster this winter had the opportunity to make Empire 8 and State meet appearances in both individual and relay events last season. Each of these six swimmers received multiple All-State honors or recognitions, and four received Empire 8 titles.

Sophomore Lake Duffy, who is the Bombers’ number-one sprinter this winter after receiving five All-Empire 8 honors and five All-State recognitions, as well as an Empire 8 title in the 50-yard freestyle last season, said the most drastic change for her is being able to take what she learned last year and apply it to what she does in the pool this season.

Sophomore Erin Hackett, who was a conference and state champion after placing first in the 800-yard freestyle relay last season, said being a part of the largest class on the team has impacted the relationship she has with her fellow sophomore teammates.

“[It has been] interesting in that with the juniors there are six of them, and they all live in a Circle together,” she said. “But with us, there are 20 of us, so going out to dinner together is hard. But that doesn’t make us any less close — we all love each other so much and we’ve been through so much together over the past two years.”

However, Bangs said the size of the sophomore class hasn’t mattered to her since she got to know her new teammates last year.

“When we’re in the pool, we don’t think of them as ‘the sophomores,’” Bangs said. “Unless we’re doing a set that’s, like, the upperclassmen against the underclassmen, your year doesn’t matter that much. Once we get in the pool, it’s all about the team.”