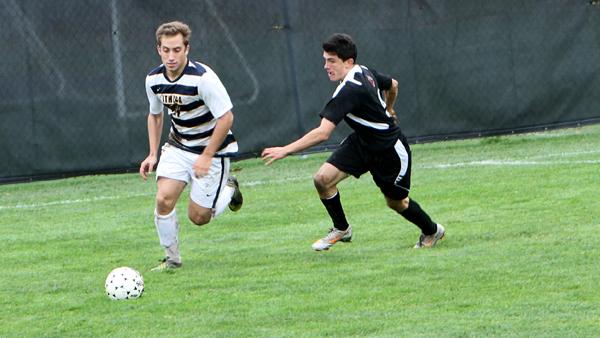 After finishing the regular season with a winning record for the first time since 2009, the men’s soccer team is hoping to take the next step in this year’s Empire 8 Conference tournament.

The Bombers finished third in the Empire 8 with a 3–2–1 record behind Stevens Institute of Technology and St. John Fisher College. Elmira College rounds out the qualifying teams in the fourth slot. The Bombers will face the Fisher Cardinals in the semifinal match Friday in Rochester, N.Y.

The last time these two teams played each other was on Sept. 15 in Rochester, and the result was a 1-1 draw. Senior back Ryan Norland is confident the Bombers can beat the Cardinals this time around.

“We know what their strengths and weaknesses are,” Norland said. “We should have beat them when we [first] played them.”

The Blue and Gold were still in danger of missing the postseason tournament until Oct. 20, when they stepped onto Carp Wood Field to face Empire 8 Conference opponent Nazareth College.

The Bombers had dropped their first Empire 8 game a week earlier against Utica College, and the team was not ready to lose again. If the South Hill squad had any hope of qualifying for the conference tournament, they had to win this game.

After 90 minutes of aggressive and physical play, the Blue and Gold were victorious, beating the Golden Flyers 2-0 and clinching a spot in the tournament for the second year in a row.

Last year, the South Hill squad qualified for the postseason tournament for the first time since 2008. After traveling to Hoboken, N.J., the Blue and Gold fell 2-1 to Stevens in an Empire 8 semifinal match. The Ducks would go on to win their fifth straight tournament crown and advanced to the Elite 8 of the NCAA Division III Tournament.

Senior back Jack Shirley said the prospect of falling short of the championship game again will provide extra motivation for the team in practice as they prepare for postseason.

“It’s do or die; that’s the bottom line,” Shirley said. “We have a full week of practice, which makes a huge difference. Fisher’s a tough team, and we’re looking forward to getting another crack at them, because I think we let them slip away from us last time.”

The Bombers are planning for both their opponent and the elements. St. John Fisher plays on turf while the South Hill squad plays on grass on Carp Wood Field. Sophomore midfielder Casey Williamson said the team will practice at Higgins Stadium to help the team transition to the different playing surface.

“That’s a much faster game — it’s a lot faster than when we play on [Carp Wood],” Williamson said. “We kind of have the longer grass, so we have to make an adjustment. They’re a turf team, but hopefully after this week we’ll be a turf team, too.”

The seniors have been instilling a hard work ethic into the team throughout the season, and the team will only increase their intensity. Norland said as the 2012 campaign begins to come to a close, he has been stressing to the underclassmen to step up and be leaders now rather than waiting until next year.

“At the beginning of the [Stevens] game, I told the team [the seniors] were passing the torch,” Norland said. “A lot of the times, when the season is over it’s like, ‘OK, next squad take over,’ but I really want the sophomores and the freshmen to start taking over now.”

The Bombers will have plenty of time to prepare for the semifinal matchup. Williamson said the team’s attitude is positive and intense as every player is aware of the stakes at risk.