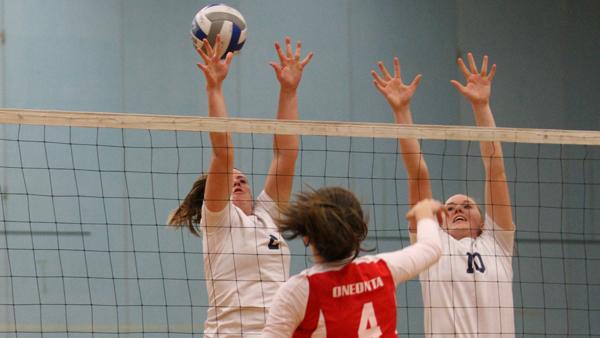 Despite several bumps in the road that could have derailed its season, the volleyball team has kept its hopes alive for an Empire 8 Conference title.

The Bombers have endured several losing streaks, inexperience at some key positions in the starting rotation and a concussion suffered by sophomore middle blocker Brittany Pietrzykowski that will likely keep her off the court for the rest of the season. However, the Blue and Gold were able to string together three consecutive victories against Empire 8 opponents to pull above the .500 mark and earn a bid to the Empire 8 Conference tournament Nov. 3-4.

Head Coach Janet Donovan said one of the reasons for the Bombers’ poor start was their inconsistency and streaky play. Over the course of their first 21 matches, the Blue and Gold put together a winning streak of three matches or more only once, when they won their first three matches in the season-opening Bomber Invitational.

Donovan said she even noticed this uneven play affecting the team’s mindset within the actual matches themselves.

“Our biggest problem is rebounding from [losses],” Donovan said. “When we start out well, we seem to maintain that, and when things start not to go well, we have trouble rebounding and getting back into our game.”

Senior Marissa Weil, outside hitter and team co-captain, said the Bombers also have a tendency to dwell too much on their mistakes and become distracted when trailing.

“When we get down, we lose focus,” Weil said. “If we miss something, we need to just bounce back, and I think we kind of hold onto it, and we lose the focus, and then we let it take over so we tense up and get negative instead of just letting things go and then progressing and making it better.”

Junior co-captain Syline Kim said the Bombers also have to maintain a higher level of energy throughout their play.

“Our goal is mainly just to start out strong, bring the intensity to the game and always be at a high level of energy,” Kim said.

On a more personal level, the Bombers were also hit hard by the loss of Pietrzykowski, who went down with a concussion in the team’s third game of the season and has taken longer than expected to recover. Weil said Pietrzykowski’s absence has particularly affected Kim, who’s had to spend a lot more time as a middle blocker instead of her usual right side hitter position.

“It’s been really difficult, but she’s took it on really aggressively and tried her hardest,” Weil said. “We all just have to adjust.”

That’s exactly what the Bombers did over fall break in their crucial final conference matches of the regular season. After losing a close match against St. John Fisher College on Oct. 20, the Blue and Gold came back the next day and won their matches against Utica College and Nazareth College to secure the third seed in next weekend’s Empire 8 tournament.

After a close 27-29 loss in the first set against Nazareth last Sunday, the Bombers defeated the Golden Flyers 25-13 in the second set. Weil said it was a crucial turning point for the team.

“You could see us actually playing together and all wanting it and really giving it our all,” Weil said.

Donovan said securing a postseason spot means the Bombers can now use their last two regular season matches against SUNY-Fredonia and Hiram College more as tune-ups.

“It works out really well for us,” Donovan said. “We’re going to play two really good teams, and hopefully they’ll get us tournament-ready to take on Stevens.”

Weil said she’s fairly confident the Bombers can keep their run going, both at the Empire 8 tournament and in Saturday’s rematch against SUNY-Fredonia.

“If we can play as well as we did against Nazareth, we can destroy them,” Weil said.