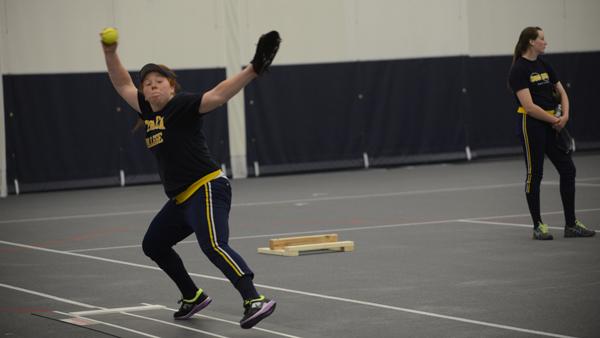 Before the Bombers’ game against Husson College earlier this season, Head Coach Deb Pallozzi had a difficult decision to make. With a bevy of talented pitchers at her disposal, Pallozzi sent out freshman pitcher Allison Macari to the pitching circle. In her third game of her college career, she threw a complete game surrendering only one run and achieved her first career win as a Bomber.

Macari is part of a freshmen class that has been invigorating the Blue and Gold this season. In the first 10 games of the season, five of the nine freshmen on the Bombers’ roster have seen significant playing time.

The freshman make up nearly half of the squad this season compared to last year’s four. This season, five of the freshmen have started in at least five games and have helped lead the team to a 7–5 start.

Gavin said she wasn’t expecting so much playing time early on this season and said seeing the field has motivated her to earn more minutes.

“I’m so grateful for [playing time], but it’s pushing me more to know that I’m not satisfied with just that,” Gavin said. “I don’t think anyone’s satisfied with what they have, they’re always trying to work harder.”

The shift from high school to collegiate play can be challenging for athletes, but Gavin said the intensity and focus during practice has allowed for a smoother transition. She said the practices have prepared her for the increased speed of play at the collegiate level.

“The practices are as intense, if not more intense than the games,” Gavin said. “During practice, we’re not going through the motions; we keep the energy up and cheer everybody on just like we would in a game.”

Macari has been tested early on in the regular season quite often. She is one of three freshman pitchers complementing ace starter junior Sam Bender. In seven appearances, Macari is 2–3 with a 4.36 ERA and leads all pitchers with 14 strikeouts.

When in the center circle, Macari said she felt comfortable knowing that her teammates have trusted her to pitch and give the team a chance to win.

Macari and Gavin said it has been easier to transition onto the team and make a difference because they can relate to different veteran members of the team. Macari and junior infielder Julianne Vincent were teammates at Westhill [Conn.]High School, while Gavin looks toward senior captain Molly O’Donnell, who was also a starting outfielder in her first year in the program.

Gavin said O’Donnell and other veterans have made the position players comfortable with adjusting to different fielding positions so they have a greater flexibility in game situations.

“Everybody’s gone through it,” Gavin said. “Nobody came in saying, ‘I play this position’ and that’s the only positions they play, which gives everybody something to relate to as a team.”

O’Donnell said it is easy to assist the freshmen, considering the competitiveness and skill level as a whole.

“They all want to be the starters in their positions and are constantly making those adjustments to get better,” O’Donnell said. “Hitting-wise, everyone of them can hit, and coach has always said, ‘If you’re a hitter, I’ll find a spot for you,’ and we really have hitters one through nine.”