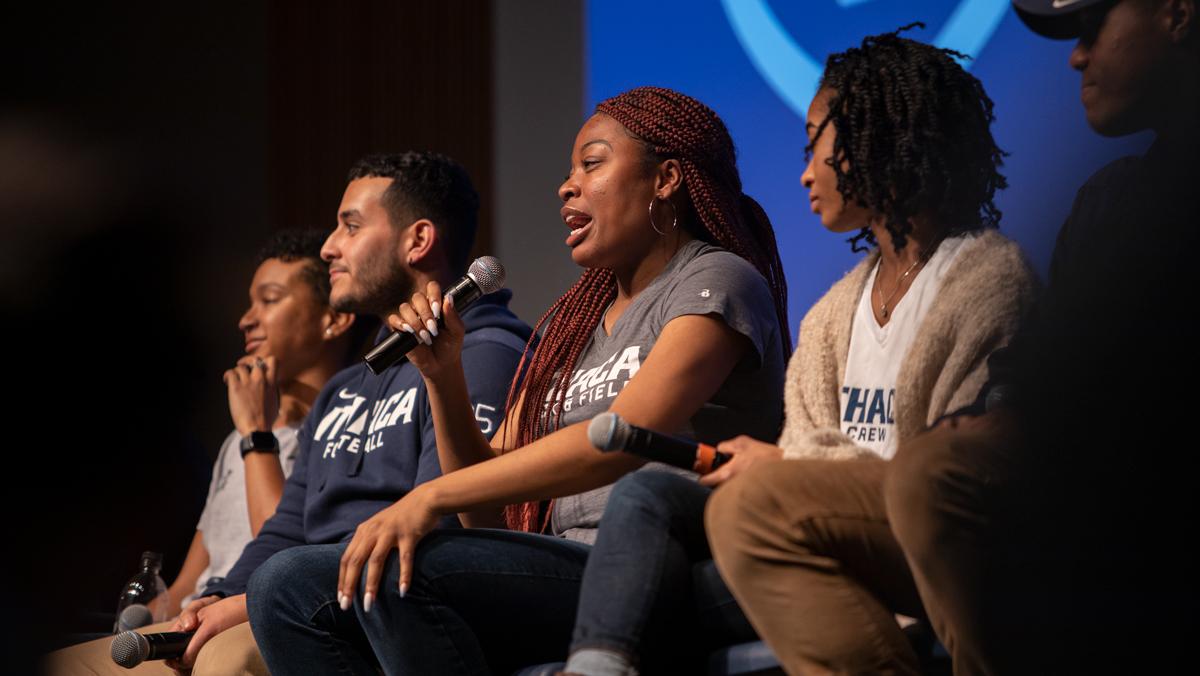 A panel of student-athletes of color spoke in front of teammates, coaches, and members of the Office of Intercollegiate Athletics about their racial identities and experiences Jan. 21. The panel discussed the lack of diversity on the college’s sports teams and the needs of athletes of color.

The office hosts a Voices of Experience event at the conclusion of every semester for student-athletes to discuss various aspects of leadership. Erienne Roberts, associate athletic director and senior woman administrator, said that this is the first time that the event has been centered around race. Roberts said the theme of the event was inspired by a commentary published in The Ithacan by sophomore Katelyn Hutchison, who is a member of the women’s track and field team. The commentary addressed the lack of spaces and community for athletes of color within the athletics office at the college.

“Susan [Bassett, associate vice president and director of intercollegiate athletics and recreational sports], read it, and she wanted to meet … to hash out what exactly was going on,” Hutchison said. “We went through some of the issues that were going on. That’s not to say that she was naive in it, but we were just open about how we were feeling.”

Hutchison was one of six student-athletes included on the panel. She was joined by two football players, senior Kendall Anderson and sophomore Donte Garcia; senior Devon Morris, a women’s soccer player; sophomore swimmer Tim Hector; and junior rower Mikayla Henry. The discussion was moderated by RahK Lash, interim director of the Center for Inclusion, Diversity, Equity and Social Change (IDEAS).

“Student athletics is a huge part of that undergrad experience,” Lash said. “To see them show up sends a signal that this matters. No matter where they are in their conversation, they’re comfortable with having a conversation about race identity. For me, it means everything.”

Lash led the student panelists through conversations about how their experiences as athletes are impacted by race from recruiting to their taste in pop culture. Morris is from Atlanta and said she felt isolated as the only Southerner and one of the few black women on the women’s soccer team.

“I lived in Eastman my freshman year because I’m an MLK scholar,” Morris said. “Some days I was just like, ‘My team does not get what’s going on right now.’ I would be like, ‘Just make it through practice, and then you get to go home to MLK. You get to go home to Eastman. That’s where all your POC friends are.’”

Morris also addressed the challenges of hearing white teammates sing the N-word in the locker room while listening to rap music to get pumped up before games or practices.

“Everybody knows the words and where the N-word is supposed to come in, and someone would say it,” Morris said. “They or somebody else would look at me, waiting for me to say something about it. This would be right before a game. I’m focused on going out on the pitch … and there’s this weird atmosphere where … black Devon is supposed to say something right now.”

Hutchison said that music is how she expresses her culture and that having a majority-white team makes it more difficult for her to be herself at practice and in the weight room.

“It’d be the same pop songs or rock songs all the time, and it’s not that I don’t listen to that music, but it’s not something I use to get hype,” she said. “Just little things like that tack on to make me feel out of place sometimes. I honestly feel like if I was to say, ‘Hey, let’s put on [rap music] with my team, that probably wouldn’t fly.”

Junior Sarah Lachenmayr, a member of the women’s track and field team, said that hearing about Hutchison’s experience was emotional for her.

“I’ve always thought of Katelyn as not just a teammate, but a friend,” Lachenmayr said. “She’s in my event group, and I spend a lot of practice with her. It breaks my heart how alone she felt last year.”

During the panel, Morris described the college’s stance on race as “a lot of talk without a lot of actions.”

Roberts said the office has several plans to continue educating athletes and staff about diversity and inclusion in the future. She said that a debrief session of the panel will be held with coaches in the coming weeks and that the office will soon be rolling out a diversity and inclusion working group. She also said it plans to host socials for student-athletes of color to connect.

“We wanted to see what this brought as far as feedback as far as what student-athletes really want,” Roberts said. “We want to make sure that it’s meaningful programming to them. We definitely want to have more smaller, informal conversations, more socials where they can just get together and everybody having a chance to participate in their initiatives.”

Hector said he hopes attendees at the event will take away the message to respect each individual’s unique experiences from their past and at the college.