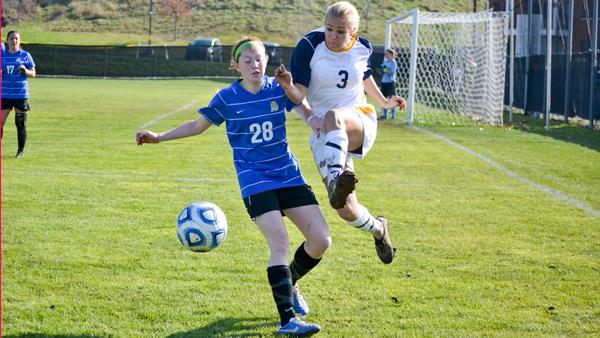 During this past summer, the women’s soccer team’s Head Coach Mindy Quigg sat at her desk and looked over a roster that was stacked with a record-setting senior class and a talented junior class. This was the team she believed would bring the national championship back to South Hill.

The Bombers’ season began in almost picture-perfect fashion when the Blue and Gold started with 12 consecutive victories, including wins against rival SUNY-Cortland and No. 21 Stevens Institute of Technology. After a tie with conference opponent St. John Fisher College on Oct. 7, the Bombers won their next four of five games before dropping a 1-0 decision to Rochester Institute of Technology in the final game of the regular season.

When reflecting on the regular season, senior midfielder Julie Winn said the team was never fazed by wins and losses. Instead, she said, the overall measuring stick was how the team was progressing.

“We knew we had the ability to go undefeated,” Winn said. “The most important thing all season was that we were setting ourselves up to play our best soccer in the championship part of the season.”

During the Bombers’ run to the NCAA tournament, a number of records were also being pursued, most notably the career goals mark by senior forward Rachael Palladino. Entering the 2012 season, Palladino had scored 47 career goals and was in pursuit of the record of 61 career goals set by Chelsey Feldman ’09. Heading into the opening of the NCAA tournament, Palladino had 60 total goals and needed only one goal to tie the record, but Palladino went beyond the minimum requirement and tallied a hat trick with two assists in the Blue and Gold’s first-round victory against UMass-Boston on Nov. 10.

Though Palladino’s hat trick put her atop the career goals mountain, the senior forward said her accomplishment was only a side note to something that was more important to her during the season.

“What has always been most important to me is not the stats but making myself and my teammates better soccer players,” Palladino said.

Palladino wasn’t the only Bomber to rewrite the program’s record books during the team’s opening round victory. Winn distributed two assists and set a new single-season record with 12 assists total to surpass Feldman’s old mark.

After coming back from a 1-0 deficit to defeat Bowdoin College 2-1 in the tournament’s second round, the Bombers were advancing to the tournament’s Sweet 16 for the second consecutive year. Unfortunately for the Blue and Gold, a second consecutive trip to the Final Four was not in the cards. Misericordia University avenged its 1-0 regular season loss to the South Hill squad Oct. 2 by advancing on penalty kicks 6-5 after 110 minutes of scoreless play Nov. 17 on Carp Wood Field. A sense of disbelief fell over the Bombers; it was the last game for the seniors, who during their years of play had come close to a national championship several times.

Despite falling short of the Final Four, where they were last season, the Bombers still had plenty of accomplishments for which they can hold their heads high. Senior goalkeeper Becca Salant posted 14 shutouts and ranked 5th overall in Division III in save percentage. Meanwhile, the South Hill squad’s offense scored 59 goals and only allowed only eight goals in regulation. Collectively, the seniors won 63 games during a four-year span.

When reflecting on the efforts of the six seniors, Quigg said their efforts will help future Bombers teams take the next steps in their national championship runs.

“The one special thing is that they all have a very high work rate, and they’re very competitive, they have very competitive personalities,” Quigg said. “Our whole senior class have been good leaders.”