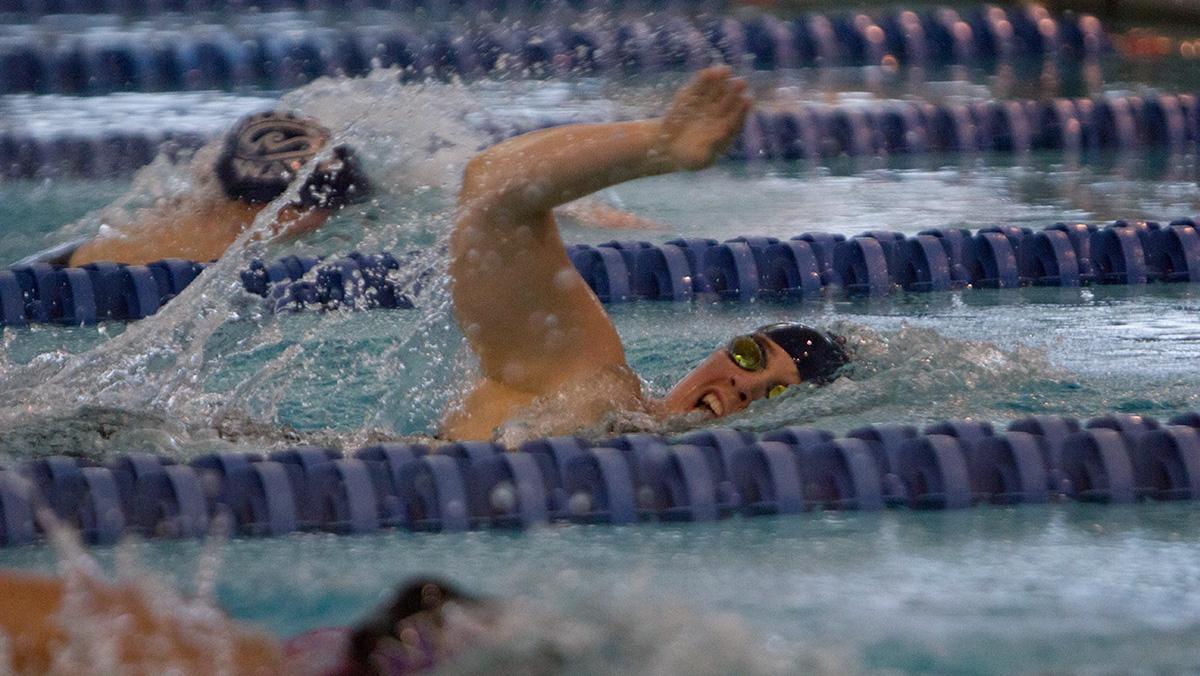 CAITIE IHRIG/THE ITHACAN
Senior Brenna Dowd raced in the 1,650-meter freestyle at the Bomber Invitational on Dec. 4 in the Athletics and Events Center. She placed fourth with a time of 18:04.70.
By Max Prestwich — Contributing Writer
Published: December 4, 2016

The Ithaca College men’s and women’s swimming and diving teams competed in the Bomber Invitational on Dec. 2–4 at the Athletics and Events Center.

“Having them come in here and focus on this event, with everything else going on, and to be so successful, and to bring such high energy in what really is a marathon of an event, they did fantastic,” Miller said.

Assistant coach Dan MacQuarrie said the coaches were impressed with how well the team performed considering they are in the middle of their season.

“We’re definitely happy with the results we saw this weekend,” MacQuarrie said. ”We’re not close to being tapered or anything, we just kind of gave them a couple days to rest and they ended up performing at a level much higher than we were expecting.”

Relays proved to be a huge strong point for the team over the weekend. In the 200-medley relay, sophomore Jaclyn Pecze and seniors Grace Ayer, Samantha Reilly and Lake Duffy finished first with a time of 1:44.47. This not only broke the school record set in 2009, but also gave them an NCAA B cut time.

In the 400-medley relay, Ayer, Reilly, Duffy and freshman Justine Wantz finished first with a time of 3:51.49, missing the NCAA B cut time by .08 of a second.

The Bombers also placed first in the 400 freestyle relay, when Duffy, Pecze, Ayer and senior Cassandra Papaleo posted a winning time of 3:32.55.

The men’s team collected 1010.5 team points over the course of the invitational, which was also good enough for a second place team finish. SUNY Geneseo finished in first after racking up 1685 points, while Hartwick College finished in third with 939 points over 21 events.

Assistant coach Lucas Zelehowsky said the team did a good job of staying at the top of their game all weekend.

“I thought they did very well,” Zelehowsky said. “Top to bottom, from the first afternoon we started swimming, most of the guys were almost hitting best times all the way through the meet.”

Standout performances included a first place finish in the 200 freestyle relay with freshman Nathaniel Bartalo, sophomores Aaron Levin, Kellen Scanlan and senior Adam Zelehowsky claiming a time of 1:25.01. Freshman Andrew Mikhailichenko had two first-place finishes of his own when he posted a winning time of 58.27 in the 100-meter breaststroke, and a season-best time of 2:07.05 in the 200-meter breaststroke.

Both teams will return to action at the Henry Kumpf Invitational at noon Jan. 14 in Troy, New York.