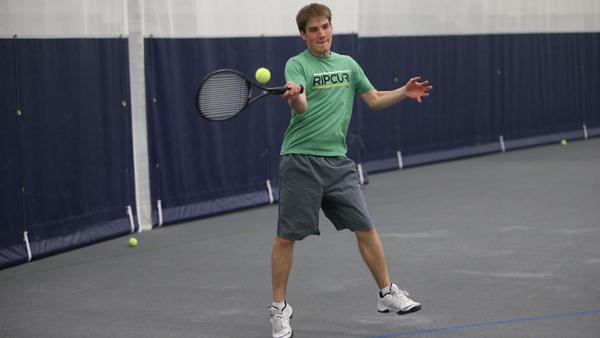 This year, the men’s tennis team is building for the future by serving out a young team with five freshmen and one senior. While the team hasn’t found much success so far this season, it is developing a team that looks to take the Empire 8 conference by storm within the next couple of years.

Over spring break, the team went to South Carolina to compete in three matches. Head Coach Bill Austin said he is noticing growth in the freshmen this year even though the team has lost every match. He said this is what he had planned as the team heads into conference play.

“They are getting stronger and more confident,” he said. “They just need more seasoning. Part of what this spring break trip [is for] is gaining more confidence and making sure that we are as prepared as we can be for the April push.”

So far this season, many of the wins for the Bombers have come from the middle of their lineup, which consists of young talent. Freshmen Zach Lipson, Chris Hayes and Jonathan Smucker have combined for five of the team’s 15 singles wins this year. Hayes said though he is finding success, there is always something to improve on.

“I know my teammates want me to improve my doubles game to add to my game, because doubles is just as important as singles,” he said.

The young players have had to make a difficult transition from the high school game to the college game. Hayes said this transition has been eased by experienced older players. Freshman Joey Hanf said he has learned much from his teammates who have been through the same experience, like senior captain Kyle Riether, who has shown his leadership both on the court and off it while recovering from an injury.

“Riether has been an awesome leader and influence on me,” Hanf said. “He’s been fighting back from a tough injury all year, but he’s a great role model for the team.”

Hayes said having a number of coaches on the team has been beneficial because several players at a time can get individual attention on a specific facet of their game.

“Having Bill and the other coaches has really helped me,” he said. “All the different skill sets the coaches have are helping improve my serve and focus on the court during matches, and I feel like I have improved alot since the fall.”

Out of all the freshmen, Austin said Lipson has had to take on the most difficult roles. As one of the top three singles players in every match so far, he is put up against the top competition on the opposing teams. Though he has struggled at times, with a singles record of 1–9, Austin said, he has noticed much improvement from Lipson, one of his key players.

“He’s learning the game by leaps and bounds,” he said. “He has great athletic ability, he has a great serve and he is starting to become more confident in himself. Every time he goes out he is learning something new, and he is retaining it.”

Though the season isn’t starting off as well as Austin said he hoped, there is much to look forward to. The team has a talented young core and is only losing one player after this season ends, so Austin said he is looking forward to a great future with a lot of young and improving players.

“We’re building depth right now,” he said. “If we keep the depth building and we get a good recruiting class in and we’re only graduating one senior, it doesn’t take much to turn it right around.”