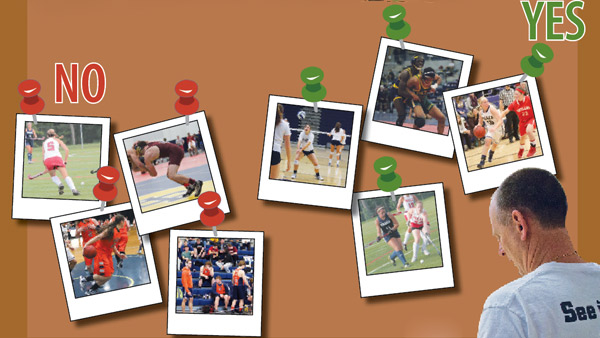 Head wrestling coach Marty Nichols looks down at his phone as it vibrates in his lap outside the wrestling team’s practice room in Hill Center. Interrupting his description of recruiting as a year-long process, he laughs.

“A recruit just texted me,” he said.

According to the National Collegiate Scouting Association, the recruiting process for Division III sports allows coaches to have unlimited contact with athletes and their parents following an athlete’s junior year. This is a luxury that Division I and Division II athletic programs don’t have, as they have restrictions as to when they can contact recruits. Unlike Division I and Division II schools, which offer athletic scholarships as an incentive in their recruitment process, Division III colleges can only offer academic scholarships and need-based financial aid, which prospective athletes must accept before committing to their respective teams.

Nichols was a three-time All-American as a student and has coached six individual NCAA champions. He has also been coaching the wrestling team for 17 seasons, and he said recruitment has very little down time.

“A lot of kids send you a link of their competitions and matches,” he said. “You can just watch them online so you don’t have to go out as much. That’s the process we’re in right now. But in March, we will be on the road to go and watch these guys in their end-of-season competitions, their state championships.”

Nichols said checking in with the recruits is important. He tries to find wrestlers who have the whole package — not just in a specific weight class.

“Right now, you’re trying to get all the recruits to finish up their applications and getting all their recommendations in,” he said. “We have a list of people, and we check them off with how they are academically, what kind of kids they are, if they’re good citizens and if they’re good students. You try to find the right fit. It’s a constant machine that’s going.”

“You try to target some weight classes, or more lightweight, middleweight and heavyweight, not necessarily the specific weight,” he said. “The kids that have been coached well but also the ones that don’t have a lot of coaching but have a lot of raw talent.”

Unlike wrestling, which is a sport of one-on-one competition, field hockey is a game based on teamwork, communication and chemistry. Bombers field hockey head coach Tracey Houk has been recruiting players for 18 years. She has seen four NCAA playoff appearances and coached four All-Americans. Over the years, Houk said the recruiting process has changed over the years, but it continues to be difficult because of the amount of players she has to review. But, as the years have passed, recruitment videos have become easier to show coaches, as most are put online.

“Sometimes the players don’t understand exactly what is going to benefit them,” she said. “If I look at a video, and I watch past two minutes, then it’s probably a decent player. Within the first two minutes, if you’re not catching my eye, I think, ‘Hmm, I’m not so sure about this one.’ You know, technology has made life so much easier but also so much more difficult at the same time.”

The majority of Ithaca College’s varsity sport programs don’t have full-time recruiting positions. In fact, only $79,134 was allocated to the teams for recruitment for the 2012–2013 year. In 2000–01, the women’s athletic teams only received 28 percent of the total college funds for recruiting. Because of Title IX compliance, the women’s athletics teams now receive 51 percent of the total recruiting funds as of the 2012–13 year.

“[Bassett] believes that recruiting is going to get us better players and better teams and ultimately, success,” Houk said. “I feel that more effort is going to be put into recruiting, and I expect that we are going to get more support in that.”

Houk also uses online tools for recruiting, watching players on YouTube and viewing their personal profiles on Huddle, a video software that allows athletes to upload personal profiles as well as clips to make it easier for coaches to see their footage. Houk also attends national recruiting events that attract players from several states, including a four-day trip to Disney World in Orlando, Fla., and she incorporates her players in the recruiting process as well.

“When you think about it, you’re trying to bring players in that are going to fit in with your team, so having them meet with your recruits are important,” she said. “The interaction is important for the recruits to see what your team is like and important for the team to see what the recruits are like, especially away from the interview with the coach. Once they step away, they may present themselves in a different way and you find out a lot.”

Danielle Coiro, a junior who finished her third year this past season, said having recruits meet with them is important for team bonding.

“We just started a clinic that we put on right before winter break so [recruits] come to the clinic and play field hockey,” she said. “We see how they interact with all of us. We want them to feel comfortable.”

Houk said having the Athletic and Events Center is also a big attraction to recruits who come to visit. She understands that recruits are looking at other colleges too, but she credits the college’s facilities as a reason why some decide to become a Bombers.

“You’re looking at a lot of different things to try and reel some people in here,” she said. “Usually for me, when I get them in here, they see that our programs are awesome. They see this place, they see where we train, they meet my team and they have stars in their eyes. They are sold; they think it’s amazing.”

Another head coach who does her own recruiting is volleyball coach Janet Donovan, who has been at the helm for the volleyball team for 22 years. Her team was very young and featured several freshmen that she recruited to the program last season, including the team’s leading scorer, outside hitter Shaelynn Schmidt.

Schmidt caught Donovan’s eye after her performance at one of the Ithaca College–hosted summer volleyball clinics, where interested student athletes get to visit the campus and showcase their abilities. Two high school seniors have already committed to the college for the 2014–15 academic year after applying for early decision on Nov. 1. Donovan said one of the joys she gets out of recruiting is when she finally obtains a prospect she had been calling, texting, emailing and scouting for months.

“It’s fun because it’s like winning the lottery when you get a student athlete interested in Ithaca [College] and she commits,” she said.

Outside of clinics hosted by the college, Donovan uses other tools to find potential prospects. One upcoming recruiting event she will attend is the Las Vegas Classic, which takes place Feb. 15–17. Hosted by the SoCal Volleyball Club, this event will feature approximately 7,000 athletes from the West Coast who will showcase their abilities in front of collegiate coaches from all divisions. This year will be the second time Donovan has attended this event. When she attended last year, she recruited her starting outside hitter, freshman Grace Chang, originally from San Jose, Calif.

Chang said even though she was recruited by multiple teams, Ithaca College was her top choice.

“I sent my recruitment video of the highlights of my best plays to various coaches, and when I sent it to Ithaca’s, [Donovan] responded right back to me right away and told me that she had a spot open for me already on the team,” she said. “I took a week-long trip to visit all of the schools I was getting recruited from, and it just came down to which team I liked the best, the girls, the coach, and that’s how I decided to come to Ithaca.”

Donovan uses a combination of traditional game scouting and online scouting to find the best possible prospects. She said technology helps her expand her reach, which is helpful because she doesn’t have a full-time staff to assist her in finding players.

“I do all of the recruiting,” she said. “I only have part-time staff. With this process, yes, there is a lot of work involved, but recruiting is your lifeline. Usually, in Division III, we don’t have the budget for multiple assistant coaches, or they are only part-time. We’re one of the few teams here on campus that doesn’t have a full-time staff yet.”

Though some trips bring her across the country, Donovan does her fair share of local recruiting, using other coaches to help sort through recruits.

“I have good friends who coach at Colgate [University] or Cornell [University], and when they go to different tournaments that I’m not at, they will let me know through word of mouth that, ‘Hey, this kid looks pretty strong. I think she may be interested in Ithaca,’” she said.

Donovan uses online recruiting tools such as the Front Rush and National College Scouting Association websites. Upon filling out a questionnaire, coaches can find student athletes in the Front Rush database. She then contacts them via email and informs them of clinics that they may attend if they chose to pursue Ithaca College. The NCSA website allows players to upload videos, bios and contact information on themselves for coaches to view and sort through. Technology has made the recruiting process easier for Donovan, as she said it helps bring players to her attention who she may have never known about otherwise.

“I really want to see if she’s Bomber material,” she said. “I want to recruit the whole student athlete and not just the volleyball player. Does she really take her academics seriously? Does she know why she’s coming to Ithaca College, and it can’t just be for volleyball.”

Unlike Donovan, head women’s basketball coach Dan Raymond has the help of assistant coach Katherine Bixby ’12 to handle both in-season and offseason recruiting. They begin evaluating players in the spring, as soon as their regular season ends. The AAU spring season serves as a jumping off point where Raymond and Bixby begin to look through players.

Despite being in the middle of the season, Raymond still spends his spare time contacting recruits to stay involved with the yearly process.

“I use my time driving home to make recruiting calls, and that’s probably three days a week,” he said. “I’m on the phone all the way home for a half hour. It fits well into my schedule. And then a lot of times I will also make additional calls once I am home.”

After they identify which players they would like to pursue, they make trips whenever possible to see them play. The two of them have made several trips along the East Coast in the past few months to scout talent. Raymond said finals week in December serves as a time when they can travel around to different games to evaluate players.

“Before Christmas, during finals week, we didn’t practice,” he said. “We were both gone that entire week recruiting. Every day we were someplace.”

Raymond and Bixby traveled to Philadelphia, New Jersey and the New England area during the past few months. From these trips, an unnamed high school prospect has already committed to Ithaca for the 2014–15 season. Raymond said he is excited to have her joining the team next year.

“She’s paid her deposit, and she’s coming from a really small school — 24 kids in her graduating class,” he said. “She’s a 2,000 point scorer in high school, so she’s used to being able to [exert her] free will on the court and her teammates respond well to her.”