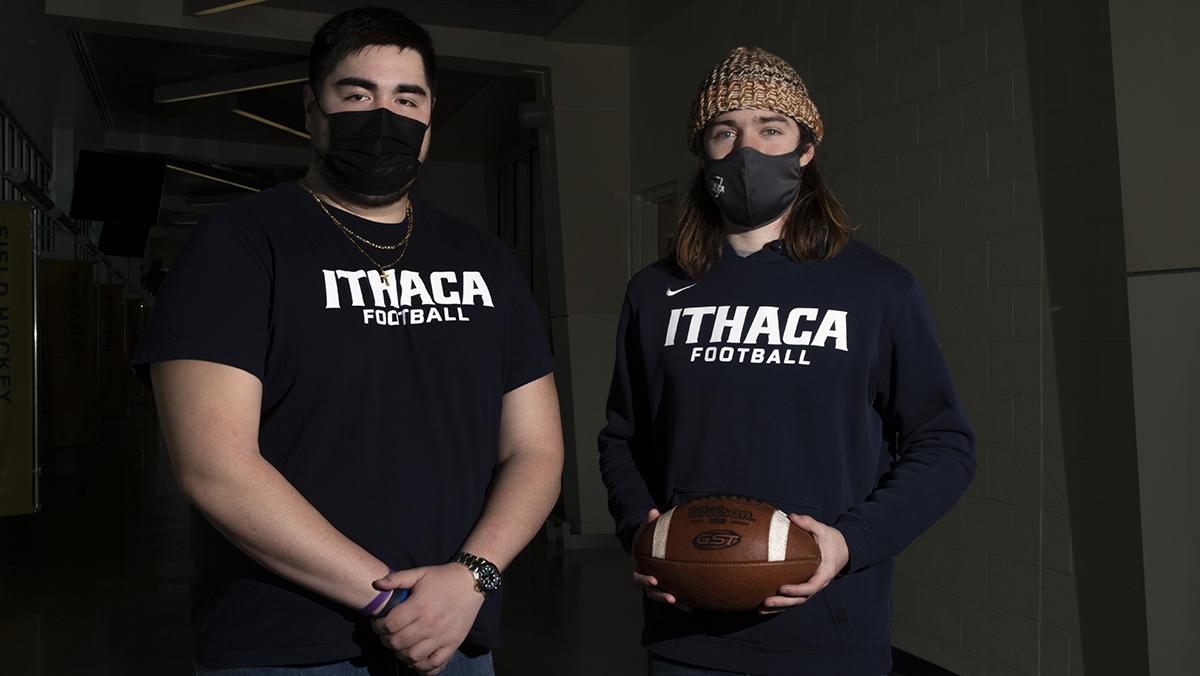 At the end of each season, student-athletes across the country are rewarded for their excellence on the field with All-American honors. Three Ithaca College standouts received this distinction for the Fall 2021 season, gaining recognition for the college’s football and field hockey programs.

On the gridiron, junior kicker Nick Bahamonde and senior offensive lineman Jake Villanueva etched their names into the record books by becoming the first pair of Bombers teammates to be presented with the award by the American Football Coaches Association (AFCA) in the same season. The pair also earned spots on the Associated Press’s (AP) All-America teams, and Bahamonde received the honor from D3football.com. Senior field hockey midfielder Jackie Mirabile also joined some exclusive company, becoming just the 29th All-American in the program’s history.

Mirabile was named a Third-Team All-American by the National Field Hockey Coaches Association (NFHCA), taking home the award just two years after her teammate, senior Morgan Mullen, did so in 2019. Mirabile said she is humbled by the award and attributes her success to the support she received from members of the program.

“I’m just thankful for my coaches and former teammates and teammates now that have gotten me to where I am,” Mirabile said. “To go down in the history books as an All-American and join the names of everyone else who came before me, it’s just an incredible honor.”

Mirabile was an integral part of the team’s success during the 2021 campaign, helping guide the squad to a 14–5 record and first place in the Liberty League. The midfielder was impactful on the offensive side of the ball, posting three goals and a total of eight points. She also recorded a defensive save in the Bombers’ 1-0 overtime loss to Vassar College in the Liberty League final on Nov. 6, 2021.

Mirabile is just the sixth Bombers player to be named an All-American by the NFHCA. Coaches nominate their own players for this honor and are ultimately chosen by NFHCA member coaches and committees.

A total of 48 NCAA Division III field hockey players received this recognition, comprising three All-American teams. Kaitlyn Wahila, field hockey head coach, said that while the award is based on performance on the field, Mirabile makes just as strong of an impact outside of competition.

“Jackie is just a really incredible person off the field and has been an amazing leader for our program,” Wahila said. “And of course, clearly her skill on the field has really just proven itself over the last four years that she’s been a part of our program.”

Senior striker Samantha Horowitz echoed a similar sentiment, mentioning how Mirabile’s style of play contributes to the team’s success. Mirabile recorded a pair of assists during the campaign.

“She’s such a selfless player,” Horowitz said. “I think having that ability to put your teammates before yourself is just a huge characteristic.”

Bahamonde and Villanueva also demonstrated leadership and ability on the field, aiding in the football team’s 8–2 season. Former head football coach Dan Swanstrom said both players demonstrate strong work ethics, which has a significant impact on their teammates. The coach announced he was leaving the program Jan. 24.

“Both positions are unique, it’s a position where their leadership is truly by example,” Swanstrom said. “What they do day in and day out, how they practice, how they handle the weight room, those things are how they lead.”

While the contributions of both student-athletes extend far past the gridiron, the AFCA award is also based on individual performance. Recipients of the award are chosen by the AFCA selection committee, which is composed of head coaches across the nation.

Bahamonde was dominant in his junior season, going 18-for-22 on field goal attempts and converting 32 of his 34 extra-point tries. This precision led to Bahamonde being named a First-Team All-American by the AFCA and the AP. The kicker also was recognized as a Second-Team All-American player by D3football.com. He is just the second kicker in the history of the program to be named an All-American since 1992 when Ed Mahoney ’95 got the honor.

Alternatively, as an offensive lineman, Villanueva’s personal contributions are difficult to quantify. However, the senior’s impact was evident in the squad’s offensive success, helping the Bombers post an average of 30.6 points per game. This offensive output was the second-best in the Liberty League, trailing only Hobart College, who went 9–2 this past season.

Villanueva was named a Second-Team All-American by both the AFCA and the AP. He said that while his position doesn’t often make headlines, he is grateful to be recognized for his efforts.

“It’s just good to see all the hard work that you put into the sport pay off,” Villanueva said. “Especially being an offensive lineman, you’re not really always in the spotlight as much as some of the guys on the other team. But, [I] also definitely wouldn’t have been able to be an All-American without my teammates and coaches, obviously pushing me every day to be my best self.”

Division III football coaches across the country have selected 18 All-Americans from the college for this honor since 1969. Former wide receiver Will Gladney ’20 was the last player to bring the award back to South Hill, being named to the AFCA Second Team in 2019.

Bahamonde said sharing the honor with Villanueva and being the first duo to win the award in the same year has made the experience even more memorable.

“It’s cool to think of stuff in a perspective like that because you just win [the award] this season and it’s hard to think back on just how special it is,” Bahamonde said. “When you hear stuff like that it makes you take a step back and be like, ‘Wow, that’s just crazy that I get to be a part of that with him.’”

A total of 155 Bombers have been named All-Americans in the history of the program, including 10 selections from six players in Swanstrom’s four seasons at the helm. Bahamonde said he is honored to be named among the best in the sport and considers this recognition to be one of his greatest accomplishments as an athlete.

“There is something to being an All-American, that I can tell that to anybody now and they get it,” Bahamonde said. “I can put that on a résumé and anyone will know what an All-American is. So, I’m really proud of this one, I think it’s special.”