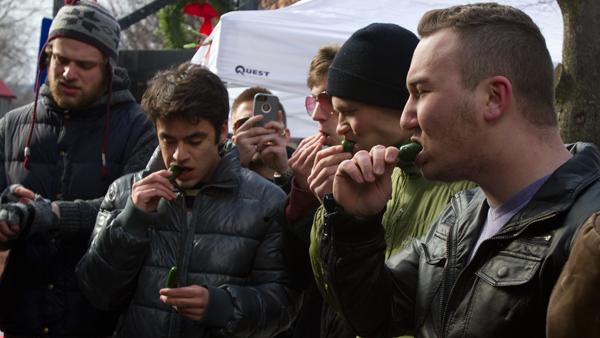 Every February, restaurants set up booths around The Commons to sample their wares and compete to be named the creator of the “Best Chili in Ithaca” in either the meat or vegetarian category. Local chefs scour their recipe books looking for the one set of ingredients that will put them on top.

But for the festivalgoer — the heat seeker, consumer of fiery dishes, veggie and meat alike — Chili Fest’s top prize is first place in the hot pepper-eating contest.

Each year, this burn-inducing competition has attracted people around the city to test their mental and physical fortitude. The pepper-eating contest has been one of the flagship events of the annual Downtown Ithaca Chili Cook-Off since its inception.

Participants have stepped up in front of the festival’s largest crowds to eat every kind of pepper, from mild poblanos to tongue-searing ghost peppers. Contestants have to bear the heat of the most famous member of the pepper family — the jalapeño — for the chance to be the champ.

“The hot pepper-eating competition lets everyone in the community go head to head to see who is top dog — who can handle the heat,” Patty Clark, events manager for Downtown Ithaca, said. “Only one person can be the hottest chalupa.”

For two years running, that chalupa was me, and this year I sought out glory once again, chasing after a three-peat.

In 2011, I entered the contest as a freshman with bright eyes, a bushy tail and an empty wallet. I wasn’t really interested in chili supremacy, but I was definitely enticed by the $50 gift card that went to the winner. I was a lot broke, a little drunk and knew a win would cover about 20 slices of pizza. So, I signed the contest’s don’t-sue-me-if-these-peppers-kill-you waiver and stepped on stage alongside 14 eager competitors — a ragtag group made up of young and old, men and women, students and townsfolk.

The emcee went down the line and contestants introduced themselves. Previous pepper-eating champions. A hot dog eating contest winner. A townie and a student who had both put down ghost peppers in their day. And me.

“What makes you think you can win this competition?”

“Whenever I order chicken wings, I pick the hottest sauce,” I replied. “I guess that’s all I’ve got.”

The crowd let out a hearty laugh at my uncertainty, the emcee moved on and the eat-off began.

The competition was an adrenaline rush. The roar of the crowd toward the end of a round, the pain of the heat coming from the pepper’s capsaicin seeped into my tongue and the thrill of moving on to next round were exhilarating. I fed off of the excitement of the contest. When the audience cheered, I ate faster. When another competitor picked up speed, so did I.

In the beginning, I was an underdog, but in the end, I took home the championship for the first time. The only feeling that matched my sense of pride was my yearning for a glass of milk.

“The winner, obviously, gets gloating privileges for the full year,” Clark said. “That’s what it’s all about.”

I felt like Ithaca’s Michael Jordan of competitive eating. So, when February rolled around the next year, I joined the contest and met similar success, winning the championship against a field of 29.

As this year’s hot-pepper eating contest grew near, contestants began training for the event. Ithaca resident Doug Moorehead said he prepared by chewing mass quantities of bell peppers to up his chewing speed, while others ate Habanero peppers to train for the spice. Legend has it that some competitive eaters have eaten whole heads of lettuce and drank entire gallons of milk before a contest to expand their stomachs and fit more food in.

Very much aware of these training methods and equally as confident in my natural pepper-eating abilities, I chose not to train, thinking a two-time champ didn’t need to.

As Saturday rolled around and the 2013 contest was approaching, I sauntered into Chili Fest an hour or so early and stood by the signup table to scout the competition. Five stood by the signup table, awaiting registration. Three were Ithaca College students, playfully jostling with friends that were ready to watch their respective buddy embarrass himself in front of a crowd.

One was an older man, seemingly in his early 50s. Dressed in a worn Carhartt jacket, a pair of jeans and work boots with more than a few miles on them, he stared intently ahead as he quietly waited for his opportunity to sign into the contest. Everything from his thick, luxurious, graying beard to his steely gaze said he was an experienced pepper eater, ready to beat the heat.

The other was Aleks Racenis, an Ithaca resident, ready to enter the pepper-eating contest for the first time, fresh off of a final round defeat in the tomato toss. Standing tall at about 6 feet, Racenis waited in line and joked around with other competitors. With an affable confidence, he smiled, grabbed a pen off the table, thanked the people behind it for hosting the event and signed his name on the waiver.

“Gather round!” Medcalf yelled, her voice booming through the cold, winter air. “We have a chili pepper-eating contest about to begin.”

The crowd responded. Dozens looked on, creating a horseshoe around the eaters, pumping up their favorite competitor or chatting with friends. The atmosphere was electric, and a buzz was building around the tent as contestants selected their pepper.

“For the preliminary round, we want to find out if you can handle the heat,” Medcalf said. “You must eat one jalapeño in one minute. Three, two, one — go!”

I took a small bite into the pepper — its seeds spilling out onto my tongue immediately turned the temperature in my mouth from “comfy” to “annoying.” The heat was tolerable, so I kept on chewing.

Before I could finish my first bite, I heard a loud cheer from the crowd.

“We’ve got our first finisher,” Medcalf said. “He took that one down easily.”

It was the bearded man. He came into this contest ready to eat. Dammit.

I finished my pepper shortly after and waited out the final 30 seconds of the round. When the minute ended, the emcee asked every competitor to stick his or her tongue out to make sure every bit of the pepper had been swallowed. Down the line she went, nixing two competitors before clearing me for the next round. As she continued down the line, the bearded man, red-faced and watery eyed, threw one hand up in the air and walked out of the competition and into the crowd.

Rounds came and went, and untested palates dropped like flies until the final round. Only three remained. One was Racenis.

“How have you prepared for this competition, Aleks?” the emcee asked.

“I have two brothers and everything we did was a competition, so I’m used to this kind of stuff,” Racenis said with a laugh.

“What about you, Taylor?”

“I was just born with this talent, I guess,” I replied, assured of my eventual victory.

The final round of the chili-pepper eating contest was about speed. The first contestant to finish two peppers would be the winner.

The round began and all three of us jammed a jalapeño into our mouth and began chewing as fast as we could. The heat had mounted from the past few rounds, and I began to sweat a little. I was in a good rhythm and the first pepper was down, but the crowd’s eyes were fixed on Aleks. He had already popped his final jalapeño into his mouth, and I had a full pepper still in my hand.

It was game time. I bit into the pepper, furiously swallowed half of it with just one bite and put the rest of the pepper in my mouth, looking over toward Racenis out of the corner of my eye. Chewing as fast as I could, I saw Aleks open his mouth and stick out his tongue, signaling that he had finished the pepper and was about to be crowned champion.

“Oh, you’ve got some seeds on your tongue. You’ve got to clean those off,” Medcalf said.

I was still alive! My head perked up and I chewed through the pain, closed my eyes and tilted my head back to get the last remnants of pepper down my throat, opened them back up and stuck out my tongue confidently.

When my eyes opened, I could see Racenis to my right with his tongue already out and the emcee in front of him checking for leftover jalapeño.

“We have a winner!” she shouted out.

The crowd cheered on the new champion, Racenis, and quickly dispersed as the spectacle ended, and I shook his hand after our audience was gone.

“Ya know, earlier today, I was in the tomato toss and lost in the final round,” Racenis said. “I had a huge motivation to win this one. I said ‘I’m not losing again’. I think it helped me win.”

Racenis left The Commons with a friendly “See you next year” and a pepper-eating championship to his name, while I was left to wallow in defeat and contemplate the loss. Arrogant and cocky, I had walked into the contest assured of my victory and ended up surrounded by those who were motivated for victory and well-trained.

I solemnly walked back to my apartment knowing that Racenis had bested me and that he was right about one thing — he would see me next year. He would see me well-trained and ready to challenge a formidable champion.

Everyone loves a comeback story.