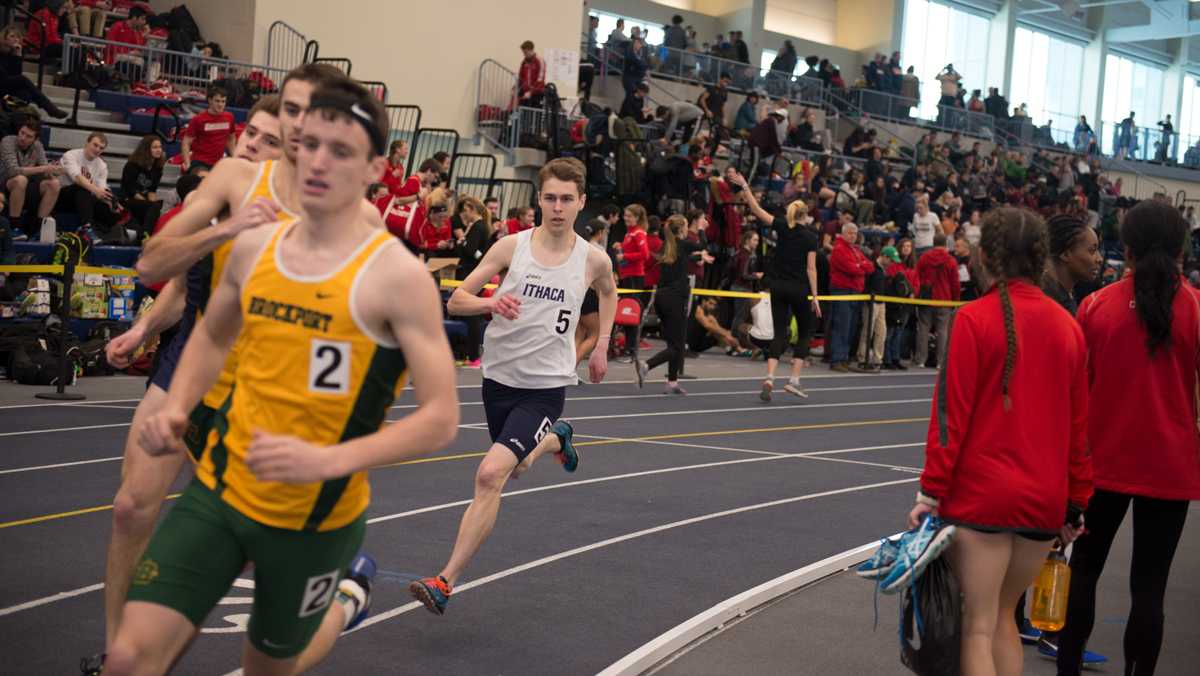 SAM FULLER/THE ITHACAN
Frehsman Jack Culhane races in the 500-meter dash at the Ithaca Bomber Invitational and Multi on Feb. 3 at the Athletics and Events Center. Culhane finished tenth in the race, the highest place of any Ithaca athlete.
By Dani Pluchinsky — Assistant Sports Editor
Published: February 7, 2018

In many college sports, especially at the Division III level, first-year athletes are not expected to make an immediate impact on their teams. But this year’s freshman class for the men’s and women’s track and field teams is performing at a high level.

Freshman thrower Samantha Healy said that when she came to the college, she figured she would rank near last place at meets.

“I figured I would be at the bottom of the rung,” Healy said. “I was not expecting to do big things, but with good coaching comes good athletes.”

At the Cornell Robert J. Kane Invitational on Jan. 27, freshman Sam Ives placed seventh in the 1,000-meter run, earning him Liberty League Conference Rookie of the Week. Healy has finished in first place twice this season in the shot put. Freshman mid-distance runner Jaime Sheppard came in first at the Cornell Invitational in the 400-meter dash. Freshman Sydney Strelec has finished in the Top 10 for the triple jump in every meet so far.

The success of the freshman athletes is largely due to the recruiting process the track and field coaches go through to ensure seniors in high school commit to the college Jennifer Potter, head coach for the women’s track and field team said. Potter said that athleticism is the third quality she looks for in an incoming recruit.

“My No. 1 criteria for any recruit is ‘Are they a good person?’,” Potter said. “Some people are surprised that is my priority but, you can be the best shot putter in the country but if you’re a pain, I don’t want you on my team. The No. 2 thing I look for is academics and then the third is ‘Are they a
good athlete?’”

Potter said a lot of athletes are drawn to the college because of its academics. Potter then tries to target recruits that are looking at the most popular majors on campus.

“Athletes that are interested in our most popular majors like PT, communications and business, we really target those recruits because it is very attractive here,” Potter said. “The education sells itself, bottom line.”

A consistent theme of high school track and field is the lack of necessary coaching to make athletes as successful as they can be. Ives said that his practices in high school were nowhere near as specialized as they are at the college.

“I am getting trained a lot more,” Ives said. “In high school track, practices almost never went longer than two hours. The practices were pretty much unspecialized and lot of people would do the same thing, but in college, we work a lot more.”

Healy said that she felt she had to relearn her entire sport because of the lack of coaching in high school.

“In high school, our coach would tell us to just do these throws and I’ll watch you and tell you what to fix,” Healy said. “It is surprising me to be at the level that I am at out of high school while learning a whole new way to do a sport that I thought I had been doing correctly for four years.”

The individualization of practices can occur because the teams have 10 assistant coaches. Having a larger coaching staff provides one-on-one time for all athletes to receive
specific instructions.

Strelec said the increased intensity of the practices in college has shown improved results.

“It is definitely a confidence booster knowing that the practices are working,” Strelec said. “Since practices are so hard and so intense, it is a really good feeling knowing they
paid off.”

Assistant Coach Matt Wiehe said he is most impressed with the freshmen’s ability to adapt to the training at practices.

“Usually for freshman, it’s hard to get integrated into a program and respond to training,” Wiehe said. “It usually takes a year to respond to training, but they’ve responded incredibly well. Their ability to change and mold themselves into our way of life is very impressive.”

Senior Taryn Cordani said that her training changed from high school and has changed throughout her past four years at the college.

“When I came in I was originally an 800-meter runner,” Cordani said. “My mileage was a lot lower and my long run my freshman year was seven miles, but now it is about 15. As my training has changed over the years, the coaches have realized that I am more of a distance runner.”

Potter said that overall, this year’s freshman class has been great and she looks forward to the future with them.

“They are a great group of freshman and they are confident,” Potter said. “They are competing well and training great, and I think we did a really good job recruiting because we have some really great kids.”

Track and field contends against Division I schools